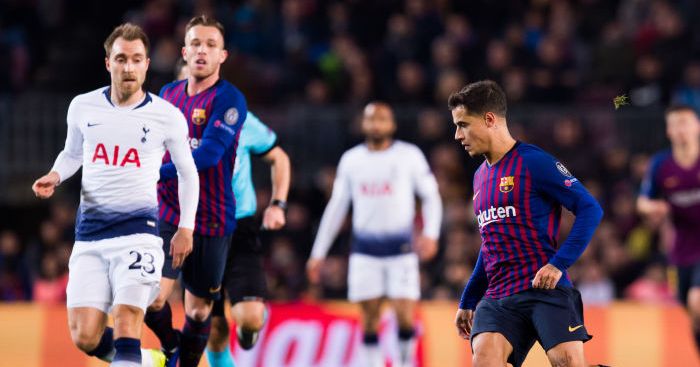 Christian Eriksen received the ball from Eric Dier, turned on a sixpence and played Kieran Trippier into space down the right-hand side. His cross was overhit, but Danny Rose forced James Milner into conceding a foul more Yorkshire than the cast of Emmerdale wearing flat caps and complaining to their whippets about delayed trains.

Tottenham were losing the Champions League final 1-0 with almost 83 minutes played, but were not about to let this opportunity pass too easily. Liverpool would have to fight for their sixth European crown.

Yet that was to be Eriksen’s last contribution in open play. His subsequent free-kick was tipped wide by Alisson, while both of his stoppage-time corners were headed clear by Joel Matip from almost the exact same near-post spot.

The final 12 minutes and 24 seconds of the biggest game of his career and Tottenham’s modern history came and went without Eriksen registering a single non-set-piece touch. Spurs had approximately 65.2% possession in that time; their chief instigator had none of it.

It was a performance that betrayed an immense fatigue, both physical and mental. Eriksen had informed Tottenham of his desire to leave ten days prior, and he never really arrived when they needed him most. Harry Kane, and the decision to start him, was criticised, but his teammate must have been thankful for the lightning rod.

Perhaps that is unfair on Eriksen, one of 26 outfielders whose level fluctuated from poor to average and no higher in Spain. But he created just one of Tottenham’s 11 chances, was one of three starters to fail to make a single tackle, interception or clearance, and is one of a select few linked with Real Madrid and Barcelona.

Considering how well the former have taken to the last player they signed from Tottenham, one who has scored crucial goals in two of his four Champions League final successes, Eriksen would be advised to choose carefully. His does not seem a talent equipped for a revolving door of managers and teammates, an insatiable and volatile support and a sea of white handkerchiefs. The big fish has thrived in a fairly vast pond, but he would be eaten alive in the Bernabeu ocean.

Barcelona might be more suited to the Dane. But they are twice shy, still suffering the bite of importing from the Premier League at great expense. The Spanish champions have expertly extracted the extra from a newly ordinary Philippe Coutinho over the last 18 months, and will be reluctant to repeat the experiment so soon.

But whether or not Eriksen could cope with “the step up” he so craves is immaterial to Tottenham. They will grant their player’s wish to “to try something new” if it suits them and them alone.

This is, after all, the start of “the new chapter” that Mauricio Pochettino promised over a month ago. The manager was not pondering links with Giovani Lo Celso and Tanguy Ndombele, nor offering an unexpected stadium update, when he referred to the “painful rebuild” that will be conducted this summer. He was contemplating the need to break up this happy and loyal family, to replenish this canvas with fresh new colours and change a settled cast.

Since his appointment in summer 2014, Pochettino has sold just five players who have made 100 Premier League appearances for Tottenham. Mousa Dembele left in January, six months before his contract expired, while Kyle Walker only departed after ‘slapping the club in the face’. The other three, Michael Dawson, Aaron Lennon and Benoit Assou-Ekotto, were necessary sacrifices made by a manager eager to assert his authority early.

A lack of signings has masked a general absence of ruthless sales. That must change this summer.

Such admirable allegiance was rewarded with a Champions League final at the end of his first five-year cycle. But the time has come to adapt and evolve, to ditch his Christian belief and place his faith elsewhere.

Their conquerors in Europe provide a useful case study. Liverpool fought to keep Coutinho for years before eventually acquiescing to his wishes in January of last year. Two months later, Jurgen Klopp spoke of both the benefits and the drawbacks of selling your main protagonist.

“When we were not at our best it was always a good idea to give him the ball, maybe he has an idea,” the German noted. “But it was always clear when Phil didn’t play we had to do the job differently, to put responsibility on different shoulders and spread it between the players.

“On a good day it makes you more unpredictable if you don’t have this dominant player but on another day you miss a player like that.”

Liverpool, of course, never really did “miss” Coutinho. They outgrew him and continued to expand without him. He was never indispensable, never a natural fit. They did not replace him because he did not need replacing. Eriksen absolutely would. He is Tottenham’s “dominant player”, the foundation around which they are built, the one with “an idea” when others draw blanks.

But Liverpool’s decision to part with Coutinho was two-fold. It afforded them more tactical flexibility and interdependence, while granting them the opportunity to reinvest in their squad. The initial £105m they received from Barca ensured they had change left over from the purchases of Virgil van Dijk and Xherdan Shaqiri, or paid for both Fabinho and Alisson in full. Liverpool removed the wonderful but unnecessary and out of place water feature from their front room to make space for a brand new sofa, rug and widescreen TV.

Therein lies Tottenham’s problem. The suggestion that this is their Coutinho moment is idealistic. Liverpool capitalised on a desperation from both the player and the buying club to encourage the sort of recklessness one tends to only see in the January window to maximise their profits. It also supplemented their budget instead of defining it.

But he was also a player Liverpool did not really need. Eriksen, for all his foibles and limits, is crucial to the way Tottenham play.

A lack of foresight, pre-planning and dumb luck means they must either settle for considerably less than a nine-figure sum or face losing Eriksen for free next summer. He penned a four-year deal in September 2016, while Coutinho had signed a five-year contract with no release clause in January 2017. Liverpool held all the cards then; everyone knows Tottenham are bluffing now.

Eriksen is the most-used player of Pochettino’s entire managerial career. His 241 appearances under the Argentine outrank even Kane (227), Hugo Lloris (220), Eric Dier (209) and Jan Vertonghen (204). No other players have featured more than 200 times under him.

As if the weight of getting their first signings in 18 months right was not enough of a burden, Tottenham might have to replace their most influential player while continuing to improve elsewhere. The alternative is to keep someone who no longer wants to be there.

Yet there is a sense that Eriksen has reached his ceiling under Pochettino, that all parties would benefit from a clean break and a new challenge. The Dane joined as part of the Magnificent Seven signed to replace Gareth Bale; it would complete the circle for him to leave an inheritance behind for Tottenham to rebuild again.

To see him toiling in the Madrid heat, head down, chasing shadows and pointing fingers, was to see a player who has already given his all to the cause. But while selling Coutinho was like changing hairstyles for Liverpool, replacing Eriksen will be as delicate and dangerous as a heart transplant for Tottenham.