Home Mailbox Eriksen to Liverpool would suit everyone (but Spurs)… 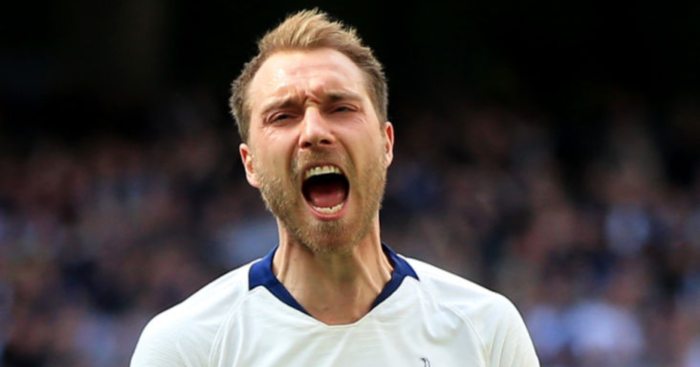 Thank you for your mails. Now watch some more Champions League and mail us at theeditor@football365.com

The boy’s a bit special
RE: Storey’s love letter to Eriksen.

Eriksen to Liverpool please…
I know it is rumoured that he wants to go to Real, and I know in January he will have is pick of the continent’s biggest clubs, and yes, I am aware of this newfound (internet?) rivalry between the two clubs and it might be sacreligious for him to cross that divide, but I think it will be beneficial to all of those involved, except Spurs of course.

I think he would be the perfect left-sided midfielder in Klopps system, a better Coutinho if you will. We know – as Daniel’s piece highlighted brilliantly – he is a hard worker off the ball and has adapted very well to Poch’s hard demands and stayed fit, without losing his creative touch. He would fit into Klopp’s high pressing and fast-tempo game, given his Spurs background. Additionally, and most importantly, would be his creative element. Allowed to push forward because of Fabinho, and with the excellent movement of Firmino ahead, he would be able to create chances all day for Salah and Mane to finish, or to score a fair few himself. Granted, Klopp likes to use creative fullbacks, but that has been a rather excellent cover for a lack of creative penetration in the middle. And Eriksen would fill that void oh so perfectly.

Apart from the aforementioned reasons at the start, the main hiccup I see is that Klopp might leave after his contract in 2022. The main draw for Eriksen to join Liverpool in my opinion is Klopp, and that system, and together, they will dominate football. So what he should do, is sign a two-year contract, get his Premier League and Champions Leage medals, become a free agent again at 30, move to Real Madrid and continue his journey at becoming the best midfielder in the world, ala Luka Modric.
Néill, (just a pipe dream), Ireland

Praise for Sancho
Watching last night’s game of Dortmund vs Barcelona and seeing Jadon Sancho hurdling a desperate challenge from Griezmann, keeping his balance and puffing his cheeks out to take a deep intake of breath before powering on down the wing was football poetry.

On the penalty shenanigans
I had a proper little giggle at Man United’s penalty shenanigans a couple of weeks ago. Now Rashford has converted one in a 1-0 win, while Barkley, Willian, and Jorginho argue about one before missing it in the last few minutes for a 1-0 loss. At home. In the Champions League. Humble pie has been well and truly served, and it’s quite sickly.

Lampard has come forward and said that Barkley is the taker when he’s on the pitch, although it kinda seems he’s said that to protect his players. Whoever the taker is, it was a shambles and distracts whoever is taking it from putting it in the back of the net. Jorginho in particular, after it was clear that Barkley wasn’t backing down, walked away in a huff only to return and give him a handshake. Rather than encouraging, it almost seemed sly, as if he was trying to psyche him out. Just let the man take it!

Anyway, hopefully that’s out of their system now. A disappointing result, needlessly making an already difficult group more difficult, as it’s very difficult to lose a home game in the group and still qualify.
Juanito

Blaming only Barkley
Baz, Dublin, no, the entire squad and staff do not need to take the blame for Barkley missing the penalty. Not even slightly. I will take no argument that it is in anyway acceptable for a professional, ridiculously well paid footballer (regardless of position) to miss the f*cking target from 12 yards, with no one around him to put any pressure on what side to aim, how hard to hit it etc etc! Its not beyond a joke. I’m sure some uber geek will be able to provide the statistics on penalties missed V those saved/scored etc and do some detailed analysis on it, but the bottom line is still the utter fact that if you cannot hit the sodding target from 12 yards and therefore have a chance of scoring then you shouldn’t be collecting your wage, its embarrassing.

If the ‘keeper saves it or gets a ‘lucky’ leg/arse/head whatever on it and keeps it out then fair one, unlucky, but missing the whole sodding target? One person to blame and one person only.
IK78

Coquelin red? It was barely a foul…
Genuine question, what do people think of the Coquelin tackle on Mount last night? I must admit that watching the game I thought that it was barely a foul. Coquelin passes the ball and the motion of the foot catches Mount really nastily but it wasn’t a tackle in the first place. The lack of any appeal from the Chelsea players was quite instructive in relation to this.

I then went onto twitter and read a heap of journalists saying how lucky Coquelin was to stay on the pitch. I can see their point, studs into an ankle would normally be a red but this was clearly accidental. I don’t think if someone tried to block a shot and took a kick to the stomach from a follow through they would be baying for the blood of the shot taker.

Maybe it’s because Mount is currently flavour of the month but I thought the reaction was over the top. Am I the only one who thinks that Coquelin was unlucky for this to be called a foul?
Cathal, AFC

Defending Salzburg
Some quick thoughts about RB Salzburg. I’ve seen a few people in the mailbox imply and the tediously ill-informed BT Sports pundit outrightly declare that RB Salzburg and Genk would be the whipping boys of Liverpool and Napoli in the group. This hot take could not be more wrong. While Genk, as can be seen from last night’s game, are absolute Scottish Premier League garbage, RB Salzburg are a very competitive team. This team has recently reached the semi finals of the Europa League and similar to Liverpool is expertly managed from the boardroom down to the playing field. FiveThirtyEight, who develop data driven sports prediction models, actually rate them as a better team than Napoli and Atletico Madrid in their global soccer rankings (I strongly recommend people to give it a google). While last night isn’t a total disaster for Liverpool it is certainly a big set back and they are in for a tough fight to get out of this group.
Oliver, London

Can we measure the pace of a game?
As a lifelong and very analytical Liverpool fan, I am broadly pleased with the rise in level of analysis that has occurred in the pub where I watch the games. After last night, I have a question I suspect some mailbox stattos can answer.

In the pub last night everyone was moaning that we (Liverpool) were looking slow. This also happens whenever we play Tottenham or certain other teams. I however didn’t think we look slow. I think all that’s happening is the opposition were defending against us better than our average opponent. This was certainly true given Napoli’s excellent pressing.

So in this modern world of football statistics for everything, are there any measures for the “pace of a game” or “pace a team is playing at” during each game? If so, does Liverpool’s pace differ depending on who we are playing, rather than a random assumption that somehow ‘we are tired/sluggish/slow’?
Hamish (Spread Eagle), London