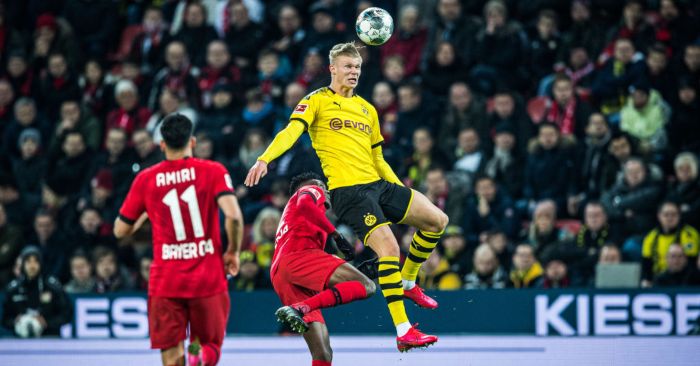 What’s the best kind of header?

One which involves a vending machine of a forward crashing through the box, butting the ball past the goalkeeper and scattering defenders like bowling pins.

But how many players could do that now? The targetman position still exists, but snobbery has forced it to live out of sight. At the very top of the game, in the highest divisions, playing a monolithic battering-ram is seen as an admission of weakness and an act of desperation. It’s the age of finesse and playing with force is considered ugly and crude.

Erling Haaland is blurring those lines. The Norwegian is no modern day Steve Anthrobus or Paul Moody, but he represents a change to the current trend. He’s forceful and direct in a way that a lot of forwards aren’t, and his ungainly, awkward power has an unusual kind of disrupting effect on games.

He has other attributes, too. His movement is smart and his combination play is sharper than he’s given credit for, but he has an intimidation factor. The way he moves clearly unsettles defenders and that compensates for whatever technical deficiencies he does have. When he recovers from injury and he’s back in the Borussia Dortmund side, just watch him run. Alternatively, look at the opposition players around him when he does and notice how often they just seem overwhelmed.

Maybe that provides an indication of where the game might be headed; perhaps forceful centre-forward play is due back in fashion. It should be, because as the physical shape of defenders has changed, a vulnerability has appeared.

Twenty-five years ago, centre-halves looked like Steve Bruce. Fifteen years ago it was Jorge Costa. Today, the game’s idea of a commanding presence is Virgil van Dijk and its cliche of a hardman is Sergio Ramos. Clearly something has changed.

Van Dijk may be an outstanding player, but his presence on the pitch is defined by different abilities to those of his predecessors. He’s elegant rather brutish and his composure on the ball and perfect timing in the tackle create only a veneer of physicality. He’s intimidating in a more ethereal sense, rather than in the traditional, kick-you-in-the-balls, step-on-your-neck way. It’s not to pretend that every defender prior to 1992 was a thug, because that would be absurd, more just that they used to come with the ability to cope with the more agricultural side of the game. Kenny Burns could play, but he could also kick a forward to pieces.

Which actually isn’t a criticism of someone like Van Dijk. He’s just the genetic reflection of what the game has deemed important. Whether it’s feeding the ball into midfield, arrowing passes to the touchline, or being able to read danger, he is a product of his position’s new priorities and the best in the world at the areas of the game which have been emphasised.

Eventually, though, there will be a response to that. The further along that evolutionary path defenders go, the more effective – in theory – physical centre-forward play should become and the greater reward there might be for teams capable of playing more ruggedly. Not Route One, exactly, or some Pulisian nightmare, but a contemporary variant which borrows a few key themes.

More pragmatically, though, a bigger, more powerful forward might be desirable as a way of neutering opponents’ strengths. The rise of the high press has created an appeal in being able to play long and direct passes out of defence. Not aimlessly and in a way that just surrenders possession, but towards a player who can actually secure the ball and then create an attacking phase.

What a utility that would be. Haaland is admittedly not that type – he’s hardly an offensive outpost for Borussia Dortmund – but his success is still indicative of such a future. Technique will always be a commodity in attacking players, as will movement, awareness, and the ability to actually finish, but doesn’t the ideal compromise – the perfect, affordable hybrid for today’s game – look a lot more like him, and less like, for instance, Leo Messi, Roberto Firmino, or Sergio Aguero?

That feels like a default which exists in spite of the natural order. The range of options with a physically thicker, heavier centre-forward increases, not just in terms of what that individual could do, but also what could be assembled around him and how he could be used as part of the team structure. On the basis of what he’d be facing and how detached defenders have become from their moorings, that player and his team could hold a fantastic advantage.

It takes time, though. Time to borrow the best bits from an Ibrahimovic, a Lukaku, a Lewandowski and now a Haaland, and then to construct a new ideal. It requires attitudes to change at grassroots levels and in academies. It requires a reversion to the belief in blunt force trauma and an abandonment of the prejudices around body shape and awkward mechanics. And it has to happen at a time when, invariably, the ‘right’ way to play the game is always to paint the prettiest picture.

But someone like Haaland could be a catalyst. When someone unusual has an effect on a sport, curiosity usually follows. Maybe, then, in some state-of-the-art academy hidden deep within a thick Bavarian forest, there’s a group of scientists gathered around a poster of Christian Vieri, wondering how to reinvent him for the modern age and capitalise on those imbalanced defensive ratios.

It wouldn’t be a bad idea.