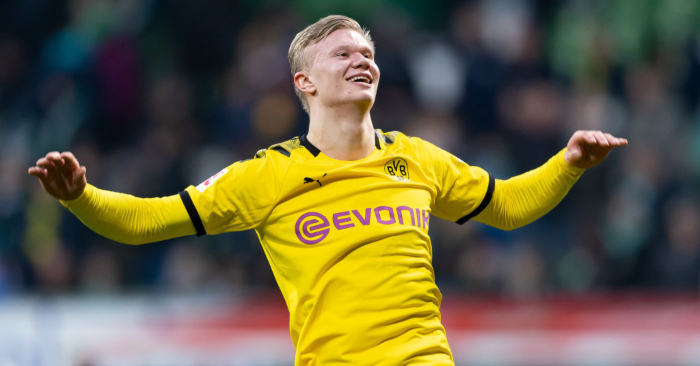 There was a standout moment of football last week. Much has already been written and talked about the second goal Erling Haaland scored for Dortmund against PSG and that special, unique and thrilling thracking sound of the ball hitting the net. It featured on podcasts, radio broadcasts and on TV. People have even uploaded it as a ringtone. It really struck a chord. It made so many of us turn to each other, grin and nod.

Why would that be? Why did so many of us purr so deep and rich at such a sonic surprise?

Haaland is in a moment of goalscoring legend: an almost mythic, unworldly figure who looks like he could be an alien that hasn’t quite got his human right yet. That certainly added a frisson of special otherness, but as he arrowed the finish, it was that specific sound of ball against net that was profoundly transportive.

In the same way a smell can powerfully send you back down the vista of years to childhood and once again you are 11 years old, that rasp and rattle was like opening a portal into a lost world, a connection back to what football is really all about; the place our love of the game came from. But today it is a sound drowned out by the dehumanising white noise of VAR, of the tribal bile, of say-something-anything-media, of the legal challenges, the bending of rules, the big wages, big fees, billionaire owners and bloody broadcast rights.

In a week where football seemed to be about everything but football, Haaland delivered the purest essence of our passion.

Modern football, at least towards its snowier peaks, has a curtain around it, a heavy insulating covering that has nothing to do with love of football and a lot to do with love of money. It isn’t nostalgia to say it didn’t used to be like this; it’s a straight up fact. And that loss is what we were, in the clatter of ball hitting net, all too painfully aware of. This wasn’t nostalgia for the way we were, it was a statement of what is important now, of what has always been important, of the timeless pleasures that made football so popular.

It is all too easy to think things were better in the old days, whether that is in 1950, 1990 or, if you’re 18, 2017. It’s an illusion. Memories may be beautiful but what’s too painful to remember, we simply choose to forget. We’ve seen recently how politically the warm glow of nostalgia can warp some minds into believing all sorts of lies, half-truths and outright inventions. Nostalgia mimics its better informed relation, knowledge, and in doing so makes us think that we know the truth. But we don’t, it is merely masquerading as the truth. And that’s a very different animal indeed.

So, no, there is no future in living in the past, but we can always be profoundly informed by it. Haaland’s goal reminded us of that. It was a shaft of light in a dark week, showing us the way forward. Saying this, this is what matters, this is what is important and not that which is sold to us as important, as great, as worthy of our passion or money, as having status, as elite. No. None of that. Just this.

Like most kids, I got into football at a young age and loved everything about the game. Volleys, half-volleys, dribbles, diagonals passes, big bloody hoofs downfield from the goalie, air shots, crunching tackles, the pitch, the shape of stanchion, the nets, the ball, the whitewashed lines, the shirts, shorts, socks and boots. Everything. Just any football, played anywhere, by anyone – it didn’t matter who, what or where. Even now, that uptick of excitement in the pit of your stomach when unexpectedly coming across two teams playing on a field or recreation park is a feeling all true football fans have, even in these weird days when some claim they will not soil their eyes with football played by anyone who is not an elite player, bought for an elite fee.

As you pass by, eyes always on the action, if with a disinterested partner or pal, you say “we’ll just watch for a few minutes,” but soon get into it and always hang around until it’s over, trying to get a feel for which was the better side, often without even knowing the score.

That’s what the true, endless love of football is all about. Not how big your transfer budget is. Not Big Money. Not all the politics and the power games.

Now, just as when I was a boy, passing a ground, big or small, floodlights bookmarking it in the landscape, makes the nostrils flare. Which club plays there, then? What is the ground called? What history does it hold? What is the record attendance? And more and more. All these questions flash into the brain as part of the joy of footballs shared history and romance. These are the ties that bind and Haaland’s ball on net sound was that of simple lifelong love. To the shallow, it has no meaning beyond adding one to the total, but to the cognoscenti it is a fundamental ingredient in football’s nourishing soup.

And when we fell in love with it, then as now, the quality of football was always largely irrelevant. All that mattered was – and all that still matters still is – just that it is football. Period. Trying to dress it up as show business has always been simply wrong, wide of the mark and a misunderstanding of the nature of our passion. There’s so much that is phoney today, so much output from so many who don’t understand why football is our life’s long love, but Haaland’s strike cut through all of that. That’s why we looked at each other, grinned and nodded. Yeah. That’s Our Thing. You and me.

There’s a compulsion to Association Football, to that most Victorian of words, soccer, that gets under your skin like a tick and no matter how much you scratch it, you always need to scratch it some more. And the scratching feels so, so good.

But in 2020 there is so much deflecting us, holding us at arm’s length. That’s why the Haaland strike was important. It made us feel timelessness in an era of transitory shallowness.

And it connected so profoundly because in some way, either literally or psychologically, that innocence and simplicity that has taken us all from child to adult, is what we have all lost, or what has, at the very least, been diminished. It echoed back to the days, not so long ago really, when we were not obsessed with money, with wages, with transfers or fees or agents. Back to a time when there was no information overload to crowd the brain. We loved football, talked about it all the time, we read about it in papers and magazines, we played it and went to watch it at all levels, sometimes even on TV. And this is the crucial bit: we then got on with the rest of our lives without wearing football like a two-sizes-too-small balaclava every waking hour of every day. That gave us perspective and space, two commodities that are so hard to find in 2020.

Can it be that it was all so simple then? Or has time rewritten every line? If we had the chance to do it all again, tell me, would we? Could we?

Nah. In the same way that no matter how much sex you have, you’ll never get your virginity back, no matter how much reflection on the past we make, we can’t go back there. In a linear space-time continuum, forward is always and inevitably the only way ahead.

So let’s create a future which makes football serve that and that alone. It is the repository of our love. It is what made football so big and popular. It’s what people without our love and understanding have grown rich off the back of, and it is that, and only that, which will remain when modern football’s huge, inflated, hot air Hindenburg of cash has fallen from the sky, crashed and burned in a conflagration of hyper capitalism and heinous greed.