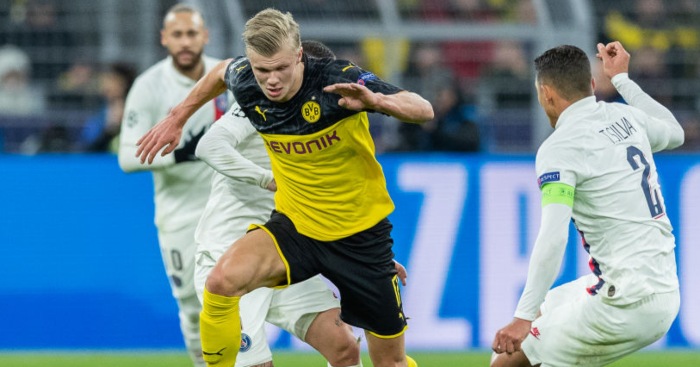 Erling Haaland moves in such an unusual way. His legs and arms flail about and his body tilts slightly forward. He looks like someone running down a hill, caught at the point right before they lose their feet and tumble all the way to the bottom.

Watching Haaland score goals is a spectacle, though. His first on Tuesday night was little more than a smart prod, but his second was everything anyone wants to see on a Champions League night in Dortmund. A slick, flowing move and a finish of absolute violence, rammed into the top corner, rattling the net with that familiar Westfalenstadion clunk.

That goal had everything. Not as a piece of play, but as a sensory experience: the look, the sound. A full house; it was completely satisfying and it remains so, no matter how many times you watch it.

The strike
The noise
The celebration

Watch 360° highlights and instant replays of EVERY goal on the BT Sport app 📲pic.twitter.com/RQAG5RzKGV

What a contrast to what Dortmund were facing. Paris Saint-Germain are such an emotionally vacant football team. That’s not a dig at their ownership or their existence, just an observation about the tone of their play. There’s no palpable desperation. Instead, when these decisive European games roll around, they exude this silent anxiety, as if they’re already seen the next day’s edition of L’Equipe.

Maybe it’s an illusion created by the way they’re coached – although nothing in Thomas Tuchel’s past suggests that should be the case – but all their structures seem to disintegrate and be replaced by dependencies on their various talismans. Whenever any sort of pressure is applied, whatever has been building throughout the season disintegrates.

By contrast, for 60, possibly 70 minutes of Tuesday night’s game, Dortmund were everything PSG aspire to be: slick and artistic, fluid and entertaining. The more chances they missed, the more they seemed to worry about what the consequences of that profligacy might be. That culminated in Neymar’s goal, but manifested most vividly in Dan-Axel Zagadou’s ludicrous attempt to stop Kylian Mbappe in the build-up. His airborne challenge could only have resulted in either a penalty or catastrophe; he looked like he was trying to kick a plastic bag in a hurricane.

But these are known weaknesses. Lucien Favre has an expressive defence, not a resilient one, and the occasional calamity is the trade-off for what they produce at the other end of the pitch. Jadon Sancho was superb. Goodness he’s talented. Axel Witsel was similarly excellent, reducing the visiting midfield to rubble and bringing out the petulant worst in Marco Verratti. When he came on, Giovanni Reyna brought all sorts of life with him.

Dortmund were compelling in how uninhibited they were. That’s expected of the older players – Witsel, Hummels, Can – because they’ve been around the block, but it’s interesting that one of the biggest nights of their season seemed to draw the very best out of their younger players too. Is it normal for a 17 year-old to come on a substitute and play as Reyna did? Demanding the ball and driving into space? It was a Champions League knock-out game and the whole world was watching.

That’s why Haaland is so captivating, too. He is relentless. Absolutely relentless. He has that quality that Raul used to have. His bad touches and missed chances don’t affect him. He just keeps coming back. Again and again, without carrying any minute-to-minute baggage.

But he’s also compelling because he shouldn’t actually be any good at football. His body is disproportionate and everything he does on a pitch looks slightly odd. Watch him lay a pass off, for instance. That’s a very strange technique. It’s overly deliberate. Clumsy, even. Nobody would teach someone to play football like that.

It’s a game of finesse now, and excellence is measured in a player’s ability to make the game look easy. Haaland doesn’t do that. There’s nothing slick about him. When he’s pressing a centre-half, the ground presumably shakes at that defender’s feet. When he runs with the ball, he doesn’t go past opponents, he skittles them, bowling ball style. He’s like a minor character from the Iliad, with that monstrous quality that makes him appear ever so slightly supernatural.

Does he even kick footballs? Not for his second goal, he didn’t. That was a punch, a thud, an act of savagery. Watch Keylor Navas’ response. Goalkeepers are described as helpless so often that it’s lost all meaning. But Navas was helpless in those seconds. When the ball bounced out of the net and neatly back to him, he still looked utterly bewildered. There weren’t even any recriminations in the PSG defence. Instead, they just looked broken. Like a collection of damaged houses in a rural town, after a tornado has blown through.

And that is Haaland. He is European football’s force of nature.