Home All The News Bridges ‘remain intact’ at Man Utd over €75m man; ‘Project No 7’ revealed 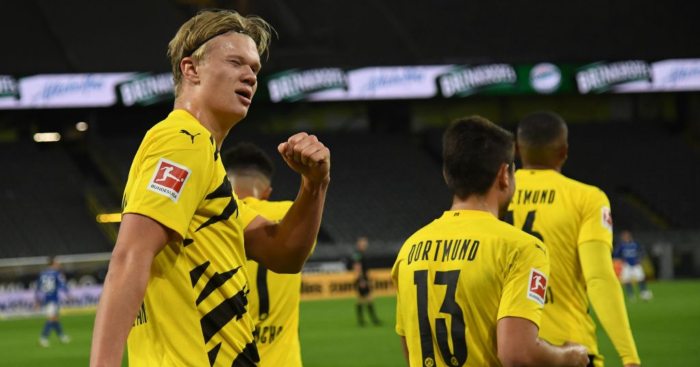 Man Utd and Ole Gunnar Solskjaer have kept their lines of communication with Erling Haaland “intact” for future transfer negotiations, according to reports.

Haaland swapped Red Bull Salzburg for Borussia Dortmund in January after blasting 28 goals in 22 games for the Austrian side.

The Bundesliga side paid Haaland’s release clause of €22.5m, while also handing the 19-year-old’s advisor, Mino Raiola a €10m payment, and then immediately slapped a release clause in his four-and-a-half-year deal.

The Norwegian has scored 23 goals in 26 appearances since Dortmund beat Man Utd to his signing, with the Red Devils not willing to insert a release clause.

However, The Athletic now claims that despite United’s negotiations with Raiola ending ‘fractiously’ the ‘bridges are said to remain intact between Solskjaer and the player’.

Solskjaer ‘wanted to bring him to Old Trafford at the earliest opportunity’ but Man Utd ‘refused to agree to the release clause demanded by Raiola’.

Dortmund will have to ‘allow Haaland to leave if there is a bid of €75 million (about £68 million) in the summer of 2022’ with Man Utd still understood to be keen on his signing.

Sources have told The Athletic that ‘an earlier move for Haaland could materialise at a higher price if it becomes clear the 20-year-old is ready to move.’

The report adds that ‘Solskjaer believes the Norway international will become Europe’s elite striker for the next decade, justifying the high price tag’.

A move for Jadon Sancho – who Man Utd failed to sign in the summer – ‘will also continue to be uppermost in Solskjaer’s mind’.

The Athletic continue by saying that ‘an informal codename among those trying to strike a deal for Borussia Dortmund forward Sancho was “Project No 7”.