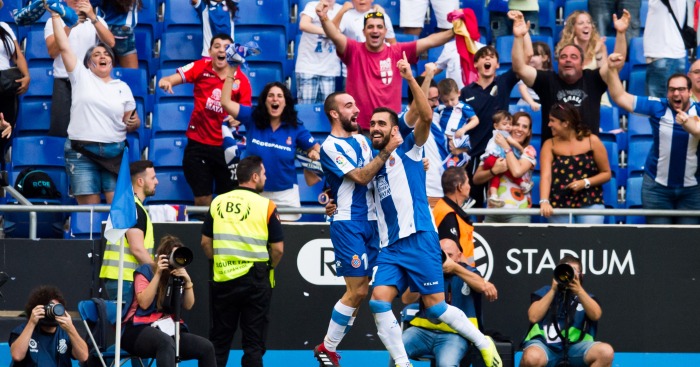 If I told you at the start of the season that come November, Barcelona would be top and Huesca would be bottom, you would imagine the league to be largely going to form. In actual fact, these are the only two positions where logic reigns.

In between the two, traditional backmarkers such as Alavés, Levante and Girona are occupying lofty positions in the top half, while typically more successful sides such as Villarreal, Athletic Club and Real Betis are languishing in the doldrums.

There are two names that stick out more than the others though, one at each end of the table.

In second place, just three points behinds their city rivals, are Espanyol, who were tipped by many for relegation at the start of the season.

Down in 15th, two points clear of the relegation zone, lie Valencia, who finished fourth last season and were expected to kick on having signed a host of excellent players in the summer.

Espanyol’s 1-0 win over Athletic on Monday night was their sixth league win of the season, after just 11 games. By contrast, they only won six of their first 25 matches last season.

Before the start of the season, many people, myself included, predicted a difficult campaign for the Catalan side. They sold a number of key players for a relative pittance, including top scorer Gerard Moreno and young stars Aarón Martín and Marc Navarro. It looked as though the owners were trying to get money into the club as a matter of urgency, with speed of payment prioritised over the amount received.

The only signing of any note was striker Borja Iglesias from Real Zaragoza, who faced the unenviable task of filling Moreno’s shoes despite only having played one top-flight game in his career.

On top of this, the choice of Rubi as new manager didn’t inspire much confidence. His past experiences at Levante and Sporting de Gijón suggested he was far better suited to managing in the Segunda than the top flight.

So far though, both Rubi and Iglesias have dramatically exceeded expectations.

Rubi’s tactics are bold, particularly for a side with limited talent and resources, but it cannot be denied that they are working so far.

Iglesias’ match-winning goal against Athletic on Monday night was his sixth of the season, and so far he has confounded the critics that said he would struggle to cope with the rigours of top-flight football.

His goals have directly contributed seven points to his side’s cause, and with Iglesias leading the line, Espanyol are flying.

Valencia, on the other hand, are not. Bizarrely, they have lost only two league games, the same number as Espanyol . The difference is that they have only won once, and have drawn a phenomenal eight of their 11 league games. To put that into context, they have already chalked up more draws than in the whole of last season.

Unlike Espanyol, Valencia were tipped for good things this season. They played some fantastic football as they powered to fourth place last term, benefiting greatly from the system employed by coach Marcelino, and from the club’s new-found stability on and off the pitch.

In the summer, they invested heavily in the transfer market, making the loans of Gonçalo Guedes and Geoffrey Kondogbia permanent and adding Michy Batshuayi, Daniel Wass, Kevin Gameiro, Jeison Murillo and Denis Cheryshev, amongst others, to their squad. To most observers, it appeared that an already strong side would get even stronger.

For some reason, it just doesn’t seem to be clicking this season. The style of play is broadly the same, but the ability to win games has gone out of the window.

It hasn’t been for the lack of trying, though. They have taken 160 shots so far this season, the fourth most in the league. Despite all the attempts, they have only managed seven league goals, fewer than every other team in the division. By way of comparison, they had scored 30 times at the same stage last season.

In Saturday’s defeat to Girona, they mustered 27 shots, and still failed to score. Girona scored with one of their five attempts, and won the game 1-0. This is a real problem for Valencia, and Marcelino doesn’t seem to know how to solve it.

“What else must we do to win that we did not do today?” asked the Asturian manager after the game, and he has a point. They are creating the chances, but cannot finish them off. He has plenty of striking options, none of whom seem to be able to hit the proverbial barn door at present. It appears that confidence is in short supply among the Valencia front line.

Perhaps it doesn’t help that he keeps chopping and changing the line-up all the time. If he picked his preferred front two and gave them a run in the side, maybe they would rediscover their confidence and their scoring touch.

Marcelino hasn’t come under much pressure yet, largely because of his success last season but also due to Valencia fans’ reluctance to return to the constant cycle of hiring and firing managers every few months.

Unless things improve soon, though, he could face calls for his head.

Valencia’s resurgence last season has brought with it greater expectation, which puts their poor start into sharper focus. The contrast with Espanyol is striking. Everyone thought they would struggle, but the freedom from the pressure to succeed has allowed the Catalan side to flourish.

It is likely that at some point, Espanyol will start to fall away, and Valencia will begin to find their rhythm, but at nearly a third of the way through the season, the effect of their respective starts is already profound.