Home All The News Ethan Ampadu, Chelsea and the importance of the intangibles 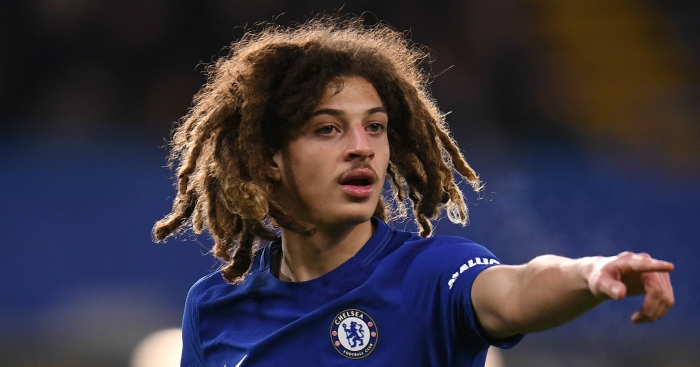 “He deserved to play this game and against Everton and against Huddersfield in the league,” said Antonio Conte in December. “Now he has to stay calm.”

Ethan Ampadu knows no other way. His rise has been stratospheric, yet still he remains grounded. He is, in the words of former manager Paul Tisdale, a 17-year-old who “plays like a 35-year-old”.

That is no insult, but a reflection of how Ampadu is as gifted mentally as he is physically. His intelligence and reading of the game belies his youth, and his ability to seamlessly switch between defensive midfield and centre-half is the sort of talent players develop in their 20s, not their teens.

In the 4-0 victory over Hull, he was deployed in the centre of defence, flanked by the more experienced Gary Cahill and a £33million defender in Antonio Rudiger. Yet it was Ampadu who was issuing orders to his teammates, marshalling the backline with consummate ease. On one occasion he implored his captain, Premier League and Champions League winner Cahill, to press higher up the pitch to squeeze out the attack.

If that implies a certain arrogance, a typical case of youth disrespecting his elders, the truth could not be more different. Ampadu simply revels in responsibility, and is as comfortable in the role of leader as he is follower.

There is a certain serenity to the Welshman’s game, a composed, relaxed air. He exudes calm when he would be forgiven for a bout of nervousness. For a 17-year-old not to panic when given such an opportunity is remarkable.

Which is not to say that his ability cannot be measured in simple statistics. No player made more tackles (4), clearances (4) or interceptions (3) against Hull, no player blocked more shots (1), and he did not commit a single foul. He completed each of his 30 passes, and has misplaced just seven of 179 in his last five games.

Dealt with everything that came his way. Some timely interventions to help keep a clean sheet. An unbelievably composed player. pic.twitter.com/81mt6ijLkh

Such a relaxed style does not come without its downfalls. Nouha Dicko skipped past him in the closing stages on Friday before forcing a save from Willy Caballero, and one pass put the keeper under immense pressure. But mistakes are to be expected with a player still in the early steps of his development.

Conte has been careful to manage his opportunities. Ampadu has played seven games this season, and Chelsea have won each of them. He was signed in July, made his debut in September, was handed his first start in October, became a full Wales international in November, and played his first Premier League game in December.

It is a shame that Exeter say there is a “massive disparity” in both clubs’ valuation of the player. Chelsea have done wonders for Ampadu, but his former club deserve adequate compensation after giving him his first taste of competitive football. Life in League Two was an invaluable experience, the foundation upon which Chelsea have built.

Ampadu’s fee will eventually be set at a tribunal, but in the meantime he is earning his manager’s trust with each appearance. “Show me young players who deserve to play regularly for Chelsea and I’m ready to pick them,” Conte said in August, but he was keen to point out that this was a two-way street. “But, I repeat, you must have the possibilities to do this. Not to invent them.”

Ampadu is taking each chance with characteristic poise and tranquility. As impressive as the perfect pass-completion rate and the well-timed tackles are, the intangibles set him apart.