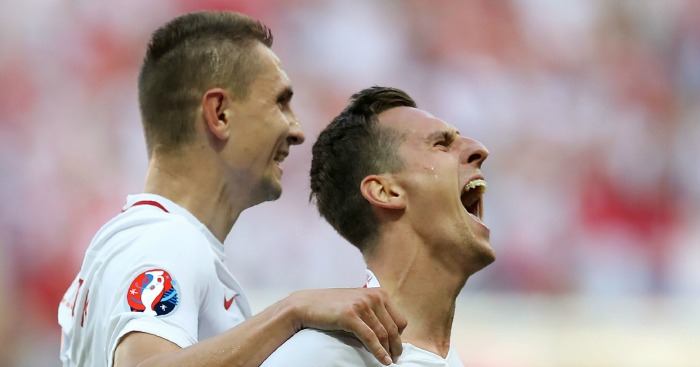 I haven’t watched Serie A since falling asleep on the sofa one afternoon in Gazzetta’s heyday of the early 2000s. I’ve made a gradual and entirely undeliberate mental Brexit from consuming European domestic football. Premier League fatigue kicks in for me at 6pm on Sunday evenings, leaving only the will for an occasional Clasico.

I haven’t played Football Manager since it was called Championship Manager and, sadly, my all-conquering 2022/23 Farnborough Town squad didn’t qualify for Euro 2016. I haven’t ripped open a Panini sticker since studiously scanning the Iran squad’s dates of birth before France ‘98. From there, sometime in the mid-2000s, I reached a point where I knew the players who could make an impact but didn’t care. Finally, in 2016, I know even less than before about the potential stars of a major tournament, but my mind is open.

Those who know everything about all the players at Euro 2016 (Daniel Storey) are like the GCSE students who actually stuck to a revision schedule and bought all the study guides (Daniel Storey). I’m here, having done some last-minute, panic-stricken cramming on the night before.

It’s okay not to know – and nobody should be ashamed for doing their research either – but the advantage of this incidental ignorance is that it allows me to recover the mystique of tournaments gone by (where Roger Milla came from seemingly nowhere to star at Italia ‘90, or Karel Poborsky slightly overrepresented himself at Euro ‘96 to earn a move to Manchester United) and start from scratch. It’s arguably more fun that way.

1) Arkadiusz Milik (Poland)
Club: Ajax
How ashamed should I be about not knowing about him? 6/10

One thing a striker will need in spades against Northern Ireland in this tournament is patience. Arkadiusz Milik had to endure 51 minutes of green-shirted blocks and lactose-intolerant puns about his name on Twitter before he finally broke the deadlock in Nice.

Milik – like his senior strike partner Robert Lewandowski – is a lean, sinewy presence up front for Poland, but arguably with more poise on the ball. That wasn’t immediately evident in their opening game, particularly in a first half in which he missed one cross completely and sliced another wide before his piece de resistance of dancing around the entire Northern Ireland defence only to thump a shot into the stanchion behind the goal. The widest of rueful grins suggested he was about to concede that this wasn’t his afternoon.

Milik was also taking Poland’s corners – apparently now the crime of Euro 2016 for any self-respecting forward player – but his chance in front of goal would eventually come shortly after half-time. Loitering on the edge of the box, stepping back from the green wall in front of him, Milik accepted Lukasz Piszczek’s pull-back with a velvet first touch. That turned a half-chance into a real chance and, despite the bodies of Craig Cathcart and Gareth McAuley hurtling towards him, his left foot this time made no mistake.

Beyond Euro 2016, and with Premier League eyes already drawn towards him, Milik has a significant and precarious step up to make. The 22-year-old’s career, like many others before, has found its groove in the benevolent confines of the Eredivisie – 32 goals in 52 matches is transfer gossip column form, at the very least. The successful past transitions of Ruud van Nistelrooy and Luis Suarez to a more testing European top flight has offset the rather less spectacular returns on investment from Afonso Alves and Mateja Kezman, and the scouts return undeterred to the Netherlands in search of ambitious, well-priced talent. Milik has more than one shop window in which to perform to secure a next-level move away from Amsterdam.

2) Artem Dzyuba (Russia)
Club: Zenit Saint Petersburg
How ashamed should I be about not knowing about him? 5/10

Included here on a technicality: Russia’s target man was by no means impressive against England, but he certainly made an impression. To call him an “old fashioned centre-forward” really doesn’t tell a rich enough story about Artem Dzyuba, the latest attempt by the largest country in the world to produce a goalscorer capable of turning heads at a major tournament.

Plenty of pre-Euros talk was dedicated to how England would deal with the most English of threats: the 6ft 5in battering ram of a striker. Chris Smalling dutifully responded that he relished the physical challenge (they always do) but remained mindful that Dzyuba still had dexterous feet for his size (they always do).

To Marseille, then, where the talking finally stopped and, by kick-off time, Englishmen had rather had their fill of tactical violence at the hands of Russian physical specimens. UEFA, charmingly, even listed Dzyuba by his full name on the official teamsheet.

Smalling’s 93-minute tussle with Dzyuba rarely threatened to become a torrid one, though: every time the TV director cut to the Russian, he either seemed to have a hopeful hand in the air to declare his availability for the next goal-kick or had wandered away from Smalling’s attentions to shove over the relatively Subbuteo-sized frames of Raheem Sterling or Danny Rose. These were the tell-tale signs of a well-marshalled, slightly frustrated and – ultimately – quite limited Big Man Up Top.

On closer inspection, there wasn’t much substance behind Dzyuba’s worrying numbers. Eight goals in qualifying? Seven of them came against Moldova and Liechtenstein. 23 goals for Zenit last season? His first 20-goal season in 13 attempts at senior level.

In mitigation, Russia’s battle cruiser had been deprived of its submarines, gunships and supply boats by injuries to Alan Dzagoev, Denis Glushakov and Dmitri Torbinski. After 92 minutes of fruitless toil, he at least proved a significant distraction as Russia’s two war veterans – Sergei Ignashevich and Vasili Berezutski – ventured forward from the rearguard, with the latter forcing home an undeserved equaliser.

Dzyuba may get another chance to make his presence felt against Slovakia in Lille, before another Premier League defender – Wales’ Ashley Williams – gets the chance to be his personal bouncer for an evening. Dzyuba comes across as a relic, but an intriguing one nonetheless.

3) Birkir Bjarnason (Iceland)
Club: FC Basel
How ashamed should I be about not knowing about him? 4/10

If one part of major tournaments is to make at least a continent-wide name for yourself, then it’s handy to have a name like Birkir Bjarnarson and have an Icelandic commentator present to shriek it into the night sky:

Has any footballer’s name sounded better than Birkir Bjarnarson’s does at that moment? There he is, scoring Iceland’s first ever goal at a major tournament – and not a hint of ‘overcelebration’ about it, Cristiano. Iceland are cool as f*ck.

In the circumstances, it was one of the most nerveless finishes you could imagine. Co-commentators like to talk of the “most difficult skill in football” – and never quite seem to agree on a hierarchy – but this was twice as tricky as Luka Modric’s straight-down-the-line effort against Turkey.

Also, Bjarnason’s was the sort of immaculate contribution that makes you realise that it isn’t simply ability that sets the elite players apart, it’s the consistency to produce that all the time. Maybe he’ll scuff his next attempt into the turf but, for that moment, he was more than equal to anything Ronaldo could produce in Saint-Etienne.

Compared to most of his teammates – who have meandered their way through Scandinavian and provincial English football – Bjarnason has already had a relatively exotic career path: taking in Norway, Belgium, Italy (and Sampdoria) and now in Switzerland with Basel. At international level, his goals have been scored in such illustrious surrounds as Tirana, Astana and the admittedly other-worldly Laugardalsvöllur in Reykjavik. The latest entry to that list – with an agonised, petulant Ronaldo as the backdrop – was the perfect scene for a breakthrough moment.