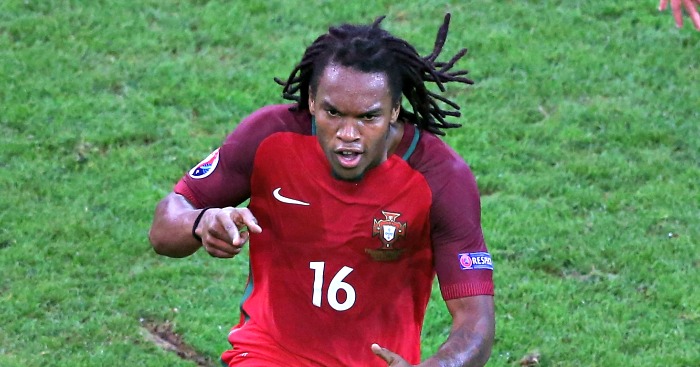 Fortunately, despite the dwindling pool of candidates still making names for themselves this summer, there are still lessons to be learned about players who previously only existed for me only in transfer gossip columns, YouTube compilations and other people’s Football Manager saves.

1) Renato Sanches
Club: Bayern Munich
How ashamed should I be about not knowing about him? 7/10

One handy threshold, for anybody worried that they might be losing track of just who the world’s elite footballers are any more, is the comprehensive Wikipedia list of the most expensive transfers of all time. It’s currently a heady mix of Ballon d’Or regulars, late-90s Serie A trophy signings, a whole starting lineup of Galacticos, and the odd Alex Teixeira to Jiangsu Suning for £40m to keep things interesting.

The latest gatecrasher to the list (depending on how you slice his heavily performance-based fee, which could eventually pile up to £65m) is Bayern Munich and Portugal’s adult’s-body-with-teenager’s-birth-certificate midfielder Renato Sanches.

The former Benfica ball of energy’s terrifying head-start in elite football ought not to be understated. From a first-team debut in November to becoming the youngest ever goalscorer in a European Championship knockout match in June, with a potential sixty-five million votes of confidence laid down by Bayern in between.

He began Euro 2016 on the bench, gathering immeasurable major-tournament experience in the way 18-year-olds are supposed to, but now heads into the semi-final against Wales with two straight man-of-the-match performances in the knockouts against Croatia and Poland and a comfortable place on the unofficial shortlist for the Young Player of the Tournament award.

In the unavoidable context of his tender age, the first impression that Sanches makes is a physical one – there’s a reassuring sturdiness about him – he’s built like a modest urban 4×4 – which provides the platform for his relentless box-to-boxery. But sheer running is nothing without some purpose to drive it, and his dagger of a surge towards the Polish defence in the quarter-final – followed by an ever-so-tidy one-two with Nani and a rifled left-foot shot into the corner to equalise – demonstrated that Sanches doesn’t do cul-de-sacs. A nerveless penalty as Portugal’s second-in-line in the shootout demanded a double-check of date of birth (which, incidentally, is now the subject of some fairly flimsy speculation back in his homeland).

A January debut in the transfer gossip columns was suspicion enough that Renato Sanches was close to the big time – Manchester United, Jose Mourinho and Jorge Mendes (the teenager’s agent, of course) may have got their heads together too late to prevent Bayern swooping with intent before the tournament. The terms of his transfer fee means he may have to pull up quite a few trees in the Bundesliga and beyond to ensure Benfica get the full windfall, but he looks like he will soon be at home among the De Bruynes and the Di Marias at the top of that Wikipedia list.

2) Hal Robson-Kanu
Club: Unattached
How ashamed should I be about not knowing about him? 9/10

An immediate confession, and one that tears at the very fabric of the Ignorant Scout premise: I had heard of Hal Robson-Kanu before Euro 2016.

I had possibly heard of him at least once on the Football League Show (or whatever Channel 5 are calling it now) as I pondered turning in for the night. I definitely heard a Dave Bracegirdle, a Tony Colliver or a John Gwynne on a Saturday afternoon, relaying to a half-listening Jeff Stelling that Robson-Kanu had gone close for Reading, who’ve made a bright start at Molineux, Jeff. I could have sworn he played for Fulham at some point, only for his Wikipedia page to confirm him as a hitherto one-club man. That is the full extent of my pre-Euros knowledge of Hal Robson-Kanu.

The west-London-born but now Welsh-as-the-day-is-long, falsest-of-false-nines, tireless Robson-Kanu is gleefully ticking off some plucky narrative boxes as Chris Coleman’s side swashbuckle through Euro 2016. After all, what feelgood personal story doesn’t begin with being rejected at 15 by Arsenal for being too small? Or, after finally finding a home with Reading, enduring nearly three years of knee-injury hell? Not to mention his wilful subscription to a fine major-tournament niche: running down his Reading contract to perform the best free-agent summer audition since a clubless Gary Breen almost signed for Inter after the 2002 World Cup. Damn that failed medical.

Wales fans were under no illusions about Robson-Kanu’s value to this finely-tuned Wales side. He’s the central distraction, the muscular irritant that leaves gaps for the nominally more talented Gareth Bale and Aaron Ramsey to exploit. But that wasn’t enough to force him into Coleman’s starting lineup back in the more innocent days of Group B, which only serves to enhance the latest chapters of his story. He came off the bench to tidily steal all three points against Slovakia, only to be subbed himself in the defeat to England and then miss out completely in the comprehensive wiping of the floor with Russia. Finally recalled to the team against Belgium, to ruffle the feathers of a makeshift defence, he produced his (re)defining moment.

His graceful elimination of three Belgian defenders in one inward twist of his left boot brought to mind a rather more famous penalty-area mugging-off by Ferenc Puskas at Wembley in 1953. Six decades later, though, Geoffrey Green’s “like a fire engine rushing to the wrong fire” simile had to make way for Robbie Savage’s equally evocative “one went for a cup of tea, one went for a coffee and one went for a pie”.

Once the dust settles from the hyperbole of Euro 2016 – whatever happens to Wales from here on in – there’s the next cliffhanger for Hal Robson-Kanu’s career: which club will judge him on his ultimate shop-window showing and give him another top-flight chance?

3) The entire Italy squad
Club: Various
How ashamed should I be about not knowing about them? 10/10

Much like, say, Radiohead, I have happily allowed Italian football to pass me by, despite knowing since the 1990s that it was fundamentally quite good – albeit often impenetrable, negative and arduous to consume – and that eventually I would have to give it a chance.

Barely an Anglo-Italian transfer goes by without the player being asked in an interview soon afterwards about the fundamental differences between Serie A and the Premier League. “It’s faster in England,” they say, “but much more tactical in Italy”. The word “tactical” has become something of a euphemism for the labouring spectacle of an inhibited football match – no more so than when Italy played Germany in the quarter-final in Bordeaux.

One man, though, presented a compelling case that cagey football does not always betray a lack of ideas and ambition. Antonio Conte spent most of the last 120 minutes in his job as Italy coach rooted to the edge of his technical area. Every photo of Conte finds him mid-way through a frantic directive to one or more of his Italian chess pieces, urging them into the shape he demands (and, generally, that’s up the field, right up in the opponents’ grill.)

Conte’s Italy began the match in such a ravenous manner that a German goal-kick in the fifth minute threatened to turn into a post-parody art installation. Manuel Neuer, used to stroking the ball out to the edge of his area to get things going, found every distribution route blockaded. Refusing to go long-haul, Neuer had to stick it out for what, in goal-kick terms at least, felt like an eternity.

Many of the Italian football stereotypes – deserved or otherwise – were being given a good stress-test. Giorgio Chiellini (who probably wouldn’t be anywhere near the national team if he was English, for reasons our confused footballing culture must try and iron out) added a healthy measure of nonsense to some textbook no-nonsense defending.

First, he chased Mario Gomez into the corner like a angry, hungry dog and won the ball (and a foul, of course) with an angle diving header/tackle hybrid that only a man who really, really wants that ball back could produce. A riveting sub-plot with Thomas Muller began with the exasperated German doing a crying-baby impression in Chiellini’s face after the defender won another foul in his own area to relieve the growing pressure. When Muller returned the favour with a theatrical fall later in the evening, Chiellini could only offer an appreciative nod and a shake of the hand, acknowledging that rough often comes with smooth for an Italian defender.

Elsewhere, and everywhere, Conte’s team was decorated with sheer balls. Eder ran himself into the ground like a man who perhaps knew this was a fortunate time for such a modestly-able striker to be near the Italian side. Andrea Barzagli burst into floods of tears – 40% despair but 60% pride – on Italian TV afterwards. Emanuele Giaccherini was a walking (or, rather, marauding) advert for being managed by Antonio Conte with Italy rather than Gustavo Poyet at Sunderland.

Leonardo Bonucci – essentially Chiellini’s better-looking little brother, but with more interest in the ball – stepped up for the first penalty of his career to drag the Italians level. It was an absurdly authoritative spot-kick – the anti-Southgate, if you will – that was terminally undermined by some shootout uncertainty later on.

Nevertheless, there was relentless feeling that what Conte could control from the touchline, he was giving 100% plus VAT. And then, when it finally slipped away in the psychological minefield of penalties, he took it like a colossus:

“I’m proud of these guys. They have proven to love the shirt, we gave everything: we leave without any regrets.”

This Italian squad – not a vintage one, but with the odd precious antique still lying around – made elite-level football look reassuringly difficult: defending, attacking, pressing, fouling (15 of the 23 were booked at some point, like a badge of honour), winning and, ultimately, losing. Not to mention managing.

What shape Conte will whip a semi-comatose Chelsea into next season doesn’t bear thinking about – the redundant Alexandre Pato and Radamel Falcao have made a well-advised exit to presumably less punishing pre-season training programmes – but, by the end of the 2016/17 season, Conte is likely to have found another twenty or so players suddenly willing to donate blood, sweat and tears for his tactical cause.