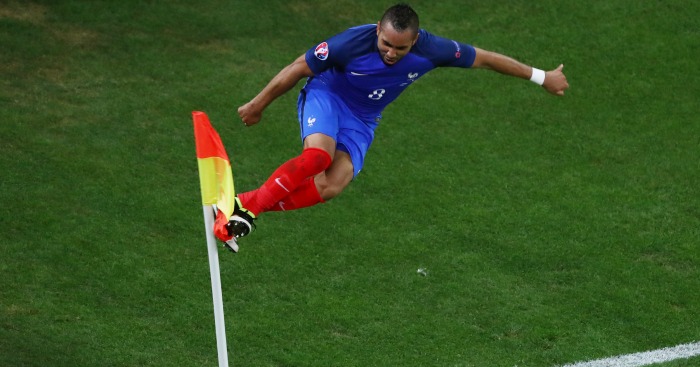 Why so interesting?
You might remember a little incident in Paris a few years ago, where the ball inadvertently struck Thierry Henry on the hand and caused Ireland to miss the 2010 World Cup. After the celebrations had died down after a famous victory over Italy, Irish thoughts turned to revenge. “I think Ireland have decided to forget about it,” was Martin O’Neill’s optimistic view on Thursday. We don’t believe that for one minute.

Thing to look out for?
The key to French success will be how their front three (likely to be Dimitri Payet, Antoine Griezmann and Olivier Giroud) can interchange. Didier Deschamps’ side have scored their goals late and typically through individual brilliance rather than flowing team moves. Rather than staying forward and waiting for crosses into the box, Giroud needs to drop deeper to let midfielders overlap. Rather than staying out wide, Griezmann must try and drift central and into the areas where he is so effective for Atletico Madrid. Would Deschamps consider pushing Griezmann central alongside Giroud, or even dropping the Arsenal striker and having Anthony Martial and Griezmann interchange positions in the forward line?

Which player to watch?
Dimitri Payet has been the French golden boy so far, but Paul Pogba’s dominant performance against Switzerland during which he twice hit the bar has given a nation hope that he will grow into this competition. Ireland’s biggest weakness is in defensive midfield, where James McCarthy’s inauspicious run of form continues. The thought of Pogba picking the ball up from deep and running at McCarthy is enough to make Irish supporters wince and the rest of us do a little post-coital sigh of pleasure.

What will happen?
France will win, I think. The game may follow the French formula of territory and possession without a goals, a problem that is rectified by one or two goals in the final quarter of the game. Without wanting to p*ss on Irish chips, you can’t overstate just how bad Italy were on Wednesday evening.

Why so interesting?
Well, a good way to judge England for a start. Having thwarted Roy Hodgson’s team in their final group game to ensure qualification for the knockout stages, don’t expect Slovakia to change that plan now. They will sit with six or seven men behind the ball at all times and try and force Germany into crossing the ball from deep and wide, exactly where Martin Skrtel is comfortable. Germany will look to succeed where England failed, and break the Slovakia resolve.

Thing to look out for?
How Joachim Low next tries to get the best out of Thomas Muller. For Germany’s first two games, Mario Gotze operated as a false nine but was wholly incapable of bringing others into play and largely toothless in the penalty area. Muller did manage to see more of the ball in dangerous areas with Mario Gomez starting (and hit the woodwork twice), but some in Germany would still like to see him in a more central area. Muller has still to score at any European Championship, which is a bit silly.

Which player to watch?
Mesut Ozil. Man of the match against Northern Ireland and with a glorious assist for Bastian Schweinsteiger’s goal against Ukraine, Ozil’s creativity and vision is surely the key to unlocking Slovakia’s defence. The one thing England missed in the group stage was a touch player on the edge of the area, creating time and space with fleet of foot and thought. Ozil is that magician.

What will happen?
This game reminds me of Germany vs Algeria in the 2014 World Cup, where Germany struggled to get going and were eventually taken to extra-time. I think they will keep Slovakia at arm’s length, but win only by a single goal. Then they’ll need to get going against Spain or Italy. So there.

Why so interesting?
The (understandable) assumption is that Belgium have been thrown into the air by the Italians, but promptly landed back on two feet. Marc Wilmots has still not impressed as a coach, yet Belgium are two games away from a semi-final and have the gentlest draw of all the pre-tournament favourites. Yet Hungary won their group, scored three times against Portugal and have been the surprise team in the tournament. Bernd Storck will be happy for his side to fly under the radar again.

Thing to look out for?
The injury to Mousa Dembele means that Radja Nainggolan and Axel Witsel are certain starters in central midfield, but there are still questions about the three attacking midfielders in behind Romelu Lukaku. The most likely scenario is Kevin de Bruyne as a No. 10 flanked by Carrasco and Eden Hazard, but the Chelsea winger hasn’t yet set the tournament alight. Is Wilmots tempted to play De Bruyne wide and Hazard in an Ozil-style role behind the main striker?

Which player to watch?
Other than Gabor Kiraly’s inner thighs after another combination of heat and tracksuit bottoms, it can only be De Bruyne. One of the Daily Mirror’s writers put him in their team of the tournament so far based purely on his performance against Ireland, and that’s kind of where De Bruyne is at right now. If he performs at his best, Belgium will surely be too strong. Play as he did against Italy, losing the ball high up the pitch, and Hungary’s counter-attacking will cause Wilmots’ side problems.

What will happen?
“Sooner or later we will get the reward for our play,” Roy Hodgson said after England’s draw with Slovakia. “Someone might find themselves on the end of a tough result. Soon we will make someone pay.” That’s exactly what I think about Belgium, who showed against Ireland that they have the potential to give some a right ol’ d*cking. Will that be Hungary, though? Hmmm.