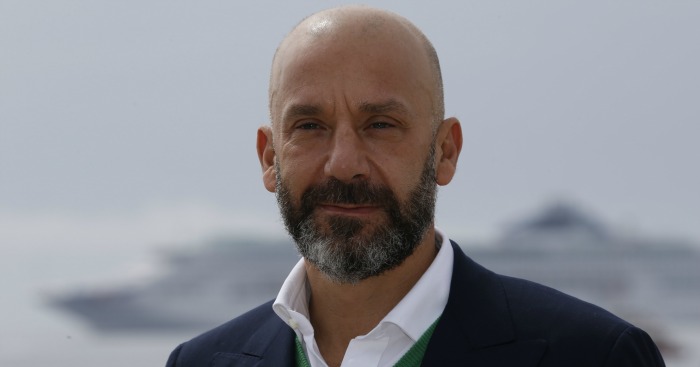 Johnny’s been watching and listening to a lot football. Here, in a revised version of the usual FOTT column, he looks at the first week of the Euros on our tellies and radios…

Fashion police
The most stylish man in any room is always the Italian. This is a law of nature. Being born Italian is a blessing which allows you to wear anything and look cool, but also look like you’ve not tried for a second to be cool, and that just makes you look even more cool.

Luca Vialli turned up for the Belgium v Italy game in jacket ‘n’ jeans with open-neck shirt. On an Englishman this would have had all the style and cool of a corporate middle-manager on his weekend off at a carvery, but somehow on Luca it looked relaxed and stylish. Luca exists on a higher plain. Even when just sitting in a chair the air seems to move around him in a more relaxed fashion.

Rio’s collars are always buttoned up, as though his mam has told him to make sure he doesn’t catch a chill. Aw.

Ian Wright was wearing something in brown which looked styled on a hospital gown. Yay!

The robustly upholstered Chris Waddle when interviewed by Gabby Logan, squinting into the sun, was wearing an ill-fitting white polo shirt, looking like everyone’s dad on holiday. That was a lovely Everyman moment.

That Gary Lineker looks nice too, doesn’t he?

Lingo bingo
The most rewarding listen this week was easily Jens Lehmann. He’s fantastic. Has a slightly whispered sibilance which gives his words an air a menacing genius. Almost perfect English but delivered with an air of attractive Germanic superiority. Talked well about how England produces talented players but not intelligent players. “You must always be thinking, even on the pitch,” said before adding “for you, the war is over”. No he didn’t. But not hard to imagine he would, given half the chance. Like the Waddler, he’s quick to criticise his own team, almost offended when they perform poorly. His co-comm on the Germany v Poland game, with Conor McNamara, was a wonderful thing, full of dry humour and sly wit. Sometimes it sounds like he is the Jens Bot 2.0.

At one point, as Poland took a free-kick, Jens said “I do not expect a good delivery”…it was a terrible free-kick, After being complimented for his insight by Conor, Jens simply said, “It just seemed to me that was very likely to happen.” Then, before a free-kick for Germany, Jens said, with almost robotic understatement, “I hope this will be successfully converted.” Wonderful.

Was also critical of Manuel Neuer in their first game, saying he gets caught out of position a lot and has to compensate for this with acrobatic saves. Not sure you’d find ex-England keepers saying anything other than the fact that Joe Hart is “world class”. He also brought some sort of Austrian pastry into the commentary box, in a TMS style. What a man.

Someone who’d have liked to eat that sweet pastry is Alan Green, who has developed a habit of saying “goodness gracious” when something surprising happens, in lieu of actually describing what has happened. Stop it, Alan. Mind, I enjoyed his “Does Hodgson know what he’s doing?” comment at half-time in the Wales game. He’s a cynical, grumpy sod, but we need that in an era of knee-bending to elites. Oh and he did know what he was doing.

Gerry Taggart doing co-comms on Northern Ireland games has been an exotic pleasure akin to having warm marbles pushed into your bum with a table tennis bat.

The Waddler, as ever, has been quick to eviscerate England, at one point saying we were playing too slow, only to say they were rushing it when they upped the tempo early in the second half. He’s wonderful though, is the Waddler. His comment about the fifth official not giving a pen was a minor classic: “He said no – but he was putting his coke and hot dog down at the time, like.”

In fact, all things Slaven have been fantastic. Full of humour, attitude and passion, as well as detailed understanding and knowledge, he’s been a huge hit.

Luca Vialli quoting Aristotle was another fine moment. All things Luca are a cause for celebration. He seems almost impossibly good-natured and yet has now brought a manager’s eye to proceedings. Even when he’s talking about defending it feels and sounds like he’s seducing you.

John Hartson crammed into a chair looking like a huge slice of Lorne sausage was a magnificent sight to behold.

Vincent Kompany has been a mellow flavour and was a lot of fun on the Italian game.

Rio talking about the difference between being the centre of a back three as opposed to one of a back four was excellent.

Thierry Henry on the radio turned out to be superb. Engaging and relaxed and yet much sharper in his observations than previously heard. When talking about whether England play with fear, his comment that “if you’re frightened you might as well stay at home” was more cutting than anything he does on Sky. Also good on the BBC telly. I wonder if TH is so much better because of greater excitement for the gig, or better, more inspiring direction and company.

Danny Baker’s tweet that ‘Glenn Hoddle is probably being paid about £25k plus expenses for the dull mumbling horse-shit’ was another stand-out moment. More of that please Dan. Who amongst us didn’t think…how much?!

Iain Dowie’s almost puppyish enthusiasm on co-comms, as he rattles out sentences at high speed, his mouth unable to keep up with his brain.

Hearing Andy Townsend and Clive back in the saddle like last season never happened was, if anything, almost too good, though that ‘justice’ comment was a strange moment. Not for me, Clive.

I saw the Czech Republic game on a screen, on cross-trainer in the gym, with subtitles. And even with subtitles it’s obvious when Mark Lawrenson is speaking, so distinct are his speech patterns and off-hand comic comments. Brilliant.

And, we radio listeners take it for granted but John Murray’s commentaries have been fantastic, full of shouty excitement and, because I listen to them while watching the TV, incredibly accurate descriptions of play. If you can be a genius at commentating, John is it.

When I asked on Twitter for hits and misses, almost to a woman and man, the common view was that Robbie Savage, Martin Keown and Glenn Hoddle have been the least interesting performers. It was commonly said that the presence of so many erudite, entertaining and intelligent pundits had really shown up those who are not up to that par, and that these three have been guilty of being, not bad but perhaps a little unexceptional. This tournament coverage is so good that standard looks very Poundstretcher.

Proper Football Men
The PFMs have largely been ousted by foreigns and them clever sorts what know how to say them words and that.

Deano is there though, still looking like a slightly younger version of Bruce Springsteen and wearing his distinctive, slightly dazed expression which makes you think some part of his face is numb.

Big Johnny Hartson has survived the cull and has filled a shirt bigger than a truck tarpaulin very well. Thank God for widescreen TV.

There’s Wrighty of course who has returned to his old wrigglin’ ”n gigglin’ modus operandi, and Norman Whiteside looks like the sort of man to whom Reidy’s flask of horse linament, blue curacao and thousand-year egg smoothie would not be an unwanted challenge.

This sort of environment isn’t the PFM’s home turf at all. It involves knowing about football outside of England, it means having to say foreign names, and it means all their out-dated assumptions about English football and European football are easily shown up as nonsense. Plus, there’s always the chance of putting off prospective chairmen with an ill judged joke based on national stereotypes, with a whiff of xenophobia about it. I never said them words, no disrespect, luv but tits is tits.

Of course, this is also why we’re all enjoying the coverage so much and the PFMs will be disappointed with that, Jeff.

Seriously, this has been a magnificent week and for fans of football, an almost ceaseless river of joy. Everyone working to bring it to us deserves trebles all round.