The biggest winners are those that didn't play. It really was that kind of week for England. 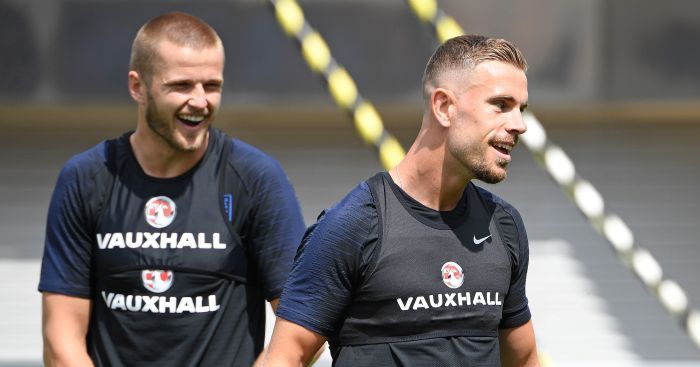 As ever, this represents our estimation of Gareth Southgate’s England thoughts. And we feel like we know him well. Numbers in brackets pertain to this ladder from all the way back in the Before Times of last November.

1 (1) Harry Kane
Pretty rubbish in both games with minimal service yet still had a valid goal chalked off in Reykjavik and came within inches of pinching a late winner in Copenhagen. After two games without a goal, though, his recent England record is now troublingly just 27 in 30 games since the start of the 2018 World Cup. Those numbers plus the fact that literally nobody else did the slightest thing to displace him means the United Kingdom’s least convincing F-bomber remains top of the pile.

2 (2) Raheem Sterling
Scored an England goal this week which literally nobody else can say. Was the liveliest of England’s few attacking players which, in truth, says absolutely nothing about Sterling and a fair bit about everyone else.

3 (6) Jordan Henderson
There are two ways to boost your standing in a side: be in it when it’s performing well and outside it when it’s performing poorly. Henderson was a huge winner from this international break without kicking a ball. There’s little overtly flashy about what he does in the middle of the pitch, but England have nobody else who can do it and it really showed this week.

5 (5) Marcus Rashford
Too busy being a genuine hero and running the damn country to play a couple of trifling football matches this week. Still contributed about as much as any of England’s other attackers.

7 (9) Harry Winks
There are two ways to boost your standing in a side: be in it when it’s performing well and outside it when it’s performing poorly. Winks was a huge winner from this international break without kicking a ball. There’s little overtly flashy about what he does in the middle of the pitch, but England have nobody else who can do it and it really showed this week.

8 (8) Ben Chilwell
There are two ways t… yes, well, you get the idea with that. Suddenly feels unbelievably and troublingly important given the paucity of alternatives at left-back. Also potentially offers a ‘reverse Walker’ left-footed option on the left of three centre-backs if Southgate decides to use that formation again and if – admittedly this is an ‘if’ that’s doing a fair bit of lifting – another left wing-back makes themselves known over the coming months.

9 (7) Trent Alexander-Arnold
Obviously England’s best right-back but still yet to actually demonstrate as much when playing for England. The fear is that TAA is a ‘system player’ – a brilliant one, sure – and that England’s system is not that system.

10 (12) Joe Gomez
Mainly fine, but a high-profile rick against a team as limited as Iceland isn’t ideal even if he ultimately got away with it. Still remains Maguire’s likeliest partner in a back four and a certain starter in a back three.

11 (11) Nick Pope
Seems now to have his feet under the table as England’s number two. Just needs to break the cycle of great season, injury-ruined rubbish season, great season to ensure he remains there.

12 (10) John Stones
Watching Gomez and Eric Dier just about cope okay with mediocre opponents while also engaging in a private duel to see who could whack the greatest number of raking balls five yards over everyone’s head was tough for the soul but undeniably good for Stones.

13 (13) Jadon Sancho
Disappointing in both games, although all the forward players get some mitigation due to the service provided to them. A non-mover primarily due to that fact and also successfully managing not to breach the bio-secure bubble with a couple of Icelandic sorts.

14 (35) Eric Dier
‘We may never see him in an England shirt again,’ we said in November. “Eric Dier’s had two excellent games for us at centre-back,” said Southgate this week. Both these claims were false.

15 (18) Kieran Trippier
I’ve got sympathy for Trippier having spent the entirety of my own stellar playing ‘career’ as a right-footed left-back, first shoved there based on the batshit but curiously inarguable logic of “because you’re left-handed”. At least that’s what they told me. Looking back now, it was obviously actually because I was a) rubbish, but crucially also b) keen and fit enough to run up and down the flank all day, right up until the point at 16 years old when I was very suddenly neither. Anyway. Trippier as England left-back? Not for me, Clive. But Southgate is fiercely loyal to his heroes from Russia.

17 (28) Kyle Walker
Getting sent off was sub-optimal, but he started a competitive game for England which seemed as unlikely as anything else that 2020 has thrown at us when we last did one of these. The return of the back three – even if only as a Plan B – and TAA’s failure to truly convince in England colours also mean a resurgent Walker covers a couple of spots.

18 (17) Mason Mount
Yet to convince when handed a starting spot but has made a difference off the bench. Tuesday night offered something of a free hit given the hour of stodge that preceded his introduction, but England were undeniably far less sh*t in that last half-hour after he came on.

20 (36) Phil Foden
An England debut and a key if unwitting role in removing the gossamer-thin veneer that covered the rank hypocrisy and prejudice of The Sun’s Raheem Sterling coverage. A great week, then. In a way.

21 (22) Alex Oxlade-Chamberlain
He’s gone again. Assuming the knee injury picked up during pre-season isn’t too serious – and we really massively hope it isn’t – he should be back again.

22 (19) Tammy Abraham
There is one available spot in England’s squad for a striker who is not Harry Kane. Scoring five goals in 22 Premier League games since apparently securing that spot back in the heady joyful delirium of 2019 is unhelpful. Unlikely to get anything like as much game time at Chelsea this season; could plummet fast when the next ladder comes around.

23 (23) Dean Henderson
The man in shaky possession of the coveted third keeper gig but surely vulnerable if he isn’t in fact Manchester United’s number one, because…

24 (37) Aaron Ramsdale
Henderson’s replacement at Sheffield United now also has every chance of displacing him from the national squad.

25 (27) Jack Grealish
Finally played for England! Even if it was only for 15 minutes! Was quite good in those 15 minutes, though! Still don’t think Southgate is convinced!

26 (NE) Kalvin Phillips
Neither he nor Declan Rice were particularly helped by having the other alongside them in Copenhagen, but Phillips was demonstrably the superior of the two on the night as he made his England debut ahead of his Premier League bow.

27 (16) Declan Rice
A move to Chelsea to play alongside some good footballers may well help, but right now he’s done nothing but harm his case. Offered nothing to England going forwards or backwards against limited opponents and in Copenhagen was outplayed by a debutant who has yet to feature in the Premier League (see above).

28 (33) Michael Keane
In November we were giddy with excitement that Fikayo Tomori was in the squad ahead of Keane. That is no longer the case, which doesn’t feel like progress. They may well be club teammates this season if reports of a Tomori loan move north are to be believed, which could be interesting.

29 (49) James Ward-Prowse
A 20-spot rise just for shithousing the penalty spot? You better believe it.

30 (32) Dele Alli
Toothpaste philosopher and Mourinho project probably, like so many others, gets a small boost from not being involved in these two creativity-free displays. Still a square peg in any of England’s assorted round attacking holes.

31 (15) Ross Barkley
A career at yet another crossroads with chances at Chelsea likely to be harder than ever to come by given their summer recruitment and the very real prospect of a career not quite delivering what it ought have.

32 (NE) Eddie Nketiah
Getting games and goals for Arsenal now, and a quick-fire hat-trick for the Under-21s can’t hurt.

34 (21) Danny Rose
If he gets any kind of football anywhere, he’s still a chance. England really are desperately, desperately short of left-backs.

36 (29) Fikayo Tomori
A touted loan move to Everton would probably be useful, if only to prove once and for all he’s better than Michael Keane. Which he could really do with being.

37 (31) Aaron Wan-Bissaka
England have too many right-backs and not enough left-backs.

38 (NE) Conor Coady
It may have taken a Springfield Nuclear Power Station softball team string of misfortunes for one of the Premier League’s most consistent defenders to finally earn a call-up, but having got the chance absolutely did not let himself down. Probably the best of the approximately 427 defensive players Southgate deployed to deal with a worthy but far from terrifying Denmark side. And being a one-cap wonder is definitely better than being just behind Steve Bruce in lists of “Best players never to play for England”.

39 (43) Ryan Sessegnon
Left-footed. Heavily involved with Tottenham in pre-season and seemingly in Mourinho’s good books. Left-footed. If he’s left-footedly playing for Tottenham in the early weeks of the season, then the left-footed left-footer could well be there or thereabouts when the next internationals roll around. Is also left-footed, which helps his case.

40 (23) Tom Heaton
Old man Heaton can’t currently get in the Villa team ahead of older man Pepe Reina, which is a problem.