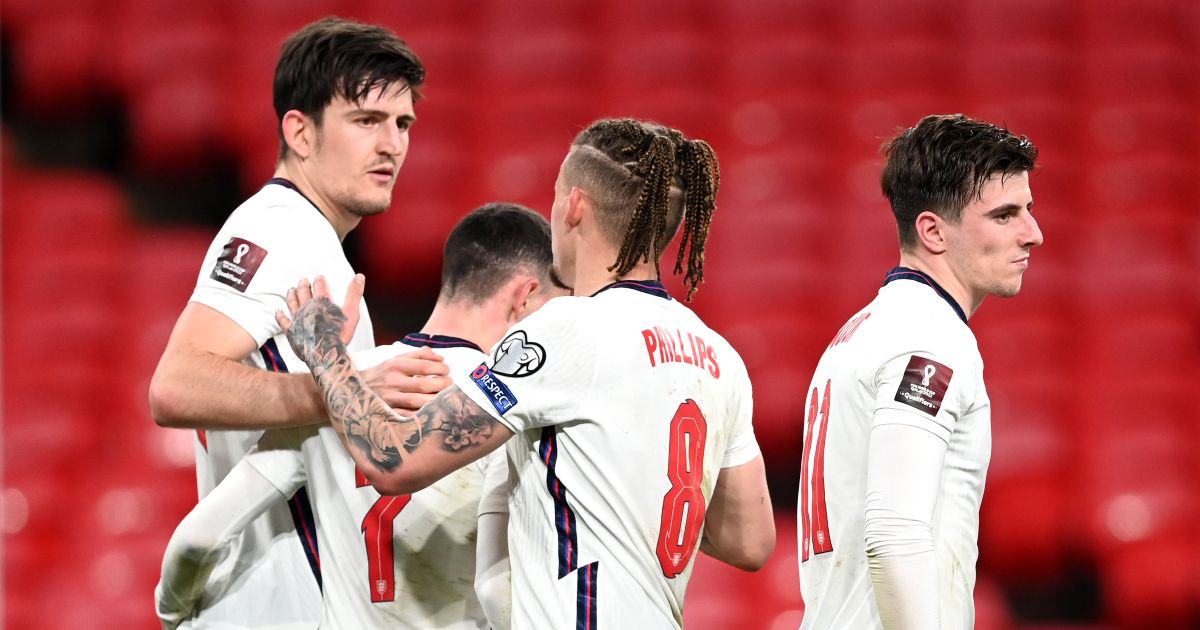 As ever, this represents our estimation of Gareth Southgate’s England thoughts. And we still feel like we know him well. Numbers in brackets pertain to this ladder from November. It’s been a while so things have changed.

1 (1) Harry Kane
Actually, some things almost never change. He ended that England drought with strikes against Albania and Poland after Gareth Southgate risked his wrath by forbidding him to shoot indiscriminately at San Marino. There is still a pretty huge gap to England’s next striking option. Obviously, he could be even better if he listened to Stan Collymore.

2 (3) Harry Maguire
So, so, so much better for both club and country as the season has progressed. If he is fit, he plays, and that is absolutely fine by us. Especially if he finishes like that.

3 (2) Raheem Sterling
We asked the question and Sterling answered that question against Poland. More than double the dribbles of any of his teammates over three games perfectly illustrates that he offers something nobody else does.

4 (6) Declan Rice
It no longer feels like inclusion by default. Rice is genuinely a very good defensive midfielder with an underrated eye for progressive play. And the excellent news is that he is only 22.

5 (5) Mason Mount
The link between midfield and attack that England have too often been missing. It just works with Mount. Created more chances over these three World Cup qualifiers than any other player. Don’t doubt him or you will have to answer to Roy Keane.

6 (4) Jordan Henderson
A shoo-in for the squad if he is fit, but he has watched on as England have coped pretty damned well without him. No prayer mats will be deployed.

7 (32) John Stones
Yes, there was a mistake. But he is and absolutely should be Gareth Southgate’s preferred partner for Maguire. He has been revitalised at Manchester City and that is truly one of the good news stories of the season.

8 (8) Jordan Pickford
Still England’s No. 1. Even if it’s only because he appears to have feet that work.

9 (11) Kyle Walker
His recovery pace makes him invaluable whether as a third centre-back or a right-back. Which reminds us that his versatility is pretty important too. All those right-backs and it’s still the man playing for the Premier League’s best team (by a mile) that emerges as the favourite. And this still surprises people. Weird.

10 (9) Ben Chilwell
Kept his place against Poland despite real and obvious pressure from Luke Shaw, which suggests that Southgate still sees him as first choice. But the good news for England is that we now have two options and will never have to see Kieran Trippier there again. Whoop.

12 (15) Phil Foden
This canary could go on to sing 100 times for England. He is simply a very good footballer, regardless of his age.

13 (7) Marcus Rashford
‘A shoo-in for the squad but needs to be a) available and b) better in March,’ is what we wrote in November. He could not manage b).

14 (27) Kalvin Phillips
Played more minutes than any other outfield player across these three World Cup qualifiers. And we absolutely did not see that coming. Gareth just wants to feel as safe as we all do.

16 (10) Kieran Trippier
Should any national squad really include three right-backs? It’s a moot question because this squad absolutely will. They’re like crack to Southgate.

17 (19) Dominic Calvert-Lewin
His start (and double) against San Marino told us what we already knew: the Everton man is England’s back-up option for Kane. And it’s likely that a 23-man squad will only contain one specialist back-up as both Rashford and Sterling can play there.

18 (16) Conor Coady
Preferred to Tyrone Mings to start the San Marino clash so appears to be ahead of the Aston Villa man right now, especially if Southgate is still harbouring plans (he clearly is) to play three at the back.

20 (17) Tyrone Mings
Unlike Eric Dier, he did actually get on the pitch over this international break. That’s enough centre-halves now, Gareth.

21 (18) Reece James
There are never enough right-backs though. Unless your name is Trent Alexander-Arnold, and then your name’s not down and you’re not coming in.

22 (21) Dean Henderson
Got to be a right kick in the balls to not get even a minute of football when Jordan Pickford is missing.

23 (23) Bukayo Saka
If it’s a straight fight between Saka and Jadon Sancho then we think Saka prevails because he offers precious versatility; all his England appearances so far have come at left wing-back.

24 (22) Jadon Sancho
Not played a full 90 minutes for England since late 2019 so needed a performance for England more than most. Then he got injured. We have a feeling about this and we’re not alone.

25 (RE) Jesse Lingard
“I realistically did not think I would be sitting here today picking a squad with John Stones and Jesse Lingard in it.” Nor us, Gareth, nor us. And yet we would not be utterly surprised to see Lingard in the squad ahead of Grealish. It would be very on brand.

26 (12) Eric Dier
The only outfield player not to get a minute over these internationals. His only hope is that Southgate panics and includes him as a utility man but being benched for Tottenham will surely see him cast further into the cold.

27 (24) Trent Alexander-Arnold
Note the number in brackets; it really wasn’t a shock that he was left out of this England squad. He will undoubtedly be back once the 30-year-olds run out of steam.

28 (30) James Ward-Prowse
He’s basically in if Henderson is out.

29 (36) Jude Bellingham
It’s probably come just a little too soon for Bellingham. If Southgate considered him a genuine tournament option, he would surely have started at least one game in March.

31 (20) Harry Winks
November really was an awful long time ago. Two assists in three internationals and then almost nobody noticed that he did not feature in this latest England squad.

32 (NE) Ollie Watkins
One game, one goal. He will be hoping he is more Kane than David Nugent.

33 (28) Michael Keane
Genuinely has more reasons to feel aggrieved about his demotion than Alexander-Arnold.

36 (RE) Aaron Cresswell
Offers a versatility that could be useful in a tournament setting. But we’re not quite at Micah Richards of incredulity about his exclusion.

37 (29) Ainsley Maitland-Niles
That West Brom loan was really not a good idea.

38 (38) Tammy Abraham
Desperately needs a move this summer; he won’t get the football he needs at Chelsea.

39 (NE) Ben Godfrey
Surely the next cab off the central defensive rank now that his England Under-21 duties are over.

40 (37) Aaron Wan-Bissaka
Did we envisage a time when Manchester United’s starting right-back would not have a prayer of playing for England?