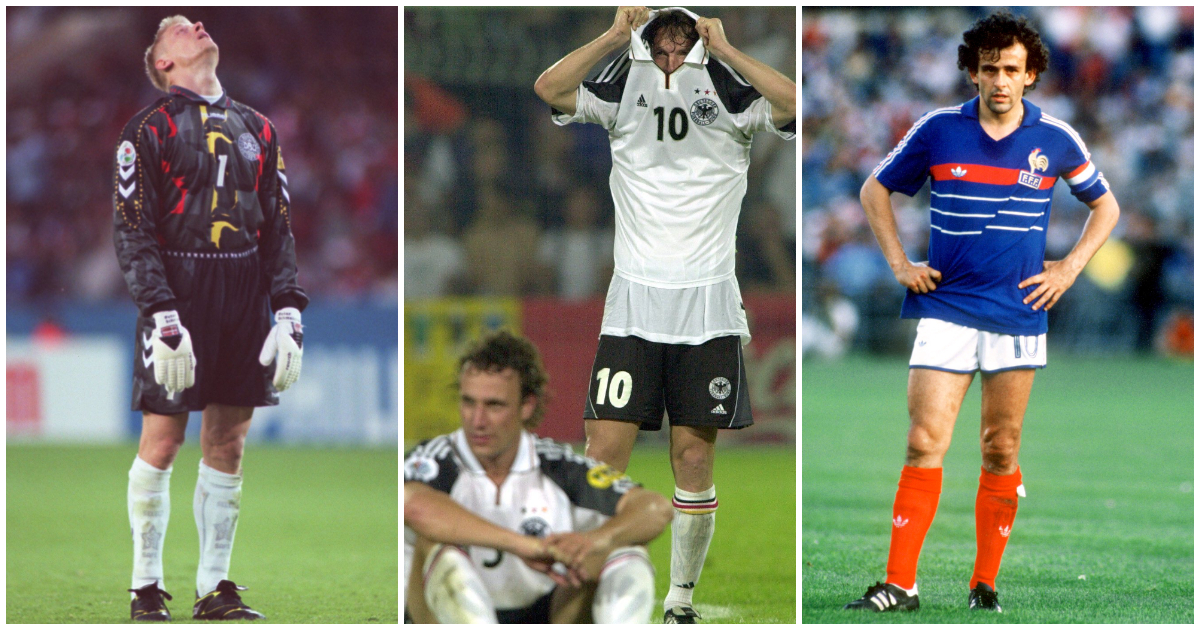 Portugal face the prospect of failing to make the knockout stages at Euro 2020. They wouldn’t be the first defending champions to surrender their title meekly…

West Germany 1984
There was no talk of best third-place finishers at Euro ’84. It was a simpler time, with eight teams in two groups that were decided inside a week.

It proved to be a miserable seven days for the holders. West Germany started with a goalless stalemate against Portugal in Strasbourg before moving on to Lens, where Rudi Voller’s brace gave Jupp Derwell’s side a 2-1 victory over Romania.

The holders needed only a point from their final group game against Spain in Paris to secure a place in the semi-finals and they looked on course to get it until Antonio Maceda headed in a 90th-minute winner for Spain.

The Spaniards went on to reach the final, where they lost to France. As a consequence of their early exit, West Germany fired Derwell and replaced him with a managerial rookie – Franz Beckenbauer.

France 1988
Spain were beaten in the final by France at Euro ’84, with the hosts inspired by Michel Platini’s nine goals in five matches.

But Platini retired in 1987, a year before France became the third holders in the history of the Euros to fail to qualify for an attempt to defend their crown.

France weren’t even close. Only the qualifying group winners made the finals and Henri Michel’s side finished third behind East Germany and Soviet Union after winning only one of their eight matches.

Michel kept his job until October 1988 when he was forced out after a World Cup qualifying draw with Cyprus, when Platini took over as coach.

Denmark 1996
The Danes’ performance at Euro ’96 was perhaps a reversion to the mean after their stunning triumph in 1992, when they went all the way after entering the tournament late as last-minute replacements for war-torn Yugoslavia.

Denmark were still the highest-ranked nation in Group D, where they had Portugal, Turkey and Croatia for company.

Peter Schmeichel was named man of the match in their opening draw with Portugal at Hillsborough, but there the Manchester United goalkeeper was shown up by Davor Suker in the second match, with the Croatia star’s chip crowning a 3-0 win for the tournament debutants.

Denmark went into their final match retaining hopes of reaching the next phase but their 3-0 win over pointless Turkey was rendered inconsequential by Portugal’s win by the scoreline over Croatia.

Greece 2008
The same could be said about Greece at Euro 2008. Their performance in Austria and Switzerland was much more in line with expectations than their staggering win in Portugal four years previously.

Like Denmark, they were ranked 11th in the world when they went to defend their title but they finished the tournament as its worst team.

Greece lost to Sweden and Russia in their opening two matches. At least they scored against a Spain side featuring 10 changes having already been assured of progress to the knockout stages, but the eventual winners fought back to send Greece home without a point, a fate that has befallen only seven other teams in the history of the European Championships.

Germany 2000
Germany were a mess at the turn of the millennium. They struggled to find a manager after Berti Vogts retired in 1998, turning to 61-year-old Erich Ribbeck, who emerged from retirement in the Canary Islands to take the top job he had been linked with two decades previously.

There was a similar lack of fresh playing talent – and it showed in Belgium and Netherlands.

Germany started with a 1-1 draw with Romania before going down 1-0 to Kevin Keegan’s England. Just one point from their opening two matches left Germany’s fate out of their hands but the holders failed to do their bit anyway.

They were ruthlessly dismantled 3-0 by a second-string Portugal side which was resting players for the next phase.

Germany were sent packing after their worst performance in a major tournament since the war. Never before had they failed to win a single match at a European Championship finals.

The embarrassment prompted Ribbeck’s resignation and a review which saw German football get its sh*t together with a mass restructure and huge investment in developing young talent.