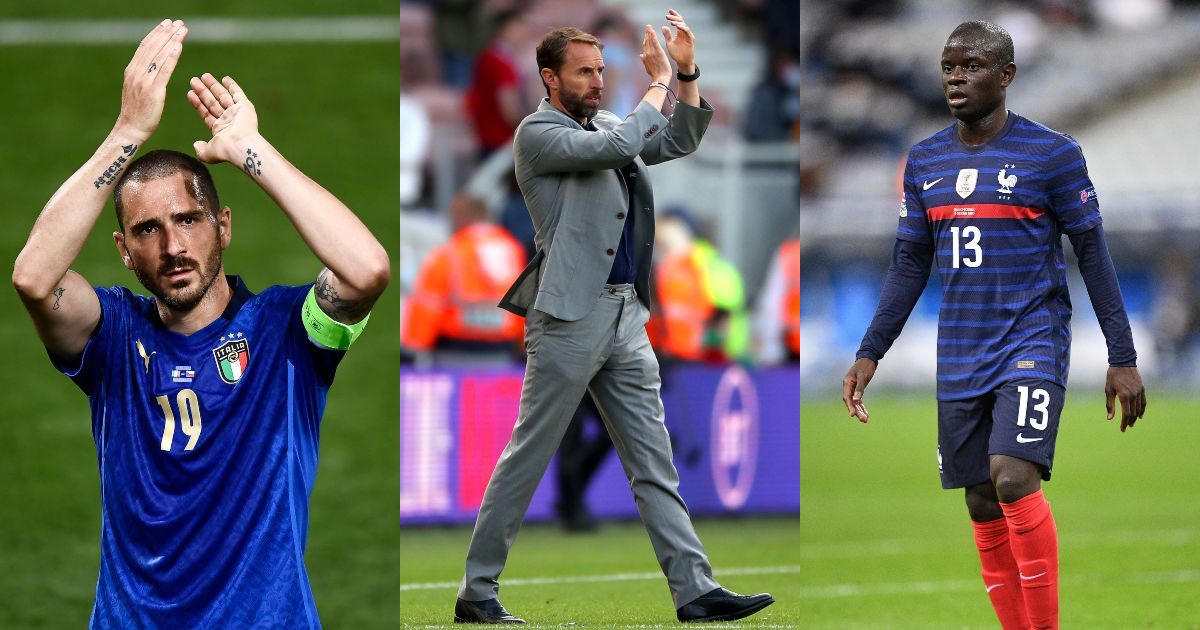 Never afraid of making ourselves look like utter fools, we have come together to make some Euro 2020 predictions. And as usual, we will be back to laugh at ourselves by mid-July. Enjoy and make your own predictions in the comments…

Right, who is going to win the whole damned thing?
Sarah Winterburn: I am going for the form team. And that means Italy, who could grind this one out like one of those waiters with the over-sized pepper mills.

Matt Stead: France. The boring answer is often the right one.

John Nicholson: I strongly fancy Italy. They’re on a tremendous run, have a great team spirit and still have Giorgio Chiellini in defence who is now 87. They’re well-balanced between youth and experience and playing in Rome. The only fly in their expensive moisturiser is if Ciro Immobile can reproduce his domestic goal-scoring feats on the international stage.

Will Ford: France. ‘Cos N’Golo Kante.

Dave Tickner: Arsene Wenger is right and cute to describe France as ‘super favourites’ but that’s a boring answer. After watching Portugal grind their way to glory five years ago and given the unique circumstances of this year’s event and the 18 months that preceded it, an arduous, low-quality grind of a tournament looks very possible. And Italy are well placed to take advantage of that. They haven’t lost a game in three years, have kept clean sheets in 20 of their last 27 games and look to have a decent group-stage draw and easyish last-16 game should they win Group A.

Ian Watson: England. Why not? Okay, there are several very good reasons why not. But it’s the tournament eve and I’m choosing to ignore them because it’s coming home with Gareth’s glory boys.

Name me the four semi-finalists too. And yes, that means actually working it out.
SW: Italy, France, Spain (who will beat England in the quarter-finals) and Belgium.

DT: I’ve got Italy beating France and Netherlands beating Spain which I’m pretty sure can happen but I can’t in all honesty rule out the possibility I’ve made a balls of it somewhere. I mean…it definitely won’t actually happen, but I don’t think it breaks the actual tournament mechanics which really is all anyone can ask.

Who will be the biggest team to flunk at the group stage?
SW: Croatia. I think they will finish below even Scotland. Yes, even Scotland.

MS: Slightly annoyed you’ve not asked for the biggest country, thus leaving Russia open as the banter option. The third-placed safety net will rescue Group F stragglers Germany. Going by the rankings the best team not to make it out will be Switzerland.

DS: Whoever finishes third in Group F is the obvious shout, but I’ll say Wales get no points in Group A, which probably counts.

JN: Germany look like the big sulphurous egg in the nest. With France and Portugal in their group, I think they’ll finish fourth the group, even behind Hungary.

JW: Portugal, if you call that a flunk in a group including France and Germany. If not, then I would go for the Netherlands.

WF: I fancy Hungary to snatch a draw against one of the Group F titans and scupper them. Germany? Yes, Germany. Timo Werner to miss the crucial chance.

DT: Obvious answer is obvious, but Germany. They have had some more shonky results since their shonky World Cup, and we may have to accept the possibility that sometimes you actually can write off the Germans. They face Portugal and France in their first two games – lose those and even a victory over Hungary in the final game of the group might well not be enough to sneak through. All six third-placed teams five years ago finished with three or four points and only one of them – Northern Ireland – made it through with a 1-0-2 record.

IW: The format makes it unlikely that any of the big hitters will flunk at the group stage. With three qualifiers from four groups, even the group of death – Group F – becomes one of mild discomfort. So, er, Sweden?

Which player will win the Golden Boot?
SW: They will all say Romelu Lukaku but I am going left-field on Ferran Torres. Everybody seems to be dismissing Spain and that is el error.

MS: Romelu Lukaku will flat-track bully that group to smithereens and win it on those goals alone.

DS: I haven’t come this far for this long to not pick Romelu Lukaku. I just want to interview you over the course of several long hours, Rom. Value bets on Burak Yilmaz and Memphis Depay.

JN: Robert Lewandowski. I fancy Poland to go all the way. This will be a tournament of goals, they’ve got a great front three and the best striker in Europe.

JW: Karim Benzema. He scored 30 goals in all competitions for Real Madrid this season and he’ll be looking to impress in what could be his last major tournament for Les Bleus.

DT:Romelu Lukaku is a worthy favourite given his own quality, some useful creators behind him and most importantly an easy group where Golden Booters generally get the bulk of their work done, but Memphis Depay ticks a lot of the same boxes. In form – seven goals in his last seven internationals and a 20-goal Ligue 1 season for Lyon – and Holland’s group isn’t the toughest with North Macedonia in particular a potential (golden) boot-filler.

IW: If England win it, it’s partly because Harry Kane has scored all the goals. Otherwise, Romelu Lukaku. So long as he’s learned his lesson from 2018 and he hasn’t spent the last few weeks pulling 737s with his teeth.

Who will win the Player of the Tournament award (claimed by Antoine Griezmann five years ago)?
SW: If I am picking Italy to grind then I am picking Leonardo Bonucci to be master grinder.

DS: I can’t look past Kylian Mbappe, but he’s the favourite. Instead, let’s go for N’Golo Kante who people finally seem to be judging as the complete central midfielder rather than a pure holder.

JN: N’Golo Kante. He will cover more ground than anyone and that’s got to count for something.

JW: N’Golo Kante. Arguably Chelsea’s most crucial player on their way to Champions League glory. Will back that up with a sensational Euros.

WF: N’Golo Kante. Give it to him now.

DT: N’Golo Kante because we’re in one of those happy spells that pop up every now and then when everybody decides to notice what he does for a while. Should France prevail in an arm-wrestle slog of a tournament, his midfield mastery is likely to have been pretty important.

IW:Harry Kane. If England don’t win it – they will – then Kevin De Bruyne. Even with a fragile face.

Which young player will become a massive bloody star?
SW: I have a whole lot of ideas for this. But I am sticking with the Italian theme and saying Manuel Locatelli.

DS: I don’t think he starts their first game, but at 18, Pedri is the next great hope for Barcelona and might be the same for Spain too.

JN: Jude Bellingham. He will emerge as England’s only star in what will be painted as a national humiliation for which someone must die.

JW: Bit of a Chelsea theme but Kai Havertz. He grew into the season at Stamford Bridge and I expect him to take the European Championship by storm.

WF: Pedri. Yet another ‘new Iniesta’, but one of very few that’s actually a bit like Iniesta. Lionel Messi loves him and that’s good enough for me. Look out for the defence-splitting passes.

DT:Ferran Torres isn’t exactly unknown given he plays for actual Manchester City but I’ll wager he ends this tournament a bigger name than he starts it. Unlike a lot of players he’ll arrive reasonably fresh having been in and out of the City team, and does look to have played his way into Spain’s first-choice XI. He’d started six games in a row before sitting out their final friendly – and even that absence is probably a positive indicator for his involvement when the serious business begins. Torres also scored five goals in those six starts, including three in that 6-0 spanking of poor old Germany. Group games against Poland, Sweden and particularly Slovakia should offer plenty of opportunities.

How will England fare?
SW: Quarter-finalists before being beaten by Spain. No shame in that. Except for all the shame.

MS:  Finish top of the group with two wins and a nervy draw against Scotland. Avenge those defeats to Portugal in the last 16 with Cristiano Ronaldo sent off for stamping on Luke Shaw’s testicles. Put out by Spain in the quarters by a late goal from Ferran Torres, who is booed mercilessly during every away game for the next season.

DS: Finishing top of Group D is a bad thing to do. You face one of Portugal, France or Germany, who have already warmed up nicely. So that’s where it ends, cue mass anger and withering assessments.

JN: Third in the group but qualifying. Then losing to Belgium in the Round of 16.

JW: We will win our group comfortably before being knocked out in the last 16 by Germany on penalties.

WF: They’re going to draw France in the last 16, who will turn it on having been distinctly average up to that point. Maguire to score a bullet header in his first appearance of the tournament before being given the absolute runaround by Mbappe. A 4-1 defeat.

DT: Win Group D with something to spare, lose gallingly and infuriatingly to Portugal in the last 16, very probably on penalties.

IW: Knighted in the New Year’s Honours List. All of them. Marcus Rashford becomes PM.

Now tell me which Gareth Southgate ‘mistake’ will be held over him forever.
SW: Playing a back five and two holding midfielders in that quarter-final with Spain.

MS: Rushing Harry Maguire back to play in the quarter-final, although it is only to ensure Tyrone Mings is further away from the team than ever.

DS: Setting up too defensively, even though recent history proves that a perfectly acceptable strategy for major tournament football.

JN: Let me tell you, for a man in his 50s, a pair of grey trousers is not a friend to Mr Squirty. If Gareth insists on the grey suit, I predict half-time mis-directed ablutions cause national embarrassment and somehow the cause a 3- 0 defeat to Belgium, leading to ‘Piss Off!’ headlines.

JW: Taking Jordan Henderson and Harry Maguire. Not that it will have any impact whatsoever on performances.

DT: I’ll give you two: not starting Jack Grealish and thinking we should improve society somewhat.

IW: His choice of dungarees to replace the waistcoat. But M&S will still sell out long before opening on July 12.