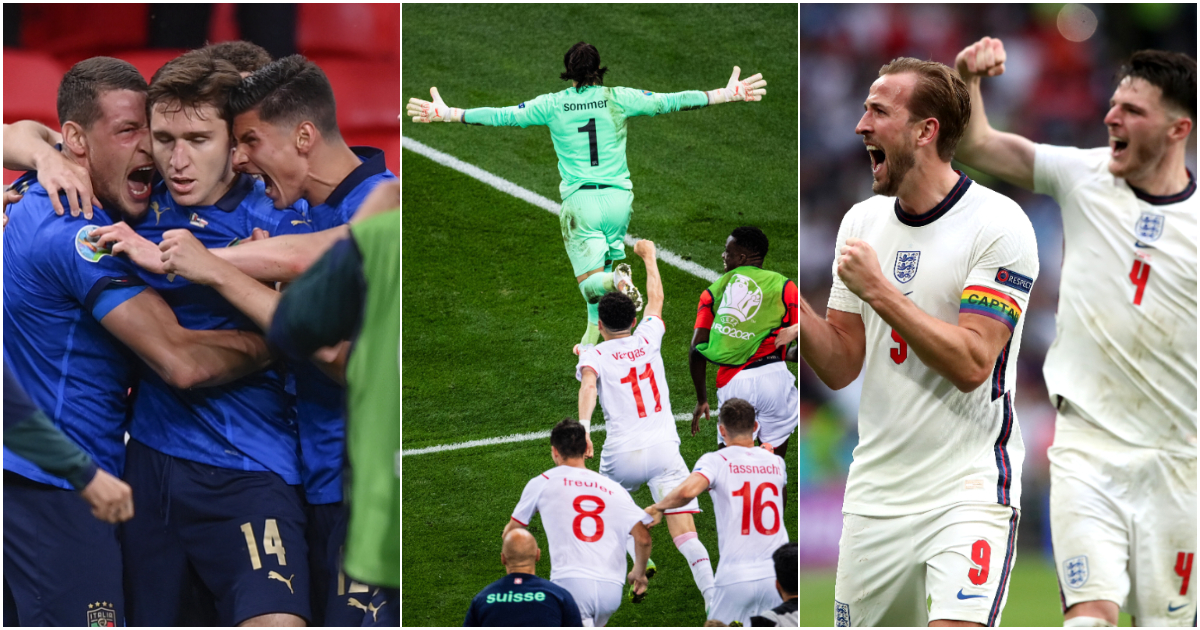 The Euro 2020 quarter-finals look tantalising. England need to capitalise on the Germany win and cancel out the Andriy Yarmolenko narrative.

Sometimes the phrase ‘Big Weekend’ can feel a bit fraudulent, or even sarcastic. This one, not so much.

“I was the party pooper in the dressing room – I just said that it means nothing if we don’t capitalise on Saturday now. We’ve given people another day to remember, and now we’ve got to do it in Rome.”

He’s right, you know. Not about it meaning ‘nothing’ – much like the penalty shootout win over Colombia three years ago the significance and demon-exorcising power of a knockout win against Germany will never entirely lose its power whatever comes next – but the wider point is there. England have given themselves a wonderful chance that they really do now have to make sure they take.

All the talk of finishing second for easier knockout-stage progress was always a bit daft. It only ever made the last-16 clash theoretically easier (something Croatia might now dispute) and would’ve dumped England into the tougher half of the draw. It’s not like three years ago in Russia when finishing second got England a run of Colombia, Sweden and Croatia while group winners Belgium had Japan, Brazil and France.

But by winning the group and disposing of a distinctly non-vintage German side, England have another tournament that has opened up quite magnificently for them. Ukraine are a capable side with a couple of match-winners and a few stunning moments already in this tournament, but you’d settle for playing them in a quarter-final every single time. And that goes for Denmark and the Czech Republic in the semi-final with knobs on.

For England, though, the challenge is very different to the Germany game. That was an emotionally charged event with decades of history on it – no matter how many tiresome grown-ups on Twitter were at pains to point out that actually you’ll find that in fact actually Germany don’t really care about playing England actually – in front of a raucous and emotional Wembley crowd.

Whatever happens, this Italian Job in Rome will be England’s away game and they will need every ounce of the professionalism that has carried them this far and perform for the first time under the weight of tournament favouritism. Russia 2018 looked like it might have been a once-in-a-lifetime opportunity; another has come along just three years later.

Southgate will likely make changes again having set his side up to match Germany in the last 16 – although Ukraine also went with a back three in their second-round clash with Sweden. The England boss must also decide whether to risk playing his preferred midfield duo of Declan Rice and Kalvin Phillips despite both being a booking away from suspension or risk leaving them out after both have had such influence on the results so far. He may also opt for Jack Grealish from the start in a game when the onus will be on England to unlock a team that will look to frustrate. In any case, whatever Southgate decides, he’s earned the right for those calls to be backed.

Other game to watch – Italy v Belgium
For all the “ENGLAND ARE NOW THE FAVOURITES!” chat and for all that England were very good indeed for between 15 and 75 minutes against Germany depending on how cheerful you are about these things, the main reason that England are favourites is because the two teams left conspicuously better than them are playing each other on the other side of the draw. Whoever wins this one will be the new favourite.

And it will probably be Italy, who simply cannot be stopped (although Austria gave it a red hot crack in what for about five minutes looked like being the closest we came to a surprise in the last 16) because Belgium’s Golden Generation a) have a history of bollocksing these things up at around this stage of proceedings and b) are almost certainly without two of their shiniest goldenest stars in Eden Hazard and most gallingly Kevin De Bruyne.

That Belgium defence could be made to look awful old awful fast by this Italy side who will be pretty confident of shutting down supply lines to Romelu Lukaku in the absence of the Red Devils’ two most senior mischief-makers.

With all that cold, hard logic pointing to an Italy win, then everything we know of this tournament so far tells us to expect a 3-0 Belgium victory here.

For the record, you should also watch the other two quarter-finals this weekend. They are all games to watch. Obvs.

Player to watch – Andriy Yarmolenko
One of the undoubted stars of the tournament, with two goals and two assists so far in Ukraine’s run to the last eight. Yarmolenko’s goal against the Netherlands was spectacular, but the outside-of-the-boot assist for Oleksandr Zinchenko’s opening goal against Sweden was pure sauce. A pass few players would have spotted inside a packed penalty area and even fewer still could have executed.

And while nobody needs greater incentive to perform in a Euro quarter-final, a player who managed just one start – lasting 72 minutes of a 0-0 draw with Southampton – during West Ham’s excellent season would dearly love to show England what he’s capable of.

Teammate Ruslan Malinovskyi thinks so anyway. “He’s a real captain,” the midfielder said. “He takes the team with him, he will be fit and motivated to play against England because for him it’s a little bit special: he plays in England and so against the national team it is a chance for him to show that he deserves to play in the Premier League.”

West Ham won the World Cup for England in 1966, so we probably shouldn’t grumble too much if they cost England a tournament win as well.

Team to watch – Switzerland
Will appropriately enough once again carry the neutral support as they continue to plot their straightforward course through the Euros. Having dumped out France in the game of the tournament so far, it’s just Spain next in Switzerland’s first major quarter-final since 1954. Win this one and then they only have Italy or Belgium to worry about in the last four. The final against England after that will be an absolute cakewalk.

Just to keep the difficulty tariff high, Switzerland must also deal with Spain without the suspended Granit Xhaka who was so good against France in the previous round that even L’Equipe gave him a six out of 10 in their player ratings.

Had Switzerland lost that shootout to France there would still be an argument that they had put up the best team performance of the competition so far in the thrilling 3-3 draw that preceded it. Having won the shootout that fact is now beyond doubt. Switzerland were magnificent on the night and a talented yet mercurial Spain side should hold no particular fears.

What we should get to enjoy is some goals. Switzerland have scored six in their last two games, and Spain just the ten. Late drama in the 90 minutes should also be expected based on their last-16 clashes. This weekend really is going to be great.