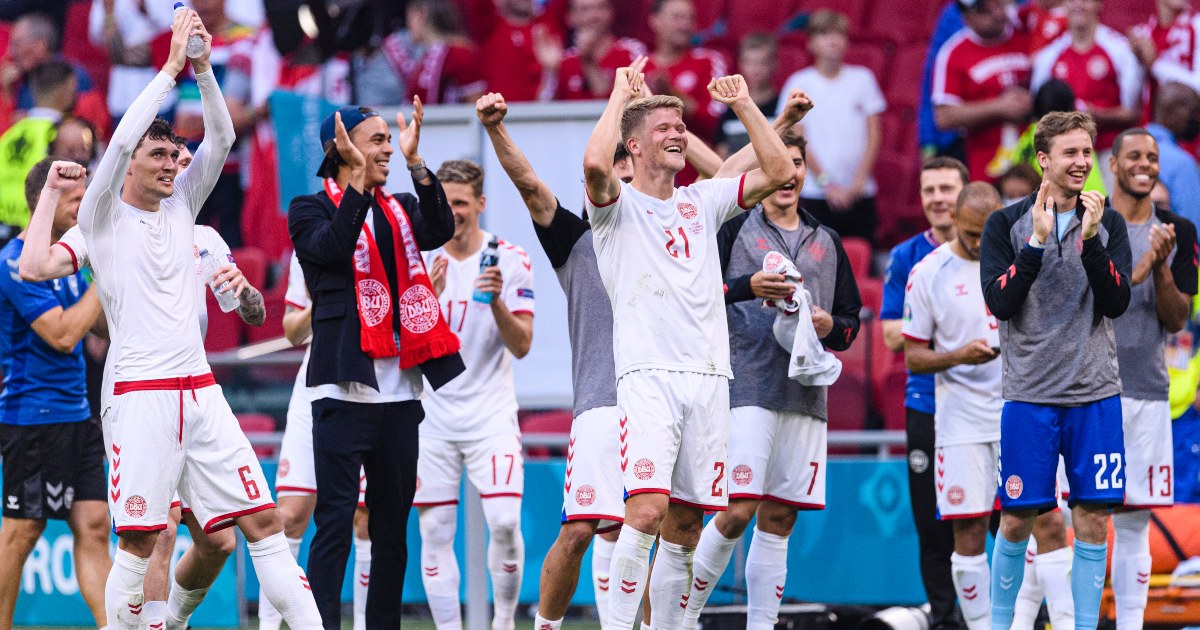 You might not have heard but England play Denmark in the Euro 2020 semi-final on Wednesday night.

The Danes have become many people’s second team during this tournament in the wake of Christian Eriksen’s cardiac arrest in their opening game. They have certainly ridden a wave of emotion, but there are plenty of reasons besides why Denmark could inflict another disappointing semi on England. Here are five…

Denmark are as tactically flexible as England
Much of the discussion in the lead-up to kick-off at Wembley will focus on Gareth Southgate’s selection and England’s tactics, but Southgate will have to take a best guess at what the Three Lions might be up against on Wednesday night.

Because Kasper Hjulmand and his players have proved themselves to be just as tactically versatile as Southgate and England. Denmark started the tournament in a 4-3-3 but after losing Eriksen, Hjulmand switched to three at the back and it has, for the most part, been hugely successful.

When that system wasn’t getting the best out of the Danes, Hjulmand recognised the problem quickly and applied a fix so fast it must have been pre-prepared. For 20 minutes against Wales, Denmark were getting pushed back by Gareth Bale and Daniel James, while Aaron Ramsey was seeing enough of the ball to pull strings in midfield. By switching seamlessly to a back four, with Andreas Christensen moving into midfield to get between Ramsey and Kieffer Moore, Denmark immediately asserted their authority and scored four to highlight it.

They beat Czech Republic with a back three, which only looked in any danger for 10 minutes at the start of the second half. Whichever system Southgate opts for, Hjulmand, if he chooses, can match his men with England. A back three would allow Joakim Maehle to get forward down England’s right, while a four could see Christensen muzzle Chelsea team-mate Mason Mount while depriving Harry Kane of the space he enjoys dropping into.

Danish defence can keep Kane and co. quiet
Whether they number in three or four, Denmark are defensively very sound. It’s fortunate for England that Harry Kane has boosted his confidence with three goals in the last two matches because the England centre-forward will need it when he takes on Simon Kjaer, Jannik Vestergaard and Christensen.

The fact that Kasper Schmeichel has had fewer saves to make than Jordan Pickford, even if England are yet to concede a goal, illustrates the solidity of Hjulmand’s team. And the centre-backs are extremely well insulated.

Behind them, Kasper Schmeichel has been as solid as Leicester fans have come to expect, while Pierre-Emile Hojbjerg and Thomas Delaney do an excellent screening job, even if Hojbjerg is allowed a little more freedom to roam than he was granted for much of the season at Spurs. Together, they have attempted the most tackles of any of the four nations remaining and recovered possession more often than any of the other finalists.

Thomas Delaney won more duels than any other player vs. Czech Republic (11).

He also made the joint most interceptions (3) and scored in a major tournament for the first time. 💪 pic.twitter.com/oMAxnOvegp

Their attackers are flying
That is not to say Denmark have defended their way to the semi-finals. Quite the opposite.

The Danes have had more possession than England – only four nations have enjoyed a higher average percentage than Denmark’s 54.2% – while only Spain have scored more goals.

In terms of attempts on goal, between England and Denmark, it isn’t even close. Only Spain and Italy have attempted more shots than the 90 Denmark have tried. For comparison, England have mustered only 37 shots on goal, still fewer than Scotland, who went home almost a fortnight ago.

Their total of 11 goals at the Euro finals is a Danish record, while no team had scored four goals in successive matches prior to Denmark achieving the feat in their last group game and last-16 clash. Okay, so Spain almost immediately eclipsed that benchmark by scoring five times in successive matches, but that doesn’t detract from how impressive Denmark have been going forward.

And they have been this potent without their best player. Denmark reorganised after the horror of Eriksen’s emergency and Hjulmand’s front three is a fluid unit, with Kasper Dolberg, Martin Braithwaite and Eriksen’s stand-in, Mikkel Damsgaard, all finding the net, among seven Danes to score in the tournament.

11 – Only Spain (12) have scored more goals than Denmark at #EURO2020, with this now the Danes' best return in a single edition at a European Championship/World Cup. Legs. #CZEDEN https://t.co/MlpQpdidZL

Right-footed left-backs have been something of a trend this tournament, but no one has done it better than Maehle. As a wing-back, the 24-year-old delivered one of the passes of this or any other European Championship against Czech Republic when he bent in a delivery so sexy, Dolberg wasn’t sure whether to score or sh*g it.

Maehle’s threat is one for Southgate to be most wary of, especially if Denmark opt for 3-4-3. Ukraine targeted Kyle Walker on his inside when they had their brief spell of pressure on Saturday, and that won’t have gone unnoticed by Hjulmand and Maehle. Walker is more comfortable in a back three and if Southgate sticks with the Manchester City defender as full-back in a four, then he will have his work cut out dealing with Maehle’s incisive passing and running. 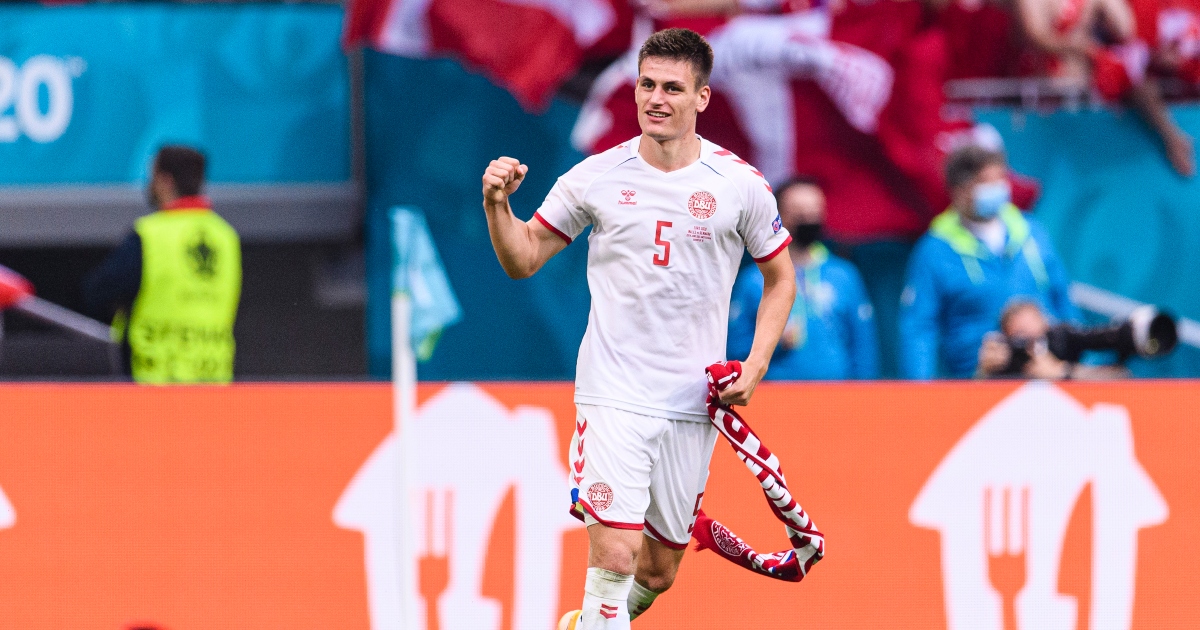 Denmark were winning consistently before Eriksen’s ordeal
It is impossible to ignore the extra motivation Denmark have taken from Eriksen’s absence. As spirited as England clearly are, they will meet a side on Wednesday just as determined, resolute and focused on going even further for their stricken team-mate.

But it is not the impetus provided by the horror they endured together just before half-time in their opening game that has propelled Denmark to the semi-finals. They were a damn good side in fine form coming into the tournament.

Like England, they had won eight out of 10 matches in the run-up to the Euros, with only Italy boasting a better record over the same period. Going back further, they had won 12 out 16, failing to score in only one of those fixtures, while the Danes have tasted defeat in only four of their last 33, a run that included a victory at Wembley and a draw in Copenhagen against Southgate’s England.

This is a tight-knit team familiar with one another – more than half the 26-man squad went to the last World Cup compared to nine of England’s players – with Hjulmand’s nous since taking over a year ago adding an extra dimension to the Danes.

Denmark may well win the Euros for Eriksen. But any triumph won’t be a consequence of what stirred them, rather the quality Hjulmand possesses throughout his ranks.