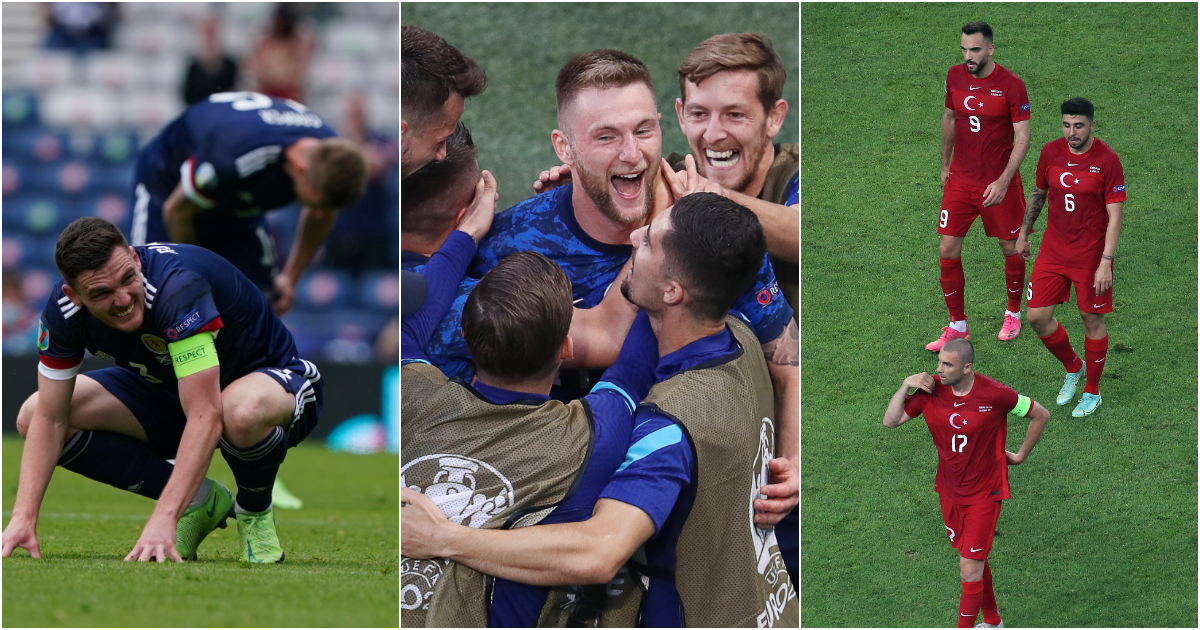 Inspired by seeing someone say that starting a tournament with back-to-back 3-0 victories is actually bad because “they’ve peaked too early”, we decided that it must be possible to find at least one positive and at least one negative for every team after the first week of Euro 2020. Some of these were quite hard.

Positives: Have won both their first two games 3-0 which is <checks notes> good. Safely through to the last 16 with minimal fuss and have now scored 31 goals without reply since a 1-1 draw with the Netherlands in October. Assuming they win Group A, will play whoever comes second behind the Netherlands in Group C and both those possible teams are rubbish.

Negatives: ThEy’Ve PeAkEd ToO eArLy m8. Can’t win a tournament in the first week. A proper tournament-winning Italian side would have lost a game 1-0, had someone sent off and stayed alive by scraping a 1-1 draw. Having foolishly gone so long without conceding a goal, when they do concede one it will now almost certainly be an 89th-minute (or better yet 119th-minute) winner in the final because football.

Positives: Are at it again. Gareth Bale and Aaron Ramsey are approaching Kane-Son levels of telepathy. Barring disaster in Rome now look certain to finish second in Group A which carries the tantalising reward of facing one of a trio of eminently beatable Group B runners-up in the last 16: Finland, Russia or Denmark.

Positives: They don’t have to play Italy again. Beat beleaguered Turkey and they will most likely still find themselves in the last 16, their natural home.

Negatives: That really was a bruising defeat to the rampant Italians. Barring unlikely final-day goal-difference swings are now at best looking to get through as a lucky third-place team. Depending on how the third-place scenarios fall, that sends Switzerland one of three ways. Down the likeliest path (five of the 10 possible permutations, fact fans) lie the winners of Group F, which will be France or maybe Portugal. Down the next likeliest path lie (near certain) Group B winners Belgium. Ah.

Positives: Their ‘home’ kit is lovely. They haven’t worn it yet, but it is lovely. That’s something, isn’t it? Despite losing both their opening games by a combined 5-0 they are not yet technically eliminated. God bless the third-place safety net, even if realistically you are going to miss it quite badly as you fall.

Negatives: Transparent attempt to bore Italy into accidentally giving them a goalless draw in the opening game failed dismally. Failed to learn from many, many warnings throughout the first half against Wales that Ramsey’s delightful runs from midfield were being found really quite easily and frequently by Bale.

Positives: Two games and two wins is generally considered good news. Are through, which is good, and almost certainly as group winners which is also good, and winning their group means they’ll play a third-placed team next which is good because on early evidence most of those teams are going to be a bit rubbish. In summary then: good.

Negatives: Romelu Lukaku has only two of the four or five group-stage goals his great many top goalscorer backers would have been hoping for. Any England fan will tell you that the pressure of trying to deliver success in tournaments offering One Last Chance For The Golden Generation is all-consuming. In fairness, it’s yet to be determined what impact that has on a Generation that is actually Golden. A likely quarter-final against Italy already looms ominously for Belgium and enticingly for the rest of us.

Positives: Beating Finland. Only two teams who won a game were eliminated in the group stage five years ago. Anything against a Denmark side who have – albeit with some hefty mitigation – lost two from two and Russia are through to the last 16.

Negatives: Getting thrashed by Belgium. Were more than slightly fortunate Finland froze on their big day and simply don’t look anything like the side that stormed to the last eight of the World Cup three years ago.

Positives: Beat Denmark to give themselves a glorious chance of reaching the knockouts in their first ever major tournament.

Negatives: Piddled that chance away with barely a whimper.

Negatives: Yeah, pretty obvious. And it could so easily have been so very much worse.

Positives: Two wins. Guaranteed top spot in Group C, which is a significant prize: they now face a third-place team in the last 16 and if they get through that then it’s a runner-up (at present looks like Wales or Russia) in the quarter-final. Denzel Dumfries on track to win the Golden Boot, in accordance with the prophecy.

Negatives: The defensive frailty that let Ukraine back into their opening game is a worry for a team around whom doubts inevitably remain when the stakes are high and the chips are down after their twin qualifying failures in 2016 and 2018.

Positives: If they beat a middling Ukraine side they’ll finish second in Group C.

Negatives: Second in Group C most likely means a last-16 clash with Italy.

Positives: If they beat a middling Austria side they’ll finish second in Group C.

Negatives: Second in Group C most likely means a last-16 clash with Italy.

Positives: Have had a couple of memorable moments in their first major tournament, including a goal for 423-year-old national treasure Goran Pandev.

Negatives: Managed to get fully and totally and irrevocably knocked out of the tournament with a game to spare, which under this format is almost impressive.

Positives: Won one of the vanishingly few genuine must-win games in the first round of group action, and probably secured the goal of the tournament prize in the process.

Negatives: It only gets progressively more difficult from here, and may have exhausted their supplies of good fortune on matchday one. 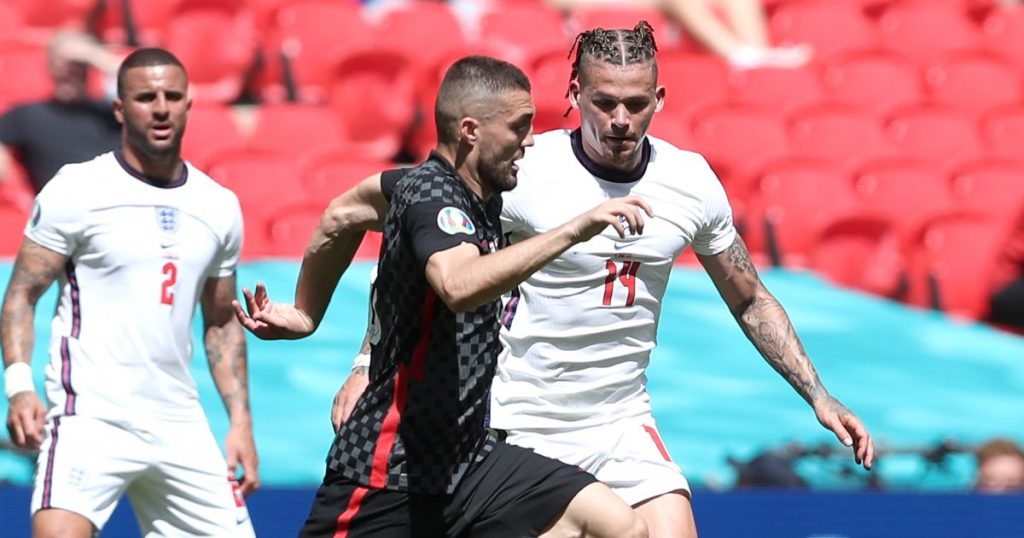 Positives: Football’s coming home. The Yorkshire Pirlo. A clean sheet. A first ever win in an opening European Championships game. A distinctly un-English tournament display against decent and seasoned opposition.

Negatives: Harry Kane is rubbish now. Firmly on course to win their group and collect their French/Portuguese/German booby prize like big idiots.

Positives: Scotland and Czech Republic are not as good as England.

Negatives: The 2018 World Cup runners-up suddenly look awful old and rather slow. A tournament too far for a few?

Positives: Umm… well… a player called Dumfries is doing really rather well? The performance against the Czechs had some genuinely encouraging moments.

Negatives: Lost 2-0 at home to the weakest opposition they will face.

Positives: A dream start to the tournament. Beating Poland was a huge result, while Spain and Sweden drawing theirs has opened Group E right up in their favour. First or second place in that group has a decent last-16 outcome. The winners get a third-place team, the runners-up get second from Group D. Could be Czech Republic…

Negatives: Grasping at straws a bit here, but Sweden and Spain are unlikely to make things quite as easy as the self-destructing Poles did.

Positives: Nobody is really talking about them; they’re flying under the radar and still have loads of quality.

Negatives: Nobody is really talking about them; they’ve lost their aura and nobody is frightened of their toothless tiki-taka.

Positives: A point against Spain was a perfectly acceptable opening result, made even more so by Poland looking to once again be firmly in Tournament Poland mode (i.e. crap).

Negatives: Yes, they were perhaps a bit negative.

Positives: Victory over Hungary was mandatory, but the ultimately resounding nature of it gives them a bit of leeway even if things do go wrong against France and Germany. We know what these lads can do from a third-place finish. Have now already won as many games in 90 minutes at this tournament as they did five years ago, and they won that tournament so… Ronaldo is in the mood, scoring goals and bothering sponsors. That hooped away kit is fire.

Negatives: Those first 83 or so minutes against Hungary weren’t that great, no matter how good the last few were.

Positives: Beat Germany away from home in a major tournament without ever really looking like they were having to try all that hard. Even with this current reduced-status Germany that is quite something. N’Golo Kante. Kylian Mbappe. Still very much the team everyone else has to beat.

Negatives: Would we have liked to see more than a fairly early own goal to show for all their excellence against Germany? Greedily and perhaps harshly, yes. Yes we would. That’s about it, though.

Positives: Narrow defeat to France is okay. Being in Group F means that even if they also lose to Portugal they will go into their final game against Hungary knowing exactly what they have to do to nab one of those pesky group-stage-spoiling best third-place spots.

Positives: It will soon be over.

Negatives: Played really quite well against the second-best team in their group but still ended up losing 3-0. Just the world champions next.