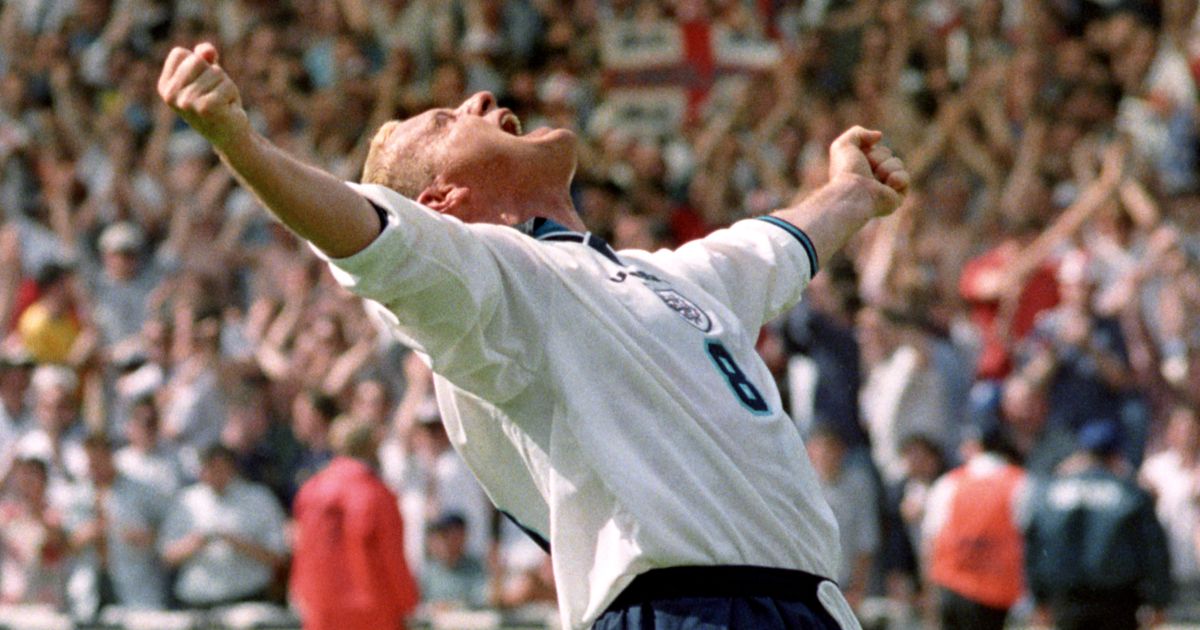 Italia 90? Actually sh*t. That Manchester United Treble side? Overrated. And this summer in particular it’s the turn of Euro 96, which you thought you enjoyed but it was actually sh*t and overrated.

Brian Reade joins the grumpy crew in the Daily Mirror as he bemoans the fact that ‘England couldn’t get past the semis despite playing at home’, which sounds pretty damning until you check that England went into the tournament 24th in the world rankings and their victors – Germany – were ranked second.

‘Bizarrely, Euro 96 and Paul Gascoigne’s goal remain high points in the history of a nation that views itself as one of the world’s footballing superpowers’.

How is it bizarre that the second best tournament performance by an English team is considered a high point? And who has decided that England ‘views itself as one of the world’s footballing superpowers’ because we literally know nobody who thinks that.

The lyrics to the Baddiel and Skinner song you hate are key here. ‘Everyone seems to know the score’ because England almost always fail. It is part of England’s football heritage. So forgive us if we get excited about almost reaching a final that one time.

‘Phil Foden has had his hair shaved and dyed to “bring a bit of Gazza” to the pitch and pundits are queuing up to say Stockport’s answer to the mercurial Geordie could be the key that unlocks Europe’s best defences this summer.’

Phil Foden did no such thing; we covered this on Wednesday. And what is the problem with ‘queuing up’ to be excited about an English footballer? Forgive us for a little giddiness, please.

‘No other major European country would hold an international career in which a player won nothing as a benchmark of excellence.’

At this point, we cannot fathom whether Reade is being wilfully obtuse as Paul Gascoigne is clearly not held up ‘as a benchmark of excellence’. He is merely a footballer that many of us enjoyed and we would quite like to see somebody in an England shirt play in a similar way. We would also quite like England to win a tournament; those things are hopefully not mutually exclusive.

‘The Germans, Italians, French and Spanish know success is not achieved by building a team around one individual who can sporadically “get fans off their seats”.’

Indeed they do. And what evidence are you citing that the English think differently? The views of Alan Hudson and Alan Hudson alone here do not count.

‘To win trophies a team has to be excellent in all positions and work as a unit.’

Indeed, Reade’s own newspaper – the Daily Mirror – did not even make Gascoigne the man of the match after that goal against Scotland.

It wasn’t all about Gascoigne then and it’s not all about Phil Foden or Jack Grealish now. Is it okay if we go back to thinking that we enjoyed Euro 96 then and might yet enjoy Euro 2020 now?

Beer we go
The back pages of the tabloids are dominated by England possibly playing with a back three against Croatia featuring Luke Shaw and Kyle Walker.

Are they f***. They’re actually dominated by Declan Rice saying he might try beer for the first time if England win Euro 2020.

Only middle-aged journalists would be so surprised and fascinated that a 22-year-old athlete does not drink beer.

And only Alan Brazil would then brand him a “liar”.

Promising headline of the day
‘What happened between Declan Rice and Mason Mount after Chelsea won the Champions League’ – Football London.

At this stage of working from home, anything less than ‘they f***ed’ is going to be one hell of a disappointment.

Sentence of the day
From The Sun’s piece on Gareth Southgate and his wife:

‘He even lifted the sex ban before games, as we saw the likes of Harry Maguire and Jordan Pickford cuddle up to their partners in the stands.’

Some women are clever!
Oh and by the way, Mail on Sunday, you can f*** off with this:

And you can join them, Evening Standard:

‘The end of the WAG pageantry isn’t just about social distancing, the next gen WAGs are a totally different tribe. They’ve swapped tequila for turmeric shots, and nightclubs for libraries.’

Not all women are clever!
And you can f*** off too, Mirror…

‘It’s that time of year again when we pour into beer gardens pretending to be interested in the footie just so we can check out what the WAGs are wearing.’

Recommended reading of the day
Joshua Law on the real Ronaldo