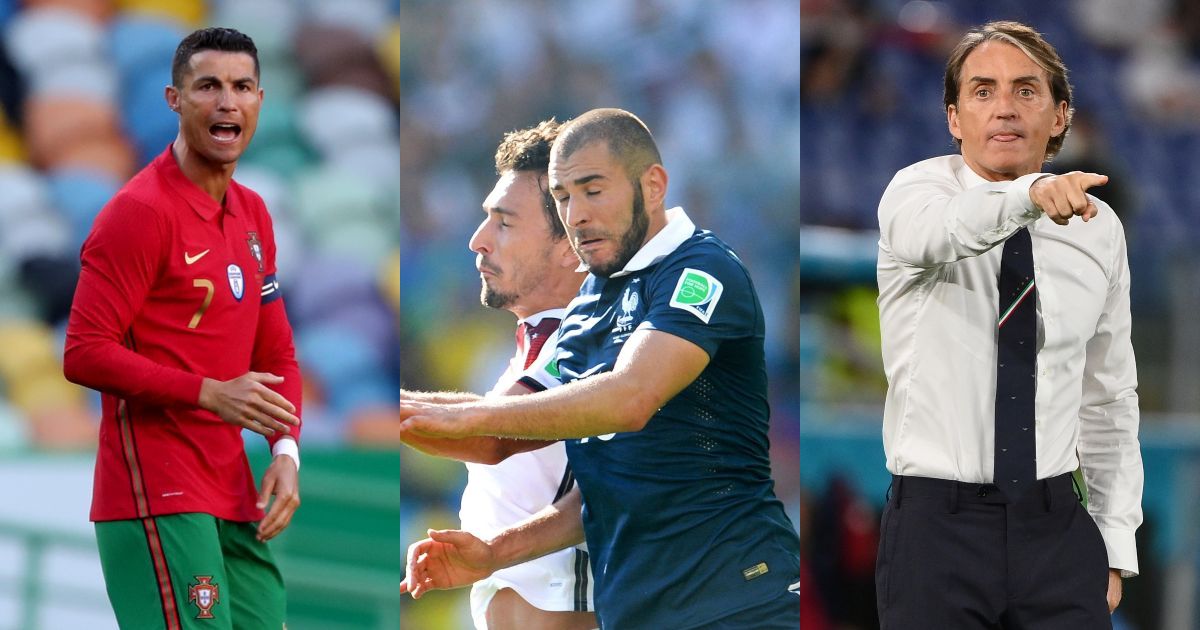 The Euros is now flying and we are loving it so far. And it only gets sexier on Tuesday with France v Germany…

You can choose to enjoy this great French side and witness how they cope with the pressure of being favourites or you can get comfortable with the initially uncomfortable feeling of supporting this German side as underdogs. Either way, it will be fun.

The last time Germany beat France was in the World Cup quarter-finals of 2014 and remarkably, the managers and likely nine of the players remain the same. For context, Raheem Sterling was the only England player who started (and starred) v Italy in 2014 and then Croatia in 2021. These are oddly familiar foes.

In theory, Germany’s three centre-backs should be pulled asunder by a French front three of Kylian Mbappe, Karim Benzema and Antoine Griezmann, but we also know that French teams can implode from the inside, with Mbappe and Olivier Giroud already going a little too public with their squabbles. We don’t yet know what the late addition of Benzema will do to the dynamic of this squad.

One thing we should also remember – and this is a gift for neutrals – is that that the France v Germany billing is misleading; this game will be held in Munich in front of 14,000 overwhelmingly German fans. This could be closer than the odds and the FIFA rankings suggest.

Team to watch – Denmark
Should they have played against Finland? We think not but what is unavoidable is that defeat to Finland puts them in a funky place in Group B. Should their Euro 2020 campaign be remembered for something other than the tragic events of Saturday night then they probably need something other than heavy defeat against Belgium, though the nature of this tournament means that three points against Russia in the final game may yet be enough.

Clearly they were in no fit state to recommence that game against Finland and it has become clear in the aftermath that they felt like they had little choice, but what we will discover on Thursday is whether they can use their collective shared experience as a positive against Belgium, for whom complacency might be a genuine problem.

The good news for the Danes is that prior to this understandable hiccup against Finland, they had lost to only one opponent since September 2018. The bad news? That opponent was Belgium. Twice. But Denmark will never again have the collective goodwill of the whole of Europe (bar Belgium) and never again may they be filled with such righteous anger and grief. We’re all Denmark, aren’t we?

Player to watch – Cristiano Ronaldo
This is probably not his last major tournament but it is surely his last Euros, though we really would not rule anything out; he will only be 39 and still have about 4% body fat in 2024. He will absolutely want to claim the tournament all-time top scorer record as his own, though his nine in 21 games should be a source of some embarrassment as he sits level with Michel Platini and his nine goals in five games at one single tournament. Basically, he’s sh*t.

Nonsense of course; he remains a phenomenal goalscorer and scored 11 goals in qualifying for this tournament, though that all feels a long time ago now. We expect him to take roughly 27 shots against Hungarian side who will likely be utterly petrified and in awe at this living legend.

We really should enjoy him on these massive stages – whether that means the actual football or the pantomime – because we might just miss him when he is gone.

Manager to watch – Roberto Mancini
Just the 28 games unbeaten now and a faultless performance against Turkey but this is where the hard brain work starts for Roberto Mancini. Does he risk splitting up his 70-year-old central defensive partnership with a view to getting through the entire tournament? How soon does he bring back Marco Verratti? Does his lopsided 4-3-3 work against every opposition? This is tournament management now and there are difficult decisions to make at every turn.

Mancini’s last silverware as manager was the 2013/14 Turkish Cup so it seemed faintly ludicrous when Italy appointed him as manager in 2018. But in the last three years he has made all his critics look ludicrous themselves because he has been nothing short of extraordinary in this role. Now he goes again, with the chance to lay down a marker with two wins from two games at Euro 2020. With that in the bag, perhaps his old men will get that well-earned rest.

Battle to watch – Mats Hummels v Karim Benzema
We make no apologies for going back to that France v Germany clash for a meeting between two old-stagers who played in that 2014 World Cup quarter-final. A year ago, neither would have remotely expected to be meeting again in the European Championship; much has been made of Benzema’s return after almost five years, but it’s worth remembering that Hummels was in exile for two years as Germany looked towards a future without most of that World Cup-winning squad.

Both are back and if this were club football we would talk about both being ‘like new signings’. Both may have lost a yard or two of pace but neither relied too much on that pace anyway. While eyes might be drawn towards Kylian Mbappe, take a second to appreciate a couple of 30-somethings just happy to be there.