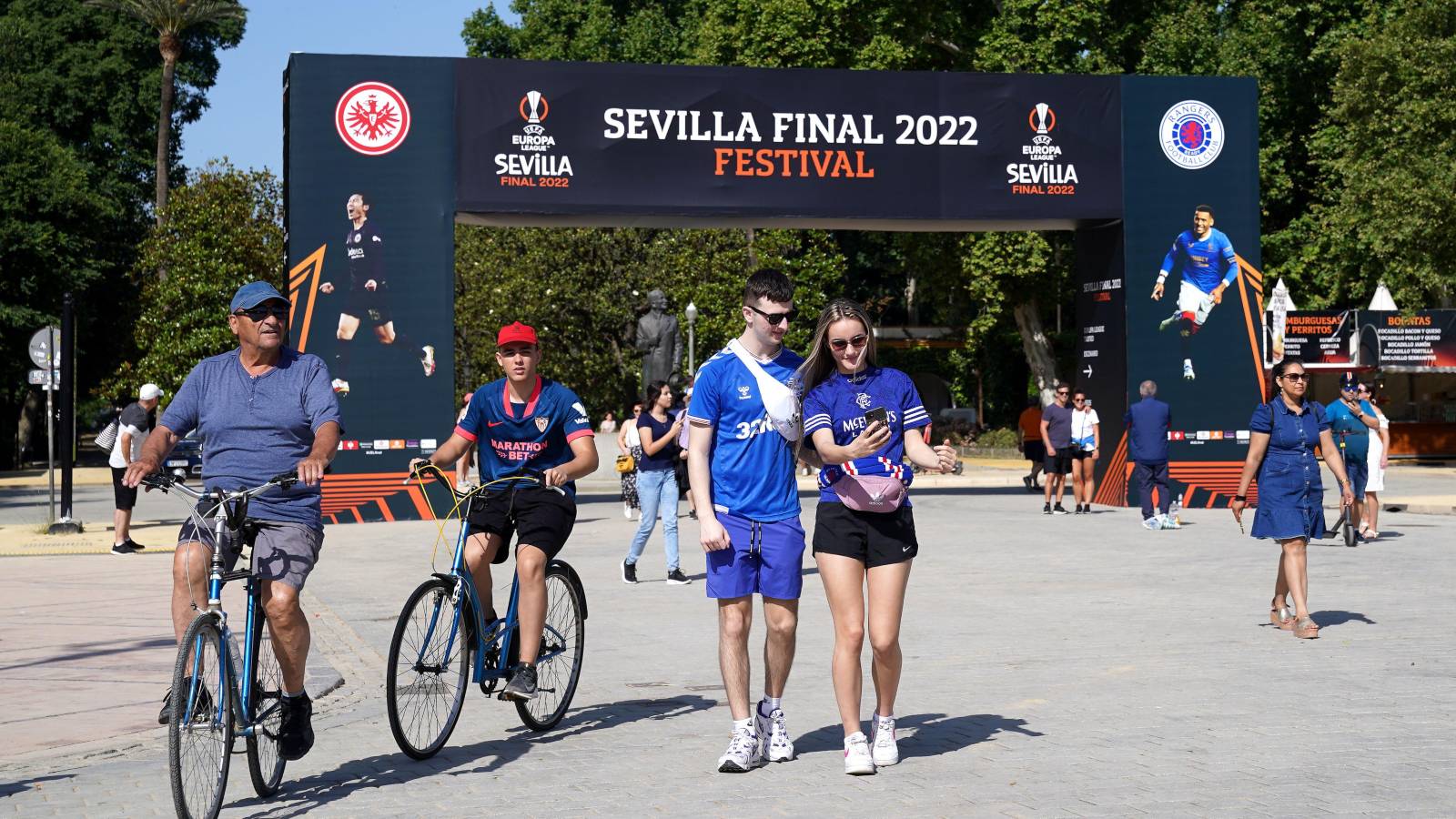 Tonight’s Europa League Cup final is bound to be a stirring affair and it’s one that has captured the imagination, with up to 150,000 fans of Rangers and Frankfurt in Seville and a capacity of only 43,000 at the Ramón Sánchez Pizjuán Stadium.

The Europa League has always been engaging for most European clubs; only in England was it ever sneered at and dismissed as some second-class trophy that was a mere distraction to the important business of pocketing free money in the Premier League.

So it was no surprise that the Europa Conference League’s introduction this campaign also received the curled lip sneer from those hypnotised Premier League advocates who would rather fight it out for a 12th-place finish than have to play clubs they’ve never heard of, from somewhere called Abroad.

Of course this small island mentality is rife in English society, not least in the ridiculous Westminster government which seems addicted to an entirely confected EU persecution complex of its own imagining, one that is causing significant economic, cultural and political damage. Given how many people voted for this deluded and dishonest bunch of intellectually undernourished frauds, we shouldn’t be surprised that European tournaments are thought by many to be second-rate, at least if large amounts of money are not on offer.

However, both the Europa League and Europa Conference League have been a fantastic success for those not too blinkered to see the truth. They have given competitive European football to a whole host of clubs that will never qualify for the Champions League. They add variety and interest to a season. They provide entertainment whose motivation isn’t ever more money. They feel more inclusive.

Here are tournaments with four teams in the finals who do not play in the Premier League. This is brilliant for those of us for whom a little bit of our soul dies every time a player, manager or pundit stridently declares the Premier League is the best in the world. These tournaments are at least a small bulwark against such witless propaganda, especially, in this case for Rangers.

As I have said many times, Scottish football is put down in England by people who don’t watch it. It isn’t even scouted by some top-flight clubs, so far beneath them do some consider it to be. Yet, not only is the entire Scottish pyramid tremendous entertainment, here we have a team in the final that beat the more fashionable Borussia Dortmund and RB Leipzig to get there, as ‘pub league’ teams always do, eh.

While people might argue about the formats, with up to three qualifying rounds and a play-off round before the league stages – I’m sure most would like both competitions to be straight knockout tournaments – even so, both have delivered good games and unexpected results.

Rangers v Frankfurt is a final between two teams that rarely win European finals – once in 50 years for Rangers, once in 42 for Frankfurt. Indeed, that’s what is great about both competitions; unlike the Champions League in most seasons, you don’t know who is going to get to the last four. Roma take on Feyenoord in the Conference final. Roma have not been in a final since the early 80s and have never even won a European title before, while Feyenoord last won the UEFA Cup in 2002 and 1974.

As the Champions League is tweaked to make it the European Super League lite, hardened around a shell of the continent’s richest clubs, it can get predictable, as largely the same teams make it to the knockout stages every season. No-one can say that about the other two European competitions.

Anything that offers great breadth and opportunity for the other 95% of clubs that exist in Europe is much to be welcomed. It’s not all about money, it’s not all about winning or getting to the final, it’s about taking part. Bodø/Glimt started in the second qualifying round of the Conference League and made it to the quarter-final, beating Celtic along the way. That’s a great adventure and is to be celebrated.

It’s a mistake to think that if you don’t get to the final or win it then it’s all been worthless. Clubs have different targets. For a team like Gibraltar’s Lincoln Red Imps to get to the Conference League group stage is a great achievement. Okay, they lost all their games and only scored twice once there, but that’s not the point. These journeys are all stories, are all history for fans and players to reflect on down the years. We all need a bit of romance to counterbalance the greed and commodification culture that dominates the higher echelons. In a very real way, the last brick at the summit of football’s pyramids is far less important than the first.

Personally, I love the feeling of unity on European nights, be it Tuesday, Wednesday or Thursday. All across this vast continent from the Arctic circle to the Mediterranean sea, clubs from different countries are playing football with clubs from other countries, all at the same time, from the smallest out-of-the-way team, to one with a long history of success. There is something wonderful in that, at least if you’re not a Eurosceptic, or indeed a Euroseptic, as my typo initially had it.

At a time of war in Europe, the Conference League and Europa League have been an illustration of the commonality of all our peoples. Those in charge are intent on sowing division and hatred. Don’t believe their lies. They are liars and they lie all the time, they’re lying now and now and now.

Let European football be our truth.