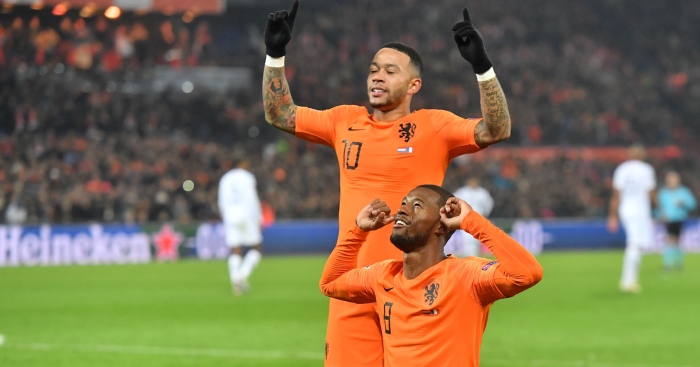 Germany’s relegation from the elite tier of countries in the Nations League was confirmed as France were beaten for the first time since winning the World Cup.

Die Mannschaft’s hopes of remaining in League A hinged first on France overcoming Holland in Rotterdam and then beating the Dutch in Gelsenkirchen on Monday.

Les Bleus, though, suffered their first defeat since being crowned world champions in Russia in the summer – and their first competitive loss since June 2017 – when Georginio Wijnaldum helped Holland to a 2-0 win at De Kuip.

The Liverpool midfielder coolly converted into the top corner after the ball had rebounded to him following Hugo Lloris’ save with his legs from Ryan Babel’s lashed strike.

Memphis Depay hit the post direct from a corner in the second half but slotted home from the penalty spot deep into time added-on after Frenkie de Jong was felled by Moussa Sissoko in the area.

Holland – who missed out on World Cup qualification – head to Germany on Monday knowing a draw or a win would see them leapfrog France and seal their place in the last four of the Nations League finals next June.

Germany, meanwhile, will drop down to League B having collected just one point from their three games so far.

Dumfries kept out by Lloris not once but twice. The full-back first sees his header saved then his follow-up shot.

Wales missed out on promotion to League A, with Denmark seizing the opportunity courtesy of a 2-1 win at the Cardiff City Stadium.

Beating Denmark would have seen Ryan Giggs’ men top Group B4 and book their spot at Euro 2020, but Denmark stole a march following strikes from Nicolai Jorgensen and Martin Braithwaite.

Gareth Bale pulled one back to set up a grandstand finale but the Danes held on, with their win guaranteeing relegation to League C for the Republic of Ireland.

Ukraine, who have already secured top spot in Group B1, suffered a 4-1 defeat in Slovakia.

Norway and Bulgaria are locked on 10 points ahead of the final Group C3 fixtures after respective 1-1 draws in Slovenia and Cyprus.

Gibraltar took the lead against Armenia but eventually succumbed to a 6-2 loss in Group D4, where FYR Macedonia remain top after defeating Liechtenstein 2-0.