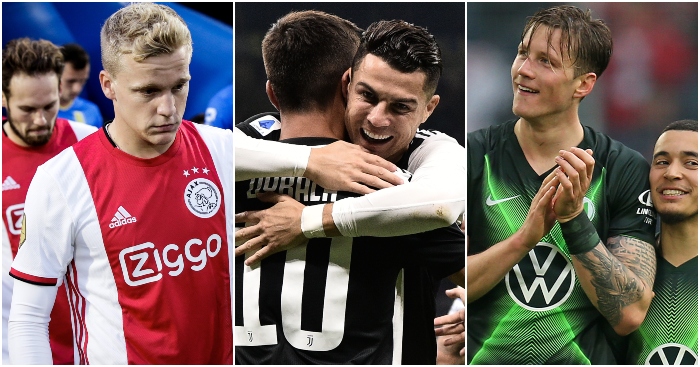 Liverpool are looking to retain their unbeaten record when they face Spurs later today. On the continent, there are five other teams in the top 10 leagues who are yet to be beaten. Including one newly-promoted minnow…

Erik ten Haag’s men have PSV breathing down their necks at the top of Eredivisie, with both sides having drawn twice. But PSV’s 3-0 defeat at Utrecht last week has given the champions a one-game cushion. That said, Ajax host Feyenoord on Sunday looking for a return to form. They suffered their first defeat of the season in any competition on Wednesday night when Chelsea beat last season’s semi-finalists in the Champions League, while last weekend’s 2-1 win at bottom side RKC Waalwijk was described by Daley Blind as “horribly bad”. He elaborated: “I think it was our worst match in the last two years. We were lucky to come away with the win. We weren’t well organised and we certainly didn’t play with any sharpness.”

It is clear that Juventus are still adapting to Maurizio Sarri’s methods but the Serie A champions are making a decent fist of the transition. They have yet to lose in any competition on Sarri’s watch, though of the 10 wins in 12 league and European matches, only one – a 2-0 home victory over drop-zone dwellers SPAL – has been by more than a single-goal margin. Inter are hot on their tails, just one point behind, but the 2-1 win over Antonio Conte’s side before the international break put the pretenders back in their box somewhat. Still, Sarri has been hired with the Champions League in mind and Juve’s best performances have come in Europe. The rejuvenating effect the new manager has had on players like Paulo Dybala, Gonzalo Higuain and Juan Cuadrado is also a feather in Sarri’s cap.

🏅💎 We have our first MVP of the season, @PauDybala_JR wins MVP of the Month for September, presented by @officialpes! 👏👏👏 pic.twitter.com/Dh8bFmqAPZ

Last year’s sixth-place finishers remain the only unbeaten Bundesliga side but that still isn’t enough for top spot in a hotly-contested table. Oliver Glasner’s new side share the summit with Borussia Monchengladbach, though Wolfsburg are edged into second on goal difference. Behind the two pacesetters, the entire top half of the 18-team table are lurking within two points, with Bayern, Dortmund and Leipzig having identical records. Though you could take a dim view of four draws, in each of those 1-1s, Wolfsburg have come from behind, thanks in no small part to striker Weghorst. The Dutchman, who bagged 17 last season, has scored or assisted in every Bundesliga game but one so far this term, including netting a late leveller against Leipzig last week.

The newly-promoted side have stunned Portugal by winning six of their opening matches and drawing the other to sit atop the Liga NOS table ahead of Benfica and Porto. So how have Famalicao, who went up as runners-up last season and play in front of fewer than 5,000 supporters, ascended to the top of the Portuguese league? Fairytale though it may be, Famalicao have plenty of funds behind them. The Quantum Pacific Group, which owns a third of Atletico Madrid, took a majority stake last season and, of course, the tale has Jorge Mendes’s paw prints all over it. Famalicao have took players on loan, with some from Wolves, Valencia and Atletico as well as Benfica, Porto and… Stoke. Still, Marco Silva’s former assistant Joao Pedro Sousa is doing a splendid job knitting the squad together. They have beaten Sporting Lisbon but their biggest test comes on Sunday away at Porto.

Last season’s runners-up in Belgium have kept seven clean sheets in the league so far this season which may come as a surprise to those who watched Simon Mingolet drop b*llock after b*llock in Liverpool’s goal. But Philippe Clement’s side have been in fine form at the other end too – Brugge’s eight wins have featured one, two, three, four, five and six-goal triumphs. Their biggest test so far ended in a 1-1 draw with reigning champions Genk – Clement’s former side – though they face another examination of their credentials this afternoon when they host Standard Liege, who are currently second and could go top should they inflict upon Brugge their first defeat of the season.