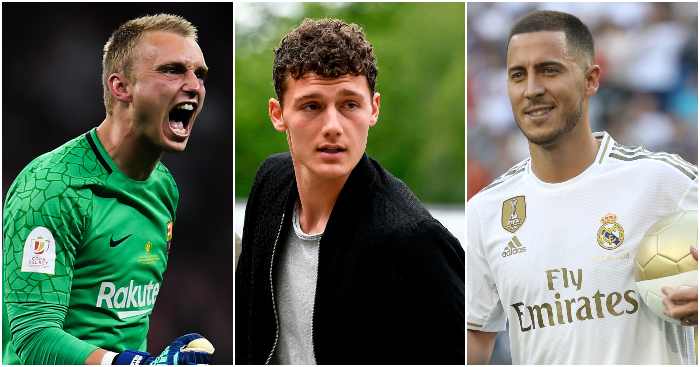 Not including players signed from Premier League, in a 4-2-3-1 formation…

GK: Jasper Cillessen (Valencia)
The Holland goalkeeper joined Valencia for £31.35million after spending three years in Marc-Andre ter Stegen’s shadow, becoming the second-most expensive player ever purchased by Los Che behind only Goncalo Guedes. Cillessen managed only five La Liga appearances in those three seasons but still takes a couple of La Liga title winner’s medals with him to the Mestalla. Neto, an ever-present in Valencia’s goal for the last two seasons, will move in the other direction for a similar fee but Cillessen’s deal will go through on June 30 – a day before Neto – which will allow Los Che to bank the cash in the current season’s books before returning it to Barca in next season’s. Take that, FFP.

RB: Benjamin Pavard (Bayern Munich)
Bayern got their transfer business started for the current window three weeks before the last one had shut. France right-back Pavard, one of the breakout stars of last summer’s World Cup and scorer of THAT goal against Argentina, inked a deal in January to take effect from July 1. The 22-year-old insisted there is more to his game than that sweet, sweet side volley: “I didn’t sign for Bayern just because of that one shot,” he said in April. “It’s because I’m one of the best defenders in the Bundesliga.” Screech got game.

Pavard's goal against Argentina has been voted the best at the World Cup. Could watch it all day #mmlove pic.twitter.com/EVA8uMdTMQ

CB: Lucas Hernandez (Bayern Munich)
Bayern were in a hurry to rebuild their defence. Before the conclusion of last season, amid a Bundesliga title fight, Niko Kovac had half a new rearguard in place for the next campaign when Hernandez was snapped up from Atletico in March. Not even a knee injury which the medical flagged up as requiring surgery was going to stop Bayern from making the versatile centre-back the most expensive player in the Bundesliga at £68million. But Bayern got half of their money back by shuffling Mats Hummels back off to Borussia Dortmund.

CB: Eder Militao (Real Madrid)
Real Madrid got Eder through the door in mid-March even before Bayern signed Hernandez. The 21-year-old defender became the first signing of Zinedine Zidane’s second reign but their haste was necessary. Real paid the £43.5million to activate Eder’s release clause, which was due to increase by 50 per cent upon the end of last season. The former Sao Paulo defender only joined Porto last August and had not yet completed a season in Portugal when Real came knocking.

LB: Ferland Mendy (Real Madrid)
It is quite something that at £47million, the new Real Madrid star is not even the most expensive French left-back named Mendy. But the former Lyon defender has had to scrap to get this far. After starting his youth career at PSG, aged 15, he spent a year away from the game and three months in a hip spica cast due to a hip injury. “I was in a wheelchair for a while and I spent between six and seven months in hospital doing rehabilitation so I could walk again,” Mendy said. “They told me I wasn’t going to play again. Now I’m at Real Madrid.” Go ‘ed, Ferland.

102 – @ferland_mendy completed 102 dribbles in his two @OL's seasons, more than any other defender in the Ligue 1 & the Top 5 European Leagues (after Arthur Masuaky & Joao Cancelo) in this period. Skilled pic.twitter.com/G3Z5lGhDQQ

CM: Frenkie De Jong (Barcelona)
Another deal that was completed long before last season had drawn to a close or the window had opened was De Jong’s £65million switch from Ajax to the Nou Camp. How good is the 22-year-old? “He is not a second Cruyff, but he really does have the essence of Cruyff. He is our big hope in dark days,” says De Telegraaf chief football correspondent Valentijn Driessen. Ex-Holland midfielder Arie Haan is similarly impressed: “You might laugh, but he is a better version of Franz Beckenbauer.” No pressure, Frenkie…

CM: Marcos Llorente (Atletico Madrid)
The central midfielder was one of the first through the Real Madrid exit door as they look to claw back some spending money, though Llorente didn’t have to go far, moving across town to Atletico for £35.6million. The 24-year-old follows in both his father and grandfather’s footsteps by representing both Madrid clubs – but it might have been different had Liverpool been interested. “I contacted several clubs to let them know what happened, the conversation that Zidane and Marcos had,” explained Julio Llorente, the player’s uncle and agent. “One of them was Liverpool, but Marcos’ position was covered and it wasn’t a priority.”

A red and white dynasty

AM: Kerem Demirbay (Bayer Leverkusen)
The central midfielder gets the nod in this XI in a more attacking position following his £28.2million move from Hoffenheim to Bayer Leverkusen. It has been a curious route to Leverkusen for the 25-year-old, who had spells with Schalke and Borussia Dortmund before making his senior debut for Hamburg. Prior to moving to Hoffenheim in 2016, Demirbay had loan spells at Kaiserslautern and Fortuna Dusseldorf, where he was made to referee a junior girls match – apparently in his best clobber – as punishment for telling female referee Bibiana Steinhaus that “women have no place in men’s football”.

RW: Eden Hazard  (Real Madrid)
The Chelsea star is currently the priciest purchase of the summer at £88million, though that could rise to around £150million if Hazard tears it up at the Bernabeu. Neymar and Paul Pogba would love to relegate the Belgium star from his current perch but that would depend on any club being able to afford either of the barely-arsed stars. Hazard’s deal, and the other Real ones mentioned, may mean that Zidane will have to look for cheaper alternatives to Pogba, keeping him out of this XI, unless the Spaniards can shift some deadwood.

LW: Rodrygo Goes  (Real Madrid)
The Brazilian winger was lined up by Real a year and three managers ago, with Santos receiving around £40million for the teenager having been allowed to keep him for one final season. But Santos coach Jorge Sampaoli has a warning for anyone expecting the youngster to make an immediate impact at Real. “Rodrygo is going to one of the best teams in the world at a very young age and there will be a very big contrast when he arrives at Real Madrid as he will share a dressing room with players who are very successful and who are icons in Europe,” the former Argentina coach said. “At the beginning, it will be very difficult for him but he has the potential.”

CF: Luka Jovic  (Real Madrid)
“Now I’m the happiest kid in the world having signed a contract with the biggest club,” said Jovic after completing his second transfer of the summer. The Serbia forward was acquired by Eintracht Frankfurt from Benfica after a stunning season on loan in Germany where he scored 25 goals. The 21-year-old cost Eintracht £7.15million, a few weeks before they sold him on to Real Madrid for £57.7million. Benfica will pocket £10.5million while Jovic will receive the necessary stage to fulfil Red Star general director Zvezdan Terzic’s prediction four years ago that the Bosnia-born hitman “will become the best striker in Europe”.