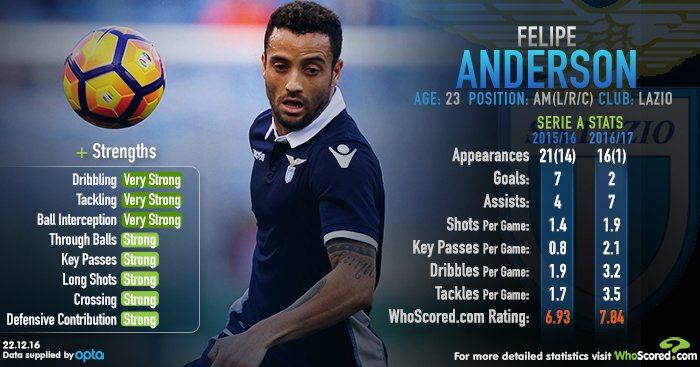 The halfway point of the season is upon us, and so it is as good a time as any to take a closer look at who has stepped up their game. Some players struggled to make an impact last season, but have improved to a great degree so far this campaign. Here, WhoScored.com take a closer look at those who have stepped up their game from last season in Europe’s top five leagues.

To qualify for this list, a player must have made 15 or more league appearances last season and five or more appearances this season.

10. Timo Werner – RB Leipzig (WhoScored.com rating increase of 0.79)
Timo Werner was arguably a standout performer for VfB Stuttgart last season and it was little shock to see a Bundesliga side go in for the 20-year-old when their relegation was confirmed. RB Leipzig are the fortunate beneficiaries of the youngster’s fine form this season, with his nine league goals the fourth best in the German top flight, already more than he managed last term (six). He’s led the line with aplomb, with his conversion rate improving significantly from 9.4% last season to 25% this season.

9. Mateo Kovacic – Real Madrid (+0.79)
Mateo Kovacic must have been aware that breaking into the Real Madrid starting XI would be easier said than done following his move from Inter Milan to Spain. Luka Modric and Toni Kroos are undoubted stars, while Isco, James Rodriguez and Casemiro battle to feature alongside the duo. In the absence of the former pair of that trio, however, Kovacic stepped up to the challenge. His pass-success rate (91.2%) is the fifth best in La Liga this season, while his interceptions (1.2 to 1.6) and dribbles per 90 (1.7 to 2.6) are both up from last season, contributing to a rise in WhoScored rating from 6.50 to 7.29.

8. Ji Dong-won – Augsburg (+0.82)
Last season was one to forget for Ji Dong-won as the striker failed to hit the back of the net for Augsburg. Playing a bit-part role for the Bundesliga side hardly helped him build consistency and confidence, but since establishing himself as the club’s lead frontman, the South Korean’s form has improved. His shots per 90 have increased from 1.5 to 2.2 and this is clearly having a positive effect on his output, with Ji netting three times in Germany’s top tier this term.

7. Iago Falque – Torino (+0.86)
Iago Falque struggled to land a regular starting spot last season, but he has since excelled with frequent game time. Roma opted to cash in on the Spanish winger and it’s Torino who are profiting from his fine form. After two goals and two assists for the Rome side last term, Falque already has eight goals and three assists to his name in Serie A this season. His number of key passes per game has almost doubled from 0.9 to 1.7.

6. Pablo Piatti – Espanyol (+0.88)
Like Falque, Piatti failed to earn a first-team place for his former side, but is now one of Espanyol’s most important players following his switch from Valencia. His WhoScored rating (7.24) is better than any of his teammates this term, with a fine return of five goals and seven assists – the latter the joint-highest of all players in La Liga this season – as the Argentine thrives under Quique Sanchez Flores. Given the chance to prove his worth, it’s little shock to see the number of key passes per 90 increase from 1.1 to 1.6.

5. Felipe Anderson – Lazio (+0.91)
After a stunning breakthrough campaign in the 2014/15 season, Felipe Anderson went off the boil last term before a return to his best form. The 23-year-old has won the joint-most WhoScored.com man of the match awards (six) in Serie A this season, while his WhoScored.com rating (7.84) is the second best in Italy’s top tier. There has been a vast increase in his number of tackles per game (1.7 to 3.5), while there’s also been an improvement in key passes (0.8 to 2.1) and dribbles per game (1.9 to 3.2), not to mention clear-cut chances created increasing from three to 10.

4. Florian Thauvin – Marseille (+0.93)
The hot-headed wideman was a disappointment for Newcastle and struggled to replicate his best form for Marseille following his return to the south of France this time last year. However, the 23-year-old now looks back to his best, ranking third for the most successful dribbles (52) and second for man of the match awards (four) in Ligue 1 this season. Remember when he really was not very good for Newcastle?

3. Eden Hazard – Chelsea (+0.94)
Chelsea’s turnaround under Antonio Conte has been really quite remarkable. A 12-match winning run sees them comfortably top the Premier League table, with the Blues now firm title favourites. Their ascent has been in no small part down to Eden Hazard’s return to his best form. A WhoScored rating of 8.05 is better than any other Premier League player this season, and is a 0.94 increase from last season (7.11). He’s already scored more league goals this term (nine) than last (four), while dribbles per game have increased significantly from 2.9 to 4.9.

2. Allan Saint-Maximin – Bastia (+0.96)
Bastia took full advantage of Hannover 96’s relegation to secure the services of Allan Saint-Maximin and the Ligue 1 side are profiting. Seventy-five successful dribbles is better than any other player in France’s top tier, with two goals and two assists contributing to a WhoScored.com rating of 7.22. The teenager is also making more key passes (1.6 compared to 1) and having more shots per 90 (2.6 to 1.5) with his rating increasing a notable 0.96 from last season.

1. Edin Dzeko – Roma (+1.02)
Edin Dzeko mustered just eight league goals for Roma last season and such a paltry return could’ve convinced the side that making his loan deal permanent was the wrong decsion. However, the Serie A side stuck by the Bosnian and they are all the better for it. Only Mauro Icardi (14) has scored more goals than the 30-year-old (13) in the top-flight of Italian football this season, while his WhoScored.com rating has increased an astonishing 1.02, the best in Europe’s top five leagues, with his current rating (7.88) better than any other player. He’s chancing his luck more frequently, with shots per game increasing from 2.7 to 4.9, and it’s evidently having a positive effect for both himself and the team.