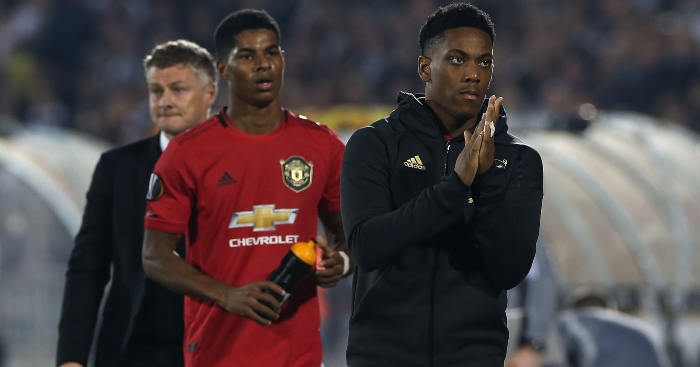 “Go and get Harry Kane from Spurs. Easy, just go and get him. He’d score 20 goals a season for you with his eyes closed.”

That was Roy Keane’s advice for Ole Gunnar Solskjaer over how to solve Manchester United’s goalscoring woes. But the former skipper didn’t offer a prediction for Kane’s haul with his hands tied behind his back and his shoelaces knotted together. Which must be how it sometimes feels to play as a centre-forward in this United team.

Solskjaer watched his side end their horrific run of form on the road with a 1-0 win over Partizan Belgrade on Thursday night, bringing to a close an 11-game winless streak away from Old Trafford which started back in March. The Red Devils boss will have taken that before kick-off. The wait for a shot on target in open play, however, must go on. It’s been 206 minutes now…

Ed Woodward could have airdropped Kane into United’s attack in Belgrade, but his presence would have made little difference to a United side devoid of imagination. Solskjaer spoke last night of his appreciation for the England captain, saying: “I have to say I like someone who can finish half a chance.” Creating even that seems beyond United at the moment.

As United’s starting centre-forward, Martial will shoulder much of the blame for that tonight, just as Marcus Rashford has for the last two months. Martial’s stature has been enhanced just by his absence in recent weeks while United have toiled in attack. Indeed, Solskjaer insisted: “Getting Anthony back is going to be a massive boost.”

But Martial displayed all the rust one might expect of the infuriatingly inconsistent 23-year-old upon his return from injury. In his hour on the cabbage-patch pitch, Martial struggled to keep his feet, let alone the ball. If Rashford cannot play as a centre-forward because he is uncomfortable receiving possession with his back to goal, it is hard to build a case for why Martial would fair any better.

But Martial, like Rashford, is entitled to look back at those facing him and ask just what he is expected to do with such scarcity of service. Solskjaer started with three at the back, with Juan Mata and Jesse Lingard tasked with creating space and opportunities for Martial. As we have come to expect from both, Mata could not get beyond the fringes of the game, while Lingard too failed to have any impact, aside from a low shot against the Partizan post after a loose ball dropped his way on the edge of the box.

Lingard finished the game at centre-forward in what we can only presume was another not-so-subtle hint by Solskjaer in the direction of Woodward. Rashford and Daniel James offered more of a threat, but United cannot rely every week only on their counter-attacking pace in the same way they approached Liverpool’s visit on Sunday.

Scott McTominay was the most persistent United threat in the opening hour, while Solskjaer’s wing-backs remained tentative. On the one occasion Williams burst forward, he won the decisive penalty. That’s not a coincidence, Ole.

"We got a result, but the performance wasn't what we hoped for."

"Brandon Williams was absolutely exceptional, man of the match for me."

Williams and James Garner were two of the few positives for United on a night even their defence looked shaky, especially when it took the shape of a three. Right-footed left-back Williams has seized his opportunity in the first-team and the fearless 19-year-old could be a genuine threat to Luke Shaw, whenever he might be available. And whenever that may be, history tells us that another absence is just around the corner.

Williams earned his first start against AZ Alkmaar and tonight it was the turn of James Garner to make his senior bow. The midfielder, a possible heir to Michael Carrick’s throne in front of the United defence, sat in front of the back three but struggled to get on the ball, with Partizan unwilling to let him get faced up to their goal. On the rare occasion he did, when he looked up, no team-mate gave him the opportunity to pass forward. Side to side it went, as it so often does with United.

United have a decision to make over Williams and Garner. The pair were probably earmarked for loan moves in January, but both could get plenty of action at Old Trafford. If Fred and Nemanja Matic are the alternatives, what is the harm in giving Garner an extended run of games?

But more pressing for Solskjaer is the matter of the Red Devils’ goalscoring misery. A centre-forward worthy of the title would help, but even Kane and Robert Lewandowski would struggle to flourish in United’s creativity void.