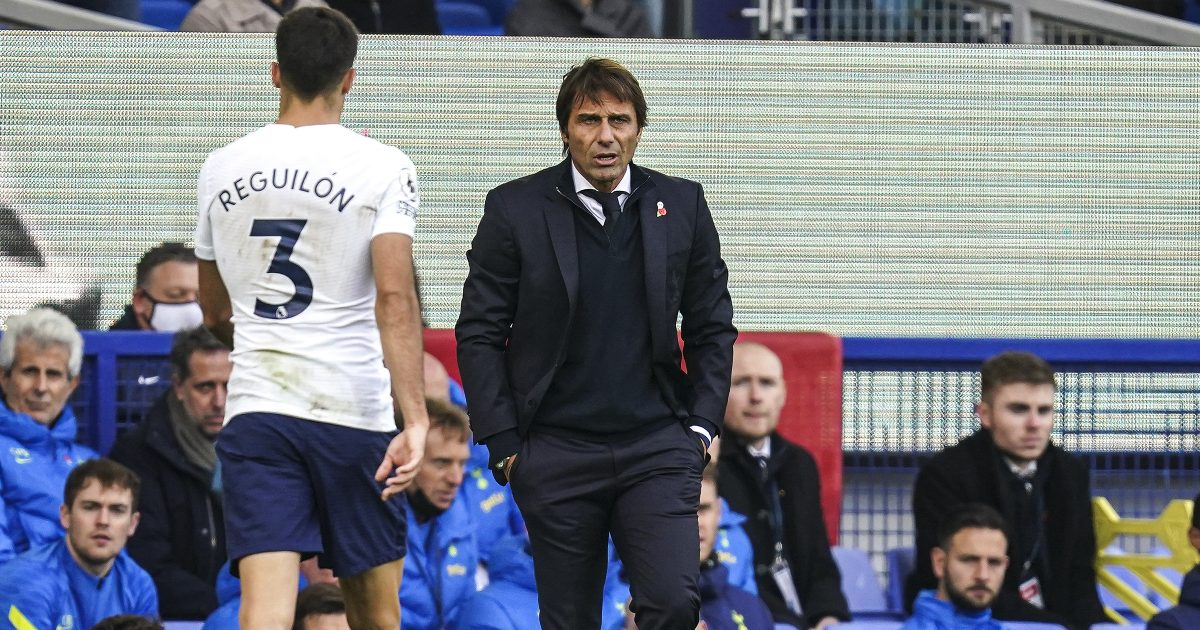 A dull affair at Goodison Park finished goalless as Everton shared the points with Antonio Conte’s Tottenham Hotspur on Sunday.

Conte picked the same team that beat Vitesse 3-2 in midweek in the Europa Conference League to face Everton.

The Toffees were the better side as the Premier League rivals were made to settle for a point apiece.

Spurs have now gone three hours and 47 minutes without registering a shot on target in the league, which undoubtedly helped Rafael Benitez’s fragile team grow in confidence.

Although the better side, Everton, who had a penalty award overturned by VAR and substitute Mason Holgate sent off in the 90th minute, just eight minutes after coming on, only had two attempts on target themselves.

Nevertheless, Benitez will have been delighted to have stopped the rot heading into the international break, which will give him some breathing space in which to get some of his injured players back.

The performance also restored supporters’ faith after witnessing some abject displays over the last month.

Benitez’s decision to hand Fabian Delph his first start since December was pretty much forced upon him due to injuries and Jean Philippe-Gbamin’s woeful 45 minutes in Monday’s defeat at Wolves.

But it made Everton better. Inside the first 20 seconds he had set the tone by snapping into a tackle on Harry Kane – it may have been a foul but it sent out a strong message after the insipid showing at Molineux and his team-mates took the hint.

But the former England midfielder has plenty more strings to his bow and his organisational skills and reading of the game helped form a more co-ordinated midfield which fluctuated from a three to a four as Tottenham worked their way back following their hosts’ positive start.

However, the meeting of two under-achieving sides, Everton having more of an excuse with key players Dominic Calvert-Lewin, Abdoulaye Doucoure, Andre Gomes and Yerry Mina out injured, produced an underwhelming first half.

There was more intensity from Conte in his technical area than his players, however, as Everton started brightly, but the match did not really come to life until after the interval.

Twice early in the second half Conte turned his back on the pitch in disgust as his players once again failed to follow his plan and the most commonly seen sight was of the Italian, arms outstretched questioningly.

Delph, meanwhile, was seeing everything and when left-back Lucas Digne charged forward the former Aston Villa and Manchester City man dropped back to cut out a through-ball which would have sent Lucas Moura racing clear.

With only 52 minutes’ action this season he was replaced on the hour, and almost immediately Richarlison thought he had won a penalty when he was brought down by goalkeeper Hugo Lloris.

However, referee Chris Kavanagh was advised by VAR to check the monitor and he overturned his original decision.

The home fans were incensed but that in itself was a positive as the Goodison Park crowd, and by extension their team, are often at their best when they have a perceived injustice to rail against.

Cristian Romero’s diving block denied Demarai Gray, while Richarlison’s control let him down as he got behind the Spurs backline from Allan’s chip as Benitez’s side continued to play better in the final third.

Conte’s arm-waving was akin to an angry traffic policeman as he pointed first forwards and then backwards, but it had little effect with Gray steering another shot wide.

Substitute Giovani Lo Celso came closest to making a dramatic impact when he beat Jordan Pickford but not the post in the 88th minute.

Holgate was then dismissed after Kavanagh changed his decision on a yellow card for an unnecessary over-the-top tackle on Pierre-Emile Hojberg.