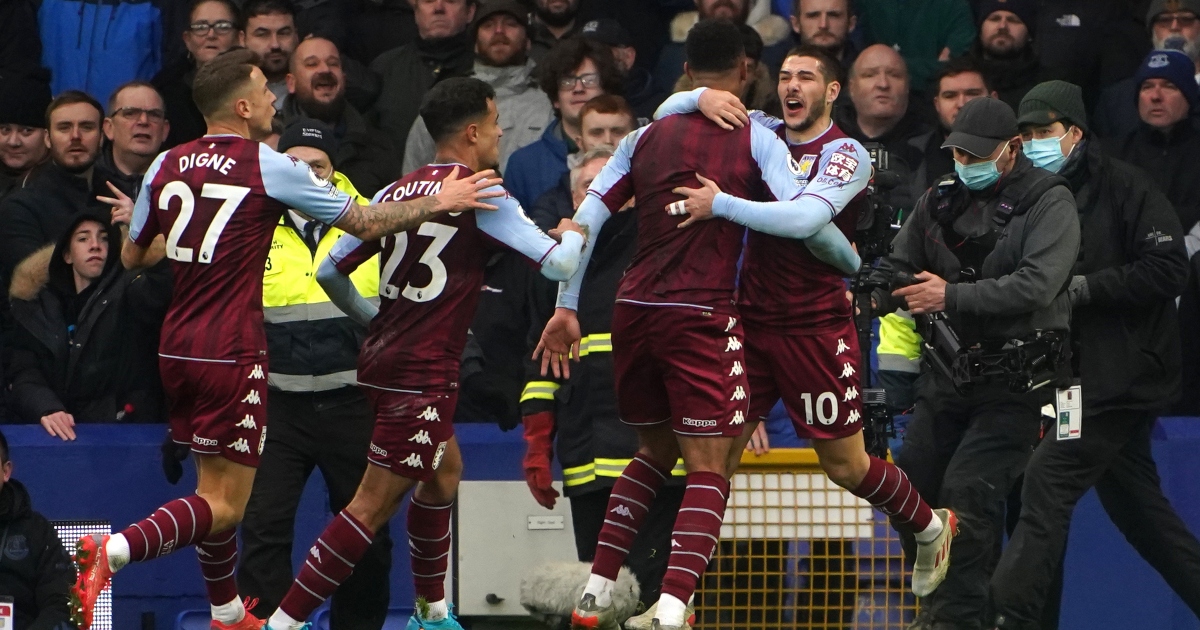 Former Liverpool captain Steven Gerrard’s first appearance at Goodison Park as head coach barely featured as a sub-plot with the focus all on Duncan Ferguson taking charge following the sacking of Rafael Benitez.

But, like many occasions during his playing career, it was Gerrard who left the ground smiling after Buendia’s match-winning header in first-half stoppage time.

The Villa boss was less happy about the incident which saw Matty Cash and former Everton defender Lucas Digne both floored by a full bottle thrown from the crowd which will probably result in punishment.

Ferguson promised changes after previous failings and delivered five of them, replacing three of the back four from last weekend’s defeat at Norwich which accounted for Benitez.

He did have the luxury, one barely afforded his predecessor, of starting Dominic Calvert-Lewin and Richarlison together for the first time since August in a front pair of a 4-4-2 but even that could not end a run which is now one win in 14 league matches.

The absence from the squad of January signings Vitalii Mykolenko and Nathan Patterson appeared pertinent.

On his last outing in temporary charge the Scot immediately got the fans on-side and this time around it was no different, with the first drink in pubs around the ground being served free courtesy of Ferguson’s generosity.

The feeling was reciprocated when he appeared on the touchline – though the same could not be said for the club’s hierarchy with a banner directed at chairman Bill Kenwright flown overhead before kick-off stating “22 years of failure, Bill. Time to go”.

Gerrard was predictably booed when he appeared, as was Digne’s early touches having left Goodison just a couple of weeks ago after a fall-out with Benitez.

Ferguson, who in his first spell as caretaker two years ago won his opening game against Chelsea, had promised more intensity from his players and they delivered on that front, with Jacob Ramsey’s ripped shirt an indication of how much more combative the hosts were under his instruction.

However, there was not much of an improvement in the football with Everton’s best two players this season Demarai Gray and Andros Townsend – both Benitez signings – isolated as wingers.

Villa created all the threat, with Buendia forcing Pickford into a low save early on.

One of the complaints Benitez had was over the number of costly individual errors and Everton shot themselves in the foot again when Digne slipped in the centre-circle to present Abdoulaye Doucoure and Richarlison with a two-on-one only for the former to woefully overhit his pass.

Pickford was over-employed, denying Watkins twice, although his brilliant save from a header counted for little as the offside flag went up, and Philippe Coutinho.

Pressure was building and the hosts finally cracked with the last action of the half when Digne, in one instant providing more assists for his new club than he had for Everton this season, whipped in a corner for Buendia to flick a header over Townsend on the goalline.

As the Villa players celebrated down by the corner flag Digne and Cash were hit with a full bottle, prompting a delay to the restart.

A public address announcement early in the second half that anyone throwing bottles would be arrested and banned was somewhat pointless, while television pundit Jermaine Jenas said the game was “going back to the dark ages of football”.

Ferguson sent on Allan and Anthony Gordon with the latter crossing for Richarlison to nod over and Calvert-Lewin to balloon an effort into the Gwladys Street End either side of Ben Godfrey’s header being cleared off the line by Tyrone Mings.

Everton’s aerial threat continued to increase with captain-for-the-day Yerry Mina twice missing the target with headers but, on the 115th anniversary of Everton’s great goalscorer Dixie Dean’s birth, the home side registering just one shot on target seemed like an affront.