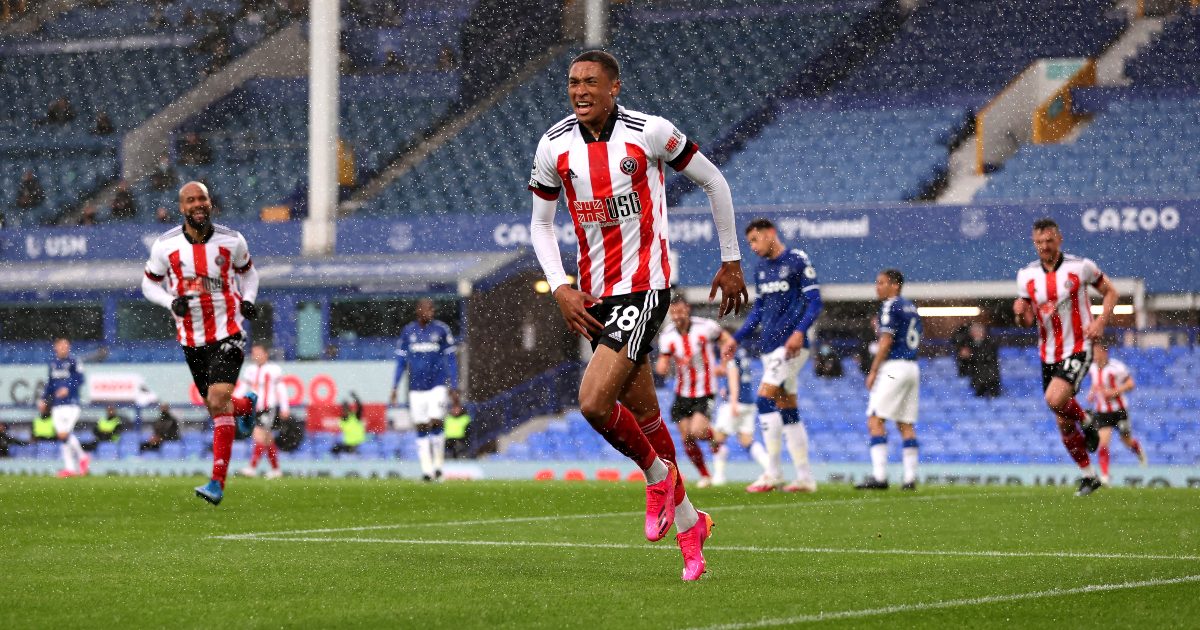 The Canadian-born forward, aged 17 years and 309 days, became the competition’s youngest scorer on his full debut and it is doubtful whether he will find the net with an easier chance than that he converted here against a static home defence in the 1-0 victory.

Earlier this season Jebbison was on loan at Vanarama National League North side Chorley and only got his first taste of first-team football with the Blades as a 65th-minute substitute last weekend.

But his goal was enough to consign Carlo Ancelotti’s side to a ninth home defeat, equalling their worst record from 1950-51 and 1993-94, with one match still to come at Goodison against Wolves on Wednesday.

Defeat almost certainly ended their chances of European football as they remain eighth, three points behind Tottenham and West Ham with a vastly inferior goal difference.

Since Christmas Everton have lost at home to the likes of Newcastle, Fulham, Burnley but losing to an already-relegated Sheffield United, whose second away win of the campaign still left them 18 points behind 17th-placed Brighton, was a new low.

Securing just two wins from the last 10 league matches tells its own story for Everton as even the returning James Rodriguez, eventually replaced 12 minutes from time, failed to spark a response.

Jebbison did not take long to make his mark, although the ease in which he was allowed to score will have surprised him.

With Enda Stevens seemingly penned in on the visitors’ left, the ball was worked to Jack Robinson via Ben Osborn and the former Liverpool left-back casually skipped past Richarlison and Michael Keane before driving a low cross to the far post when the unmarked Jebbison slid in.

He is the youngest player to score a Premier League goal since Raheem Sterling for Liverpool against Reading in 2012.

With his confidence boosted the teenager, who joined the Blades academy in 2019 after his family relocated to England, attempted a cocky dink over Jordan Pickford after Mason Holgate’s woeful backpass but the England goalkeeper was savvy enough to stand up and saved.

Aaron Ramsdale enjoyed more gainful employment at the other end as, having saved Allan’s early outside-of-the-foot shot, he produced a brilliant close-range double save from Richarlison’s diving header and Dominic Calvert-Lewin’s rebound.

In between those two attempts Seamus Coleman felt he should have had a penalty when his attempted flick hit Robinson’s hand.

Everton’s record the previous 32 times, dating back to 2015, they were losing 1-0 at half-time has seen 25 defeats and no victories and even a change of personnel and formation, forward Gylfi Sigurdsson replacing Holgate, one of the three central defenders, made little difference.

United’s David McGoldrick had the best chance of the half as the hosts continued to look devoid of ideas and drive.

Goodison hosts its final match of the season in three days and, despite the long wait to see live football again, on the evidence of this performance it could be an awkward evening in front of the 6,500 supporters who won tickets in a ballot.