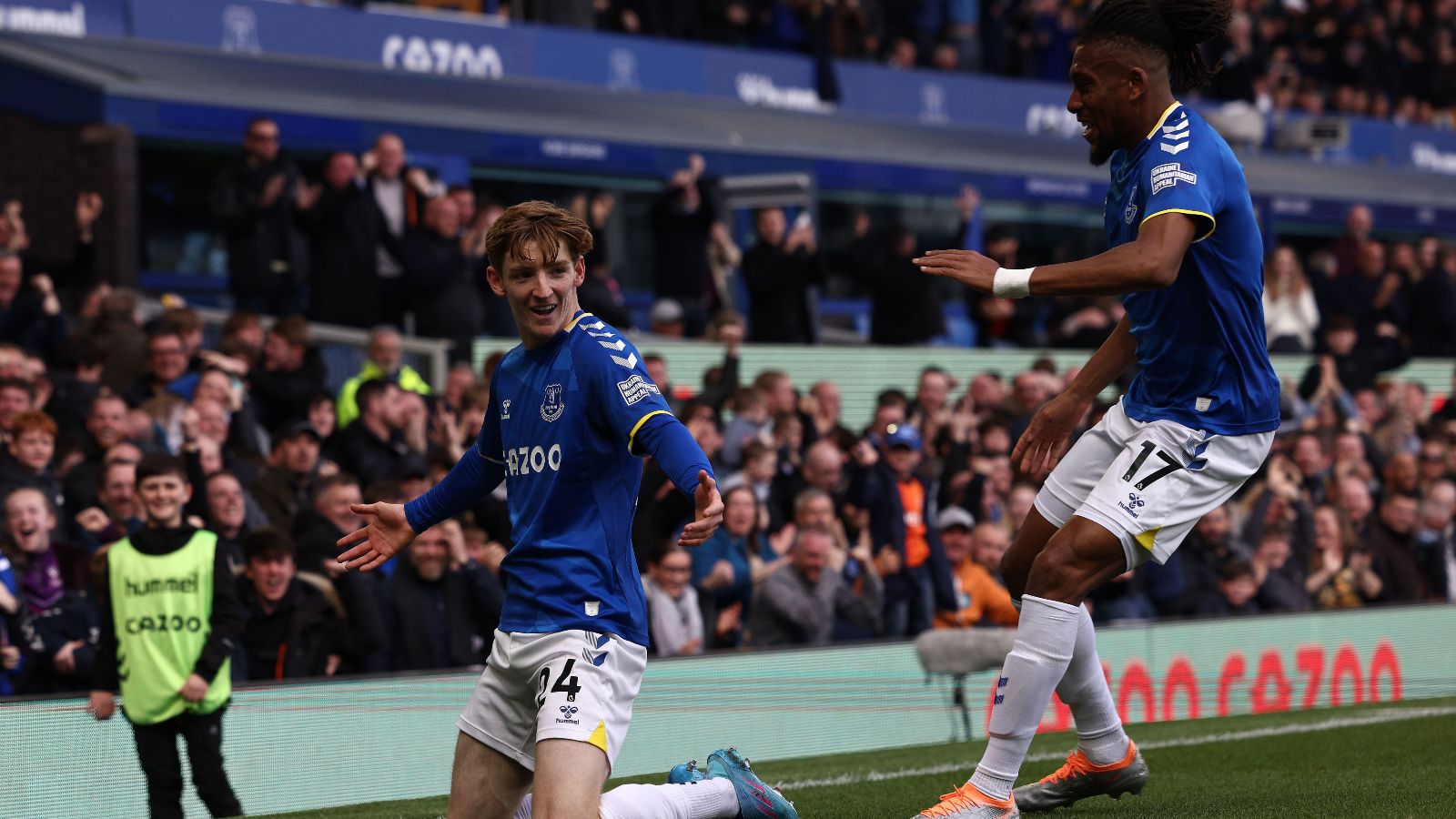 Anthony Gordon’s deflected goal before the interval was enough for all three points for Everton at Goodison Park against Man Utd.

Gordon was able to alleviate the pressure that was on Everton after their 3-2 loss against Burnley on Wednesday.

Neither side were at their best but Everton did enough to move four points clear of the bottom three.

Ralf Rangnick made half a dozen changes from the side that drew 1-1 against Leicester last week – Lampard himself made four – as Cristiano Ronaldo and Marcus Rashford were restored to the starting XI.

The bustling Rashford was thwarted twice early on by Jordan Pickford but Ronaldo was largely subdued as United remain cut adrift from the Champions League places after being downed by Gordon’s shot, which thudded into visiting captain Harry Maguire and left goalkeeper David De Gea stranded.

Everton, up until that point, were lacking in inspiration but they noticeably grew in stature after going ahead, when the mood around Goodison Park dramatically changed, although they were given relatively few scares by a United side that have won just one of their last five top-flight fixtures.

Given both teams are low on confidence, it was perhaps little surprise that it was a cagey opening few minutes, complete with stray passes and the sides loose in possession, although Everton were particularly hesitant, with United getting on top and having two early sights at goal through Rashford.

The hitherto out-of-form forward was lively on the left and had a snap shot parried away by the outstretched Pickford, who moments later excellently got down low to deny a header from the England forward as Gordon snuffed out any danger on the rebound.

Everton appeared listless and lethargic, with their fans growing restless, but the atmosphere and momentum changed as they took a 27th-minute lead following some sluggishness at the back from United.

Richarlison’s attempted cutback to Alex Iwobi broke just outside the area for Gordon, who prioritised placement over power and was grateful for a wicked deflection off Maguire, wrongfooting De Gea, as the ball sailed into the net.

The goal galvanised Everton, with Michael Keane heading over shortly afterwards while another deflected effort, this time from Richarlison, had to be tipped over by De Gea.

United were forced into a change before the break, with Fred seemingly nursing an injury and withdrawn for Paul Pogba, whose first meaningful contribution saw him upend Gordon on halfway to go into the referee’s book after the interval.

Moments earlier Rashford had ghosted in behind the Everton defence and while he was unable to make contact with Bruno Fernandes’ pass, the ball only just trickled wide with Pickford out of position.

It was to be Rashford’s last involvement as he and Nemanja Matic were hooked for Anthony Elanga and Juan Mata, with Ralf Rangnick using all three of his substitutes within 64 minutes.

United gradually started to exert pressure in the closing stages, with Everton throwing bodies in the way when the ball was worked into the box, although Pogba forced a smart save from Pickford late on.

Pickford was again called upon in time added on to deny Ronaldo on the half-volley after being teed up by Maguire before the referee’s whistle for full-time was greeted by an eruption of noise.

Lampard pumped his fist on the touchline, and no doubt breathed a sigh of relief, following a momentous win – just the third in his tenure in the league in 10 attempts.