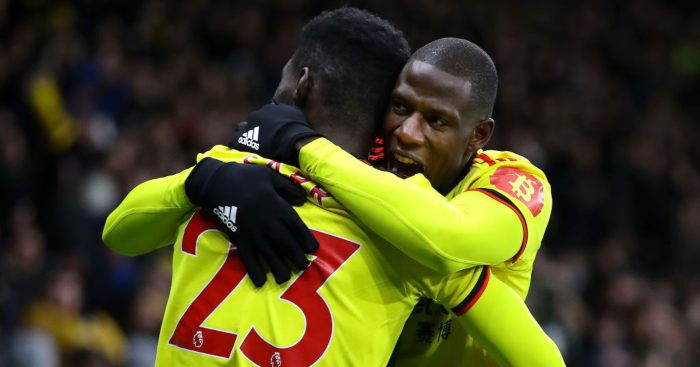 Everton have agreed a fee with Watford as they look to sign Abdoulaye Doucoure this summer, according to reports.

Earlier in the week the Evening Standard had claimed that the Watford midfielder could be leaving England with Monaco said to be interested in the 27-year-old after Everton were rebuffed by the Hornets.

However, the BBC confirmed on Wednesday evening that Watford had accepted a bid from Everton, which could be ‘worth up to £25m’.

The Toffees and the Hornets ‘reached a successful conclusion on Wednesday afternoon’ and ‘will have a medical before signing a four-year contract’ at Goodison Park.

Everton wanted to bring Doucoure to Merseyside last summer but the Hornets weren’t willing to sell at the time. Carlo Ancelotti has now ‘rekindled’ their interest.

As well as Doucoure, Everton are closing in on two more signings with Real Madrid attacker James Rodriguez and Napoli midfielder Allan set to move to the Toffees.

They are hopeful of confirming a £20m deal for Rodriguez before the end of the week with the Colombian set for a medical on Thursday.

Everton have also agreed a £25m fee for Allan with both imminent signings having worked under Ancelotti previously.