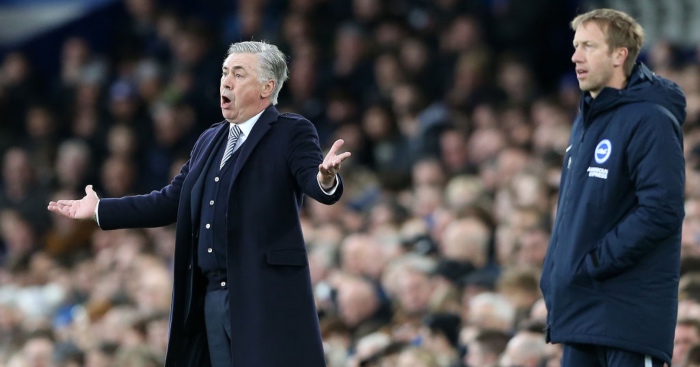 Former Everton boss Sam Allardyce claims Carlo Ancelotti only needs to add “two or three quality players” to his squad in the summer.

They are now seventh in the table and harbour hopes of qualifying for the Europa League.

Allardyce believes Ancelotti will want to recruit at centre-back and in midfield, but insists the club must focus on quality, rather than making more average signings.

“I think midfield he would want to strengthen, central defender as well,” Allardyce said on BT Sport.

“If he gets the right players that will only make them better and that sometimes only needs to be two or three quality players. Not six or seven.”

OPINION: The famous five: Which mid-season appointment has done best

Dominic Calvert-Lewin and Richarlison have formed a fine partnership up front under Ancelotti.

And Allardyce says the form of his forwards will be of a relief to Ancelotti.

“I think he’s relieved that Dominic Calvert-Lewin is scoring goals,” he added.

“I’m disappointed he didn’t get two today because that was an easy miss.

“I wanted him to score that goal to keep it going, it might not affect him because he’s on good form.

“Richarlison is turning into the best player up front in the Premier League, we saw that with the goal he scored and the header he got for the second goal so I think that’s a big relief because goals are going to make the difference in any team.”

Everton are just one point behind Tottenham in fifth, though Spurs do have a game in hand over the Merseyside club.

But after the victory over Palace, Ancelotti insisted his side still need to improve to reach their goals this season.

“Now our position in the table is good and we can dream about fighting for the Europa League in the next games,” Allardyce said.

“If we improve we have the quality to fight for the Europa League.

“At this moment we believe in what we are doing.

“The spirit is so important here because at times we aren’t good enough with the ball and we have to improve on that.

“But the work everyone has done in this period has been really good.”