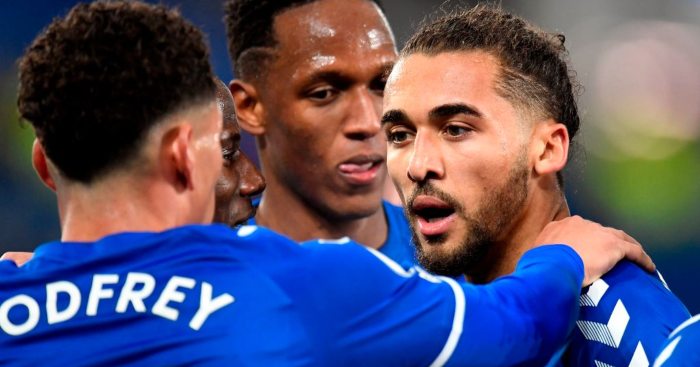 Everton’s Dominic Calvert-Lewin has ‘admirers’ at Man Utd and could emerge as an alternative to Borussia Dortmund striker Erling Haaland, according to reports.

Calvert-Lewin has exploded under Carlo Ancelotti into one of the best strikers in the Premier League with 14 goals in 16 appearances in all competitions for Everton this season.

The Red Devils’ interest in Haaland has been well documented with the Norwegian scoring 39 goals in 35 appearances since Dortmund beat Man Utd to his signing, with the Red Devils not willing to insert a release clause at the time.

United are still understood to be keen on bringing the striker to Old Trafford at the earliest opportunity but Calvert-Lewin has emerged as a possible alternative.

And The Athletic claims that Man Utd see Calvert-Lewin as a ‘different option’ to Haaland despite the Dortmund man still topping ‘[Ole Gunnar] Solskjaer’s list’.

Recent comments from Mino Raiola over Paul Pogba’s future at United won’t have helped the Red Devils’ cause when it comes to signing Haaland, who is represented by the agent.

The report adds that ‘friction from previous negotiations on Haaland still lingers’ and that Calvert-Lewin’s stats are starting to become ‘comparable to Haaland’.

The Athletic does warn though that, despite fitting ‘United’s requirements, the chances of doing a deal appear slim to none’.

Any sale would do ‘irreparable damage’ to Carlo Ancelotti’s relationship with the Everton board and the hierarchy ‘would not countenance any offers at all at this stage’.