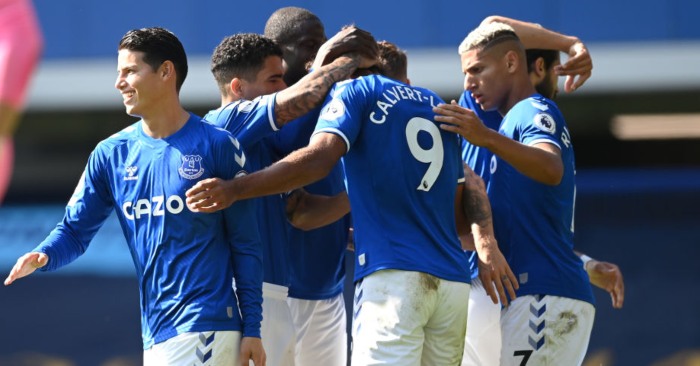 It was a hat-trick to rival Dirk Kuyt’s six-yard special of 2011 – even Dominic Calvert-Lewin might struggle to remember the details of a back-heel, a tap-in and a back-header in years to come – so you will forgive us and Everton fans for dwelling more on the delightful James Rodriguez than the actual hat-trick scorer. While the 23-year-old Englishman is developing a growing reputation as a consummate poacher (aided by some truly rotten West Brom defending), it’s the combination of his finishing, the movement of Richarlison and the sumptuous football of Rodriguez that is truly electrifying.

There has been endless tiresome talk – sometimes by us – about attacking trios in recent years, with the last few days being dominated by discussion about the potential of Spurs’ Kane-Bale-Son to rival Liverpool’s established trio as as the top-flight’s most devastating triptych. On Merseyside on Saturday, we saw another contender; all three walked off the field with at least two goals or assists, though Richarlison may wonder long into the night how he did not score against a woeful West Brom defence reduced to ten men before half-time. But this game suggested he will get many, many more chances in an Everton side built more to entertain than contain.

James Rodriguez is off the mark! 🔵

He finds the bottom corner to put Everton in front. pic.twitter.com/3dwMzGhBQp

There are clearly issues in defence – West Brom’s opener featured some ridiculous positioning – and the midfield is a work in progress, with Andre Gomes in particular doing a job that nobody advertised, but this is a team that will score goals, whether through the interplay of their exceptional forward players, pin-point set-piece delivery or the crosses of Lucas Digne (14 on Saturday), fed impeccably by those gloriously swept balls from Rodriguez. Yes it was only West Brom but there was enough promise in last week’s win over Tottenham that even at 1-0 down and then again at 2-2, you absolutely knew Everton would respond.

This is the first time in eight years that Everton have won their opening two Premier League games, and with respect to Steven Pienaar, Marouane Fellaini and Nikica Jelavic, this Toffees attack feels a tad more intoxicating, combining youthful promise with one man’s redemption story. The Colombian is serving an early reminder – that Liverpool will hope to replicate with Thiago and Tottenham with Gareth Bale – that for all the talk of building squads and sell-on fees, simply buying a really brilliant footballer can still be wonderful transfer business.

His lofted ball over the Baggies’ defence for Richarlison’s cross/shot was one of those passages of play that leads people to talk about second assists; it should surely be worth more than the corner that Calvert-Lewin awkwardly ‘headed’ home under very little pressure. The only shame is that Goodison Park was not full for the standing ovation that would have inevitably followed his substitution and that of Calvert-Lewin. Three seasons after Everton’s top scorers were Wayne Rooney and Oumar Niasse, this is now their attacking reality; it must make Evertonians rub their eyes in disbelief.

The grounded Carlo Ancelotti talked about the need for improvements – his team will not challenge the higher echelons of the Premier League without significant defensive strides – but there is little he can do with that strike trio but to watch and enjoy. We will join him.