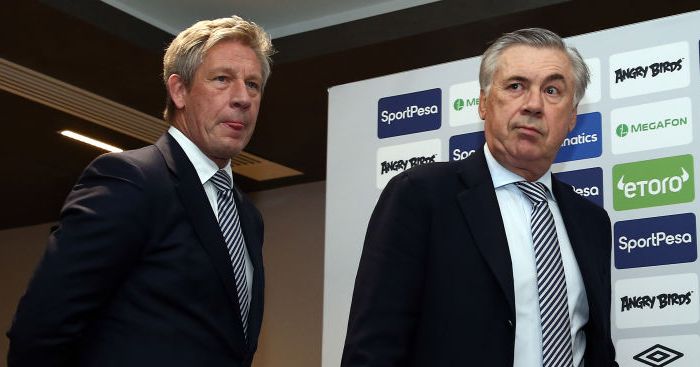 Everton director of football Marcel Brands spoke to angry fans who turned up at the club’s training ground on Monday in the wake of their FA Cup defeat to Liverpool.

A small group of supporters travelled to Finch Farm, seeking to confront players after they lost 1-0 to Liverpool at Anfield on Sunday evening.

The fans wanted to meet players who were training at the time, but instead Brands made the decision to walk to the gate of the complex and listen to their complaints.

The incident came after Everton midfielder Fabian Delph was allegedly involved in a heated exchange with a fan on social media following the defeat.

Everton, who have not won a Merseyside derby away from home for 20 years, lost to a youthful Liverpool side on Sunday, with 18-year-old midfielder Curtis Jones scoring the winner for Jurgen Klopp’s side.

It was a second straight defeat for the Toffees following their New Year’s Day loss at Manchester City.

They were the first defeats since Carlo Ancelotti took charge on December 21, and the Italian said the performance at Anfield was “not good enough” and he would speak to his players about the standards required.

Everton, 11th in the Premier League, host Brighton on Saturday.