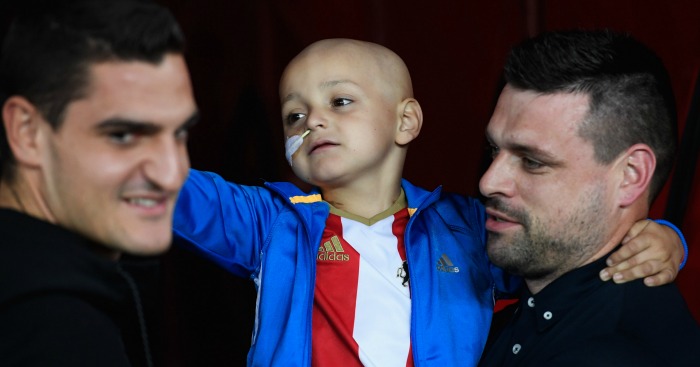 Everton have pledged £200,000 to help the family of a five-year-old Sunderland fan pay for cancer treatment in the United States.

Fundraisers are attempting to collect £700,000 to help Bradley Lowery, who was Sunderland’s mascot in their 3-0 defeat against the Toffees at the Stadium of Light on Monday evening.

And the Merseyside club have made a massive donation to boost the fund after learning of Bradley’s fight.

Everton Football Club has pledged a donation of £200,000 to support @Bradleysfight in his brave battle. Donate here: https://t.co/fxR5tYwG5L

The club said via their Twitter account: “Everton Football Club has pledged a donation of £200,000 to support @Bradleysfight in his brave battle.

“We wish Bradley every success and he has the love and support of every Evertonian.

Great from our Chairman! ?

“The club will also be inviting Bradley and his family to the return game at Goodison Park and the players’ signed shirts from tonight’s game will be auctioned off to support the fund.”

Spectators at the game sang Bradley’s name as the clock reached the five-minute mark, while some carried a banner bearing the message, ‘We’re with you, Bradley” around the stadium.