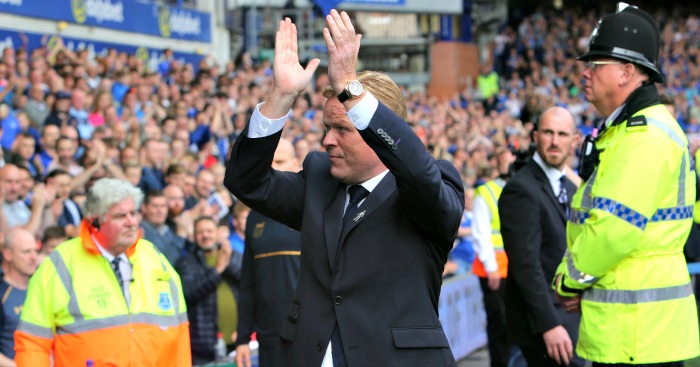 You could sense the exasperation and confusion in Jamie Carragher’s voice. Before him sat a manager dedicated to his craft, willing to fall on his own sword rather than buy a selection of new blades just in case. Roberto Martinez had just told him that he would not change his style, not err from his philosophy of attacking, passing football. It was, to borrow a word from the Spaniard’s vernacular, phenomenal.

The whole interview Carragher conducted with the former Everton manager was an eye-opening experience. At one stage, when the Liverpool legend asked how Martinez intended to stop his side conceding goals, the Spaniard replied: “We are not going to be a team that is just going to be solid, that keeps a clean sheet and waits for a chance to score. We have been built to take control of the game, to break teams down from open play.”

He continued: “The modern trend now in football is to work on being very organised and hitting teams on the counter. That is the easiest and most economical way of playing. You don’t get hurt. I don’t want to be like that. As a manager, I will never look away from the style I want.”

“Do you not think you get better results playing like that?” Carragher asked. “Certainly, it is easier,” came a surprising reply. “But why would you not do that then?” said the interviewer. “The level of your team will give you a certain level,” said the Spaniard. “You will never over-achieve, you will never win silverware. That is a choice. I respect every style.”

The interview, published just a fortnight before Everton ushered him out of the exit door, perfectly encapsulates the difference between Martinez and his Goodison Park successor, Ronald Koeman. There was a manager intent on playing his way, using his style, imbuing his players with his philosophy. Win, lose or draw, Everton would pass, pass and pass. “My philosophy and my way of working is not to keep clean sheets, my philosophy is to win games,” he once said. He often did neither.

In the end, the same was true of Koeman on his first showing as the saviour of the blue half of Merseyside. But the Dutchman’s era begins with promise after a 1-1 draw with last season’s third-placed side, Tottenham.

The Toffees were excellent in the first half on Saturday, pressing with vigour and attacking with intent. Tottenham, who had been defeated in their last two fixtures at the end of last season, were shell-shocked. Ross Barkley’s opener was fortuitous in the extreme, but it was deserved. New signing Idrissa Gueye inspired a wonderful opening 45 minutes, echoing the performance of another wonderful diminutive central midfielder bursting at the seams with tackles, interceptions and passes. N’Golo Kante led Leicester to the Premier League title, and while Gueye is unlikely to do the same for Everton this season, this was proof that the Toffees’ transfer business is not quite as underwhelming as it first appears.

The hosts had five shots on target to Tottenham’s one by half-time. Gerard Deulofeu wasted a glorious opportunity to hand them a two-goal lead, spurning a one-on-one against Michel Vorm. They were dominant, and the fans were crowing. In midweek, Koeman stated that his players were “only 70% fit” after a six-week holiday granted by former boss Martinez. That claim would prove to be prophetic, as Everton laboured in the second half. Tottenham took advantage as their opponents noticeably tired, and Erik Lamela earned Mauricio Pochettino’s side a point.

Koeman was right. 70% fit. Many of them blowing out of their arse on the hour. But can't fault the attitude, effort and the desire.

Such draws – throwing away a lead when in a commanding position – were once synonymous with Martinez’s reign, and are one of the reasons he is no longer manager. For Koeman however, there are mitigating circumstances: This was his first game; his players are not yet at full fitness; a defensive midfielder (James McCarthy) played at right wing-back in an unfamiliar formation; he had no recognised striker. This was a draw tinged with both promise and disappointment for the fans, not the usual anger and despair.

The main reason for the noticeable increase in optimism among the Everton faithful is that Koeman is a manager open to change. Where Martinez once insisted “I will never look away from the style I want,” the Dutchman – who regularly played 4-2-3-1 at Southampton – employed a system with a three-man defence and fluid attackers. For most of the game, it worked; Tottenham were subdued and overcome. His predecessor possessed just one weapon; Koeman boasts many among his tactical arsenal.

Everton’s new hero sits somewhere between their previous two. Martinez was the exotic option after the comfortable but boring union with David Moyes. Koeman is the perfect rebound f***, a delicate blend of attractive and pragmatic, exciting and solid, offensive and defensive. On this showing, and given time to implement his ideals and improve the fitness of his players, this should be a successful marriage.