Home Mailbox Everton, Liverpool should be annoyed by ‘smug arrogance’ of officials 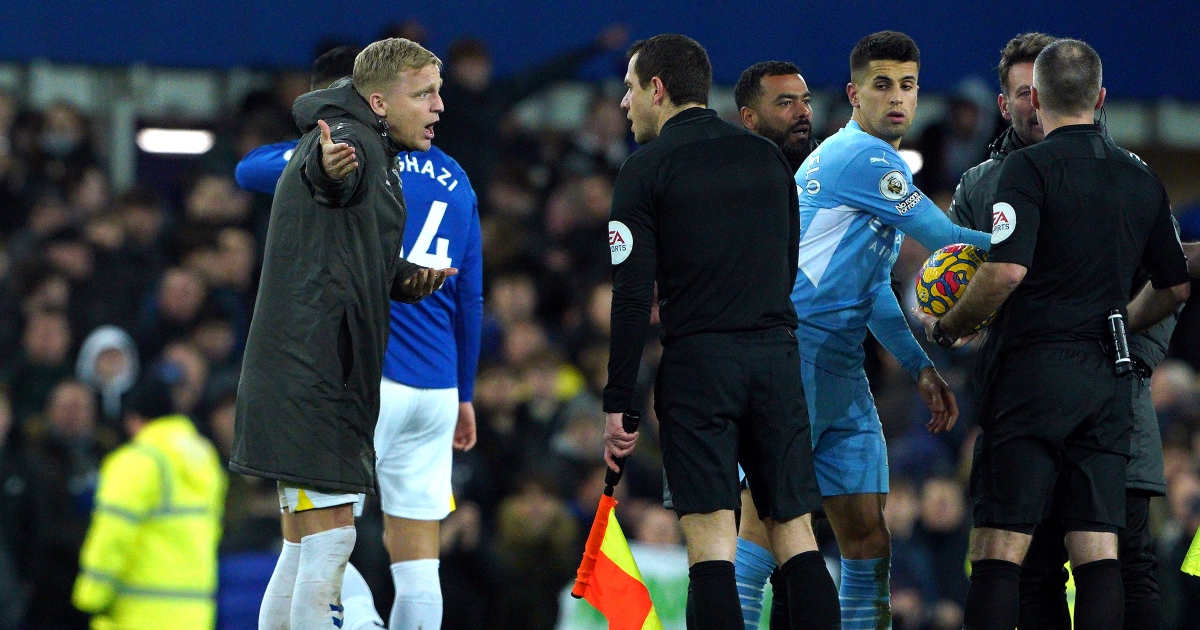 The decision to not award Everton a penalty on Saturday has riled Liverpool fans and neutrals in the Mailbox. Plus, Tottenham, Roman Abramovich and the League Cup final…

Keep your thoughts coming to theeditor@football365.com…

Two views on Tottenham…
In this knee-jerking, over sensationalised, internet trolling, hyperbolic media driven sporting world we all live in, it’s all just a matter of perspective.

View 1: we’ve lost 4 of our last 6 league games. Our manager is acting like a petulant child because he’s never lost like this and doesn’t have the emotional stability to manage the situation. We’re 7th. Out of Europe. Rolled over for Chelsea to miss out on the LC final and we are behind both Arsenal and West Ham. It was only Leeds. Urgh.

View 2: we’ve taken 6 points from our last 9 (all away games), which included a stoppage time – and morale boosting – win over the imperious Manchester City who hadn’t lost in 427 years. The other win delivered a clean sheet and could have been a cricket score. Our next game is in the prestigious FA Cup and a very winnable one, indeed, against Boro. We will be 1 point behind Man U (current incumbent of the coveted 4th place) if we win our game in hand. We have a proven manager who can’t stand to lose and is hell bent on instilling a winning mentality. We’re out of Europe meaning less games, less fatigue and a better focus on the 2 competitions that matter. We now have the most lethal partnership, in terms of direct assists/goals, in the history of the PL.

Everything stated above is true. With Tottenham being all Spursy, they will probably still be – pretty much – true on a rotational and regular basis.

Enjoy those crazy highs and manic lows. It’s what we do.
Glen, Stratford Spur

Rodri penalty decision…
City fan here but that was harsh on Everton I thought.  Don’t get me wrong, I’ll take the three points all day but that was a stone-bonker handball for me (Clive).

There’s no justice in football is there?  If there was, the shift the Toffees put in would’ve seen them come away with a point.  On the plus side, if they can play like that for their remaining games then there’s no way they should be going down.  Not convinced as to their finishing mind.

Anyhoo, onwards and upwards.
Mark (Angry Phil Foden.  Where did he come from?).  MCFC.

Tierney and Kavanagh on VAR. The same team that brought you the joke decisions when they failed to send off Kane against Liverpool.

But it does stink doesn’t it? I’ll never understand how Tierney isn’t at least asked to look at that handball.

A point stolen from Everton tonight which is all the worse because they could literally get relegated by a point the way things are shaping up.

It really is a shame that we have one of the best leagues on earth but the referees are too arrogant, incompetent or stupid to see they’re own lacking and either work harder to improve or import talent from Europe. I always hoped VAR would solve the shit refereeing we all kept discussing in this country but if anything it’s just highlighted the utter incompetence more than ever before.
Minty, LFC

So your armpit, which is anatomically above the T-shirt line, concedes a pen, but you can bat the ball away with your upper/mid arm and it’s not? Got it.

Respect in football has always been low no matter if you compare it to other sports or society in general.

Football powers have tried to either campaign respect as if they’re selling flavoured milk, or force it through fines and bans.

Unsurprisingly neither have worked.  The respect in football sinks everyday.

The latest straw occurred at Goodison Park.  I have no horse in this race however you cut it.  My club aren’t relegation threatened, nor are they in any realistic hunt for a European finish.  So with no bias I can comment that the stubborn, smug arrogance of the officiating was staggering.

I can’t imagine how Everton or Liverpool fans would feel.

I can see how suggestions of corruption can be levelled.  I can see how the permanent sense of injustice Arsenal fans feel comes to be.  Right there in front of our disbelieving eyes, at an important moment in the game and for the season, the refs just went ‘nah’.

Why?  How?  This has to be explained.  It won’t be enough to pass this off as an error and demote the refs for a few weeks.  There are too many people and too much energy in VAR now to scapegoat a handful of individuals.

So I get back to respect.  Leagues and committed and organisations demand refs be respected.  Well, when they are able to behave in such a way and with scrutiny far below the impact of their actions… nah.

Officiating has gone mad, and yet the only way I can see to improve the game from here is to add more.  Every game should be reviewed in full by an almost super VAR.  Cards can be added or rescinded and fines meted out.  Diving, time wasting cheats will be named, carded, ultimates fined and hopefully shamed.  Violent acts caught and dealt with.  And the same ineptitude or worse from refs can also be dealt with.

While this won’t fix deeply unfair results like those Everton have felt, knowing such scrutiny for players and refs is coming can only help remove the fuel from this particular fire.
Dr Oyvind, Earth

I don’t support Liverpool but that Rodri non pen decision after stuff like the Moutinho decision against City makes me realise the whole feckin place is corrupt. Pep will act insulted if questioned, that city fella that wrote in the other day will say we’re all jealous. We’re not. We’re just bored of a financially doped super team’s job being made easier by a reffing system that is too scared to go against the dominating team of the time. Maybe I’m too old for this shit
Duck

Let’s see someone try to defend that.  Appalling that the so called “best league in the world” has absolutely the worst officiating in the world.

Now as a Liverpool fan who has been born and raised in the heart of the city which means I have spent my whole life amongst Everton fans also and felt the full wrath of their bitterness and hatred towards us and absolutely love how we always seem to have the last laugh every time with them, what happened today at goodison park was an embarrassment to what is supposed to be top level refereeing. Take the fact away that the pen if scored gets Everton a point which means we legit can over take city again once on level games…if if ifs of course. Let’s pretend for argument sake that incident happens in Brentford v southampton, a game that has no bearing on my football bias. That is such a joke and embarrassment of a decision and what’s worse is that it’s not a 1 off anomaly it’s just the latest addition to a long long list

As a Liverpool fan I don’t think I can participate in a spectacle which involves a Russian oligarch so intimately.

Make no mistake Abramovich’s wealth and empire is sanctioned by Putin and could only be enabled by a significant portion of that wealth being used to finance and support the aims of this Russian regime.

For once this just feels a little too close to home for me.

Shankly (I think) described football as the most important of the least important things, but if the same money that funds one of that team on the field tomorrow is also funding the mirder of innocent civilians in the Ukraine and war and destabilisation of our world, suffice to say things just got too real for me.

We all overlook the morals of our owners and no club in the premier league is squeaky clean I’m sure but there is a line and for me reading the description of what a hyperbaric rocket does to a human being has done it for me.

I can’t participate in a spectacle which is hand in glove with the horror of war and murder of innocents. I’m out.
Dave LFC

Two responses…
In response to both MB and Michael, probably an ex-Chelsea fan.

To you both, there’s a lot of ‘tribalism knee-jerk reaction Defend My Team’ pills doing the rounds. Looks like I double dropped mine responding to MB last time.

You’re both right, not my place to judge and demand. And sorry I did.

MB – you are of course right. Spot on in fact. People / fans should most definitely “be interested in the thoughts of a fan struggling with these messy issues in real time”.

Didn’t mean to be so dismissive.

Michael, probably an ex-Chelsea fan. You too are right, “I don’t get to say whether what the rest of us think is or isn’t valid”. What was I thinking? And I mean this sincerely. Sounded like the pompous person I accused MB of being. Again,my bad.

Everyone has a valid view. If you’re passionate and concerned enough about issues here to feel you want to stop supporting your team, then it’s serious – and you have thought it through.

And you have every right to share your thoughts – and the last thing needed is, as I said above, my knee-jerkery defend club-ness.

Was probably subconsciously preparing myself for the scousers’; songs tomorrow.
The_M_Rod