Everton v Liverpool had four goals and a red card; there should have been another for Jordan Pickford. 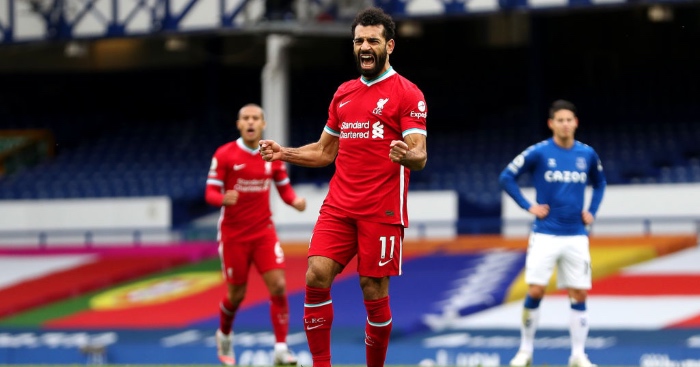 Dominic Calvert-Lewin’s header salvaged a 2-2 draw for Everton in a controversial 237th Merseyside derby at Goodison Park which saw Richarlison sent off late on.

Everton had already escaped a red card and a penalty for goalkeeper Jordan Pickford early in the first half for a knee-high challenge on Virgil Van Dijk, which ended the Holland captain’s afternoon, but there was no VAR reprieve for the Brazilian’s lunge on Thiago Alcantara.

Jordan Henderson thought he had won it in the five minutes of added time against 10 men when Pickford fumbled his shot but the goal was ruled out for the tightest of offside decisions against Sadio Mane.

It was another contentious decision which meant the defending Premier League champions made the short trip home aggrieved at what they perceived a failure of VAR.

The Sadio Mane offside is the same as Virgil van Dijk. It would not have been offside last season.

As the upper arm is now legal to play the ball, an attacker is calculated slightly further forward (arm not armpit).

Mohamed Salah put the Reds 2-1 up with 18 minutes to go with his 100th Liverpool goal only for it to be cancelled out by the in-form Calvert-Lewin with a trademark far-post leap.

Mane had put the visitors ahead in the third minute only for Michael Keane to equalise with a header midway through the first half.

However, the game’s pivotal moment was Pickford seemingly getting away with clattering Van Dijk and confusion still reigned after the match as to whether a mistake had been made.

VAR ruled the Dutchman’s shoulder had been offside in the build-up but the PA new agency understands video official David Coote then did not check for a potential red card despite having the power to do so and called ‘check complete’.

Had he ruled the England goalkeeper was guilty of serious foul play Everton would have been down to 10 men and faced a penalty against them already trailing to Mane’s quickfire goal, which he hammered in at the near post from Andy Robertson’s cross.

If that was lucky then Everton benefited two-fold as Liverpool’s defensive linchpin, who had not missed a minute of Premier League football since January 2018, was unable to continue and was replaced by Joe Gomez after 10 minutes.

His presence was sorely missed as Everton equalised nine minutes later. Adrian, who had parried Calvert-Lewin’s shot behind, could only push Keane’s header from James Rodriguez’s corner into the roof of the net despite getting two hands to the ball.

Pickford kept the score level with a full-stretch save to deny Trent Alexander-Arnold before Everton suffered a defensive injury of their own when Seamus Coleman, the only survivor of their last win in a derby, went off with a hamstring injury to give new signing Ben Godfrey his debut.

He was given a tough examination by Mane, who almost scored in similar style to his first but opted for the far post instead of the near and saw the ball spin wide from another Robertson cross.

Both sides were celebrating anniversaries on this day: for Liverpool it marked a remarkable five years under Jurgen Klopp, in the 10th anniversary week of Fenway Sports Group’s ownership.

For Everton it was somewhat sadder: a whole decade had passed since their last derby win and it was also five years since former manager Howard Kendall died.

It was fitting the second half was more of a contest, with Henderson’s half-volley just over followed by better chances for Calvert-Lewin, who completely missed Lucas Digne’s low cross into the six-yard box, and Richarlison, who headed against the post.

The match needed a moment of quality and it came from Salah, although it was preceded by a mistake as Yerry Mina’s weak clearance dropped to the Egypt international who volleyed home.

Salah brought up his century in his 159th match, making him the third-fastest to three figures for the club behind only Roger Hunt and Jack Parkinson, and Joel Matip almost made it 3-1 with a powerful header Pickford managed to keep out.

Bur Calvert-Lewin, with his 10th goal in seven Everton games, also reached a landmark of his own after becoming the first Toffees player since Tommy Lawton in 1938 to score in his opening five games of a league season.

There was more drama to come as Richarlison became the 22nd red card in 57 Premier League Merseyside derbies before VAR denied Henderson a very late winner.

The point meant Everton, who went into a derby top of the table for the first time since 1989, retained their spot at the summit even if the winless streak against their neighbours was extended to 23 matches.