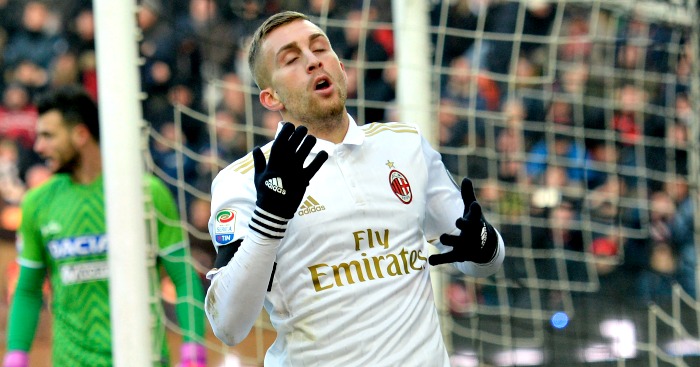 This article first appeared on excellent website, The Set Pieces. Give them some love…

As the clock ticked down in AC Milan’s Coppa Italia quarter-final away to Juventus, the visitors trailing 2-1 and reduced to ten men after Manuel Locatelli’s red card, Gerard Deulofeu was sent on to make his debut. The loan signing from Everton had only been confirmed 24 hours prior but he immediately fashioned a chance for an unlikely equaliser.

Racing on to Luca Antonelli’s hooked ball over the head of Leonardo Bonucci, Deulofeu took a perfect first touch with the outside of his boot to evade Daniele Rugani and close in on goal. It was the sort of effortless skill regular viewers of the Premier League have come to expect of the 22-year-old and yet, as the angle tightened and his balance failed, he could only stab a weak shot at the feet of Juventus goalkeeper Neto. It was symbolic of his career so far: instinctive quality betrayed by a stifling lack of conviction at the crucial moment. Or no end product, to use the complaint often heard around Goodison.

Deulofeu’s ability is undeniable and, for any Milan fans still coming to terms with the club’s faded stature in European football, pondering why they are now pursuing temporary deals for Everton squad members, the Spaniard’s late cameo last Wednesday provided enough encouragement to wonder if he can turn around an ailing season. Milan have won only one of their last six matches in Serie A, but if Vincenzo Montella can harness Deulofeu’s capricious talent over the next four months he could be the catalyst in closing the eight-point gap to Napoli and Champions League qualification.

For a player who started out at Barcelona’s La Masia academy, the storied surroundings of his new club may help to revive a career that has stalled over the past 12 months. It was only a year ago that Everton were worried about Barcelona taking advantage of the reported €9million buy-back clause in the winger’s contract, a concern that has long been forgotten. The Spanish giants allowed their option to expire in the summer and perhaps the sudden realisation that the cord had been cut for good is what has inhibited his recent performances.

When Roberto Martinez spoke anxiously about Deulofeu’s contract at the end of 2015, the idea that both would have departed Everton in little over a year seemed unthinkable. But under new manager Ronald Koeman, Deulofeu has started only four Premier League matches, failing to register a single goal or assist before his convenient escape route to Serie A. If he is low on confidence after being pushed to the periphery at Everton, the resurgence of one of his new teammates in Milan should provide inspiration.

In the year before Deulofeu arrived on Merseyside for his first spell at Everton, Suso enjoyed a breakthrough campaign at Liverpool, making his Premier League debut as an 18-year-old against Manchester United. So precipitous was his emergence that he was awarded a new long-term contract in October 2012, with Brendan Rodgers praising a talent and temperament that belied his years. When Rodgers spoke of Suso’s ‘seven-and-a-half role’ at Liverpool, it was a nod to the intelligence of a young player who offered a different dynamic in the team’s attack.

It seemed Suso was destined for a sparkling career at Anfield, but he struggled to keep his place after Philippe Coutinho arrived in January and was loaned to Almeria in La Liga for the following season. He recorded seven assists in the Spanish top flight, equal to Andres Iniesta and one more than Luka Modric, only to find he was no longer a priority for Rodgers upon his return to England. A move to Milan materialised in January 2015, but it looked set to be another short stop in what had all the hallmarks of a peripatetic career. Suso made only six Serie A appearances in the first year of a four-year contract and was loaned to Genoa at the start of 2016.

It was then, however, that he seized his opportunity – just as he did at Almeria – scoring six times in 19 matches, including a brace in a 3-0 win at Sampdoria who were then managed by Montella. Six weeks later Montella was appointed by Milan, and Suso had clearly made an impression on his new coach. He featured in all but one of Montella’s first ten starting line-ups and secured his place on the right side of the front three with a brace in a 2-2 draw against Inter Milan in November. In his best campaign to date, he has claimed seven assists and scored five goals so far, setting the example for Deulofeu to follow.

Suso’s turnaround is entirely of his own making, and one Deulofeu should seek to replicate in the remaining months of the season. Neither player could save Milan from losing to Udinese on Sunday, despite Suso assisting Giacomo Bonaventura’s early opener and Deulofeu coming off the bench to replace the injured goalscorer in the first half. The winger created a promising opening for his compatriot after the interval, but Suso’s curling shot was deflected past the post before his free-kick drew an impressive save from Udinese goalkeeper Orestis Karnezis.

It was another leading performance by Suso to give Deulofeu hope of reigniting his own form. At one stage he was reproached by his teammate for shooting from a tight angle when a simple pass to Suso would surely have brought a goal. But the winger has an opportunity to make amends in Milan’s next match at home to Montella’s former club Sampdoria on Sunday, a fixture that is followed by a game in hand against Bologna in midweek as Milan look to close the gap to third place. For Deulofeu, this is the second chance that could define his future career path. He can learn from Suso how to take it.