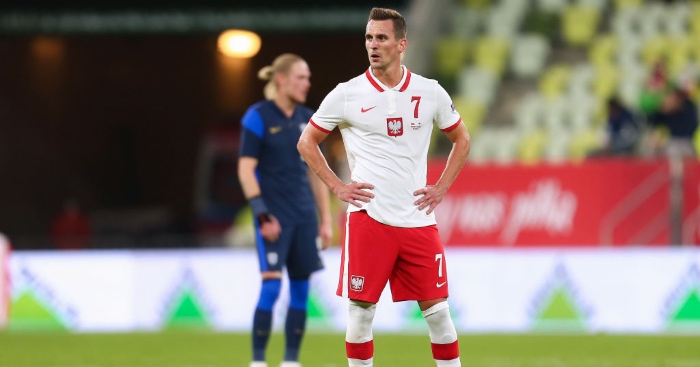 Everton and Tottenham will reportedly battle it out to sign Napoli and Poland striker Arkadiusz Milik.

The 26-year-old is looking for a route away from Napoli after expressing his desire for a ‘new challenge’.

He’s previously been linked with Man Utd and Spurs, but Everton have now become the frontrunners to sign Milik.

According to Football London, Toffees manager Carlo Ancelotti wants to sign the player from his former club Napoli.

Ancelotti knows that the player is out of contract in the summer, which means a cut-price deal might be struck.

The fee being reported is around £10 million, which means Everton could sign a decent striker for a meagre sum in the current market.

Spurs are still in with a shout, however, and should not be overlooked.

They finally brought in an understudy to Harry Kane in the form of Carlos Vinicius. But manager Jose Mourinho will still be open to improving his forward line.

Milik looks like he will certainly leave the Italian side. It’s now just a question of when and which club he will go to.

If Napoli want to recoup any money for the player then they will have to sell in the upcoming January window.

If they don’t do that, then they could lose around £20 million on a good striker.

Ancelotti is in the market to sign a backup for Dominic Calvert-Lewin. The Englishman is in great form at the moment but could do with some rest.

Signing Milik would give Ancelotti a great choice each week. Everton fans will be encouraged by the signing of Allan, who was brought in from Napoli.

The midfielder has proven to be a great signing for just £27 million. He is helping to provide stability in the Everton midfield, alongside Abdoulaye Doucoure and James Rodriguez.

A transfer race could start in January as the two Premier League sides fight to improve their attacking options.