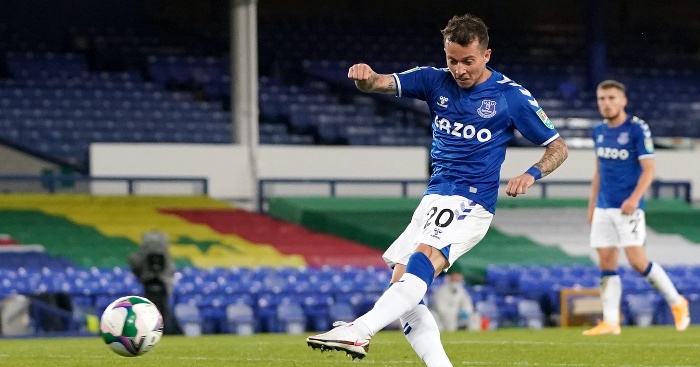 Everton have reportedly placed a £9 million price tag on Brazilian winger Bernard, amid rumours he could leave the club this month.

Bernard has been linked with United Arab Emirates side Al Nasr recently.

FEATURE: Five players who could force their way into England squad

According to The Daily Telegraph, Bernard is one of the players that could be sold. Everton are willing to listen to offers of around £9 million for the 28-year-old.

Reports emerged yesterday detailing interest from Al Nasr. They want to sign the player permanently and could do so for a reduced fee, as his contract expires next year.

The Brazil international has spent a lot of time on the bench this season. He’s appeared in the league six times but has only completed 90 minutes once.

Bernard has slipped down the pecking order under Italian manager Carlo Ancelotti. He tends to play Alex Iwobi and Richarlison on either wing, leaving Bernard with no place in the first team.

In their recent victory over Wolves, Ancelotti selected Lucas Digne on the left flank instead of Bernard. That showed his preference for defensive solidarity rather than flair going forward.

The player can also operate as a central attacking midfielder, although the Toffees have plenty of strength in that position. James Rodriguez and Gylfi Sigurdsson can operate there.

Everton brought in Rodriguez and Allan last summer, alongside Abdoulaye Doucoure. They’ve all proved to be successful signings but have also been costly through their wages.

Club officials now want to trim that weekly bill by offloading players. Bernard is currently at the front of the queue to leave.

Cenk Tosun and Yannick Bolasie could join him in leaving Goodison Park.

Tosun is being targeted by Besiktas in his native Turkey. He could complete a loan deal this month.

Bolasie, meanwhile, is the subject of interest from Middlesbrough.