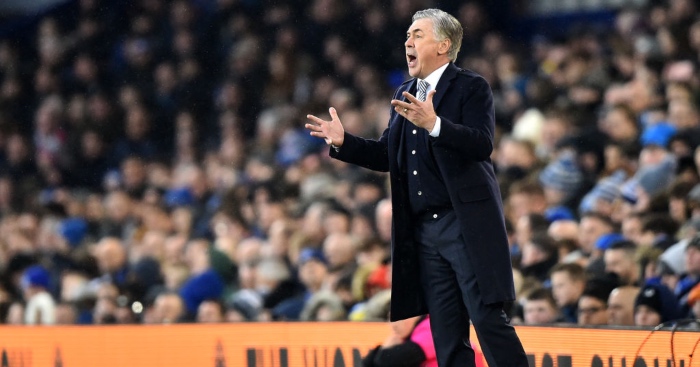 New Everton manager Carlo Ancelotti insists there will be no discussions about transfer targets until after next week’s FA Cup Merseyside derby.

The Toffees have been in need of a reliable goalscorer since Romelu Lukaku left for Manchester United in 2017 and their late 1-0 win over Burnley on Boxing Day only highlighted that fact to the Italian.

Dominic Calvert-Lewin scored with a diving header but that was only after his side had dominated possession – 75 per cent in the first half, 68 per cent overall – and had 21 shots, only five of which were on target.

But Ancelotti will not be talking transfers with director of football Marcel Brands until the completion of the festive period of matches, continuing at Newcastle on Saturday and including Manchester City on New Year’s Day and another trip to Anfield four days later.

“Up front we are really good but we didn’t talk about this because until January 5 we have to be focused on the three games. After that we can talk about whether we need something or not.”

It was suggested to the Italian, with matches coming thick and fast, it was an opportune moment for him to get an early overall assessment of all the players he has inherited.

However, he said changes would be made out of necessity and not to get an idea of what he had to work with.

“I rotate the players only to avoid injury, to put a fresh team out for Saturday but not because I want to have an idea about what I want to do in January,” he added.

“We have to pray to avoid injury because there is a big possibility a player can have an injury.

“We hope that the players have a good rest and our staff have to do the maximum to recover them but we know (playing again in) 48 hours is impossible.

“The first day after the game is not so bad but the second day is the day where you feel really tired. To put a game after two days is quite difficult.

“We have no possibility to train tomorrow, just use this 48 hours for recovery. That’s it.

“What we will do in January we will see.”