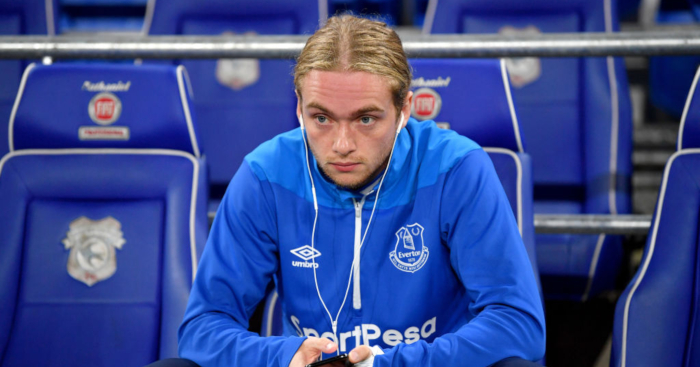 Everton’s Tom Davies has become a top target for Newcastle manager Steve Bruce, according to reports.

Bruce wants to create a core group of British players at the club and could sign Davies as part of this plan.

He would join the likes of Sean Longstaff, Jamaal Lascelles and Jonjo Shelvey who are already the club.

FEATURE: Every Premier League club’s player of the season

Davies is a promising young player who came through the Toffees’ academy and made his first team debut back in 2015.

He’s represented England U21s internationally and could be signed by Bruce as a player for the future.

The Daily Mail report that Newcastle are willing to open negotiations with a £12 million bid in the coming weeks. They might not be able to go much higher than this as a result of the failed Saudi Arabian takeover.

Bruce now has a reported £30 million to play with in order to secure Premier League football for the side.

Everton are open to offloading players this summer but Davies may cost more as he’s young, homegrown and rated by manager Carlo Ancelotti.

The Toffees are also looking to keep hold of their midfielders after missing out on Pierre-Emile Hojbjerg.

The Danish international signed for Tottenham for a reported £15 million fee recently.

Newcastle are on the hunt for a left-back and a striker as they aim to finish higher in the Premier League next term.

Bournemouth goalscorer Callum Wilson is on their watchlist and could join for a reduced fee after the Cherries’ relegation to the Championship.

Former Derby and Burnley midfielder Jeff Hendrick is close to joining the Magpies on a free transfer. Their other piece of transfer business is the pursuit of Wigan left-back Antonee Robinson.

Robinson is available for around £1.9 million, although Newcastle face stiff competition from Sheffield United and Fulham for the player.

With reduced funds available to him, Bruce may be priced out of a move for Davies if the first offer is rejected.