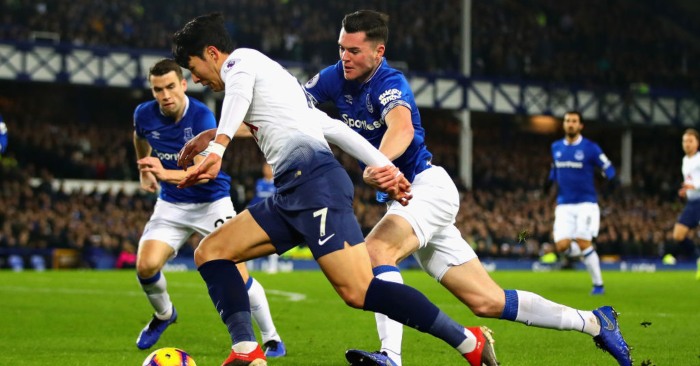 Marco Silva and Mauricio Pochettino rank second and fourth in the bookies’ sack race, and yet their respective crises aren’t the reason why Sunday’s clash at Goodison Park is the pick of the weekend games. Well, it’s either that or Crystal Palace v Leicester City.

When confidence is low, tactical organisation inevitably crumbles. Tottenham Hotspur and Everton are both ambling around the pitch of late, their midfields oddly decompressed and their defences unusually error-prone. That should conspire to create an open, end-to-end game with plenty of goalmouth action.

Here are five tactical questions ahead of Everton v Tottenham:

1) Can Everton repeat their last home performance to blow Spurs away?
Everton’s 2-0 win against West Ham a fortnight ago looked like a watershed moment for Marco Silva. Finally they used the sort of high-pressing, Pochettino-esque attacking tactics that Silva has been striving to implement for the last year, and while a subsequent 3-2 defeat at Brighton has dampened the mood, Everton – back on home soil – could pick up where they left off.

Silva preaches aggressive pressing, using narrow attacking lines to overwhelm the opposition in the middle and create space for marauding full-backs. It has been wholly unsuccessful so far at Everton, largely because the squad is still a mish-mash of former managers’ playing styles; it is hard to play high-energy football when prosaic possession players from the Ronald Koeman era, like Gylfi Sigurdsson and Morgan Schneiderlin, are still at the club.

The key to success against West Ham was finally selecting Tom Davies, the sort of head-up progressive midfielder needed to set the tempo for Silva’s tactics. He was complimented by a more fluid, fast-paced forward line of Alex Iwobi, Theo Walcott and Richarlison, whose runs further energised the home side.

Given how flat-footed Tottenham have looked recently as their press diminishes and confidence wanes, there is a possibility that a Davies-led Everton can swarm and unsettle the visitors.

Coming off wearing the armband for the 🏴󠁧󠁢󠁥󠁮󠁧󠁿 U21s, he helps get a much needed win for the Toffees! 🔵 pic.twitter.com/7v8NTKMG66

2) Or will Everton’s wide-open midfield give Dele Alli the chance to shine?
Then again, Davies was dropped for the midweek EFL Cup win against Watford after just one below-par performance at Brighton; Silva really doesn’t seem to like the 21-year-old. Should he be left out of the team, and should Everton fail to race out of the blocks, then familiar tactical concerns in central midfield will hand Tottenham the advantage. The tactical battle at Goodison Park on Sunday is, first and foremost, psychological.

The problem with Silva’s tactical approach is that it either works brilliantly or completely falls apart; as soon as energy levels drop, there is no compression between the lines, leaving a two-man central midfield with a huge space to cover both in front and behind. The forwards stay high, the full-backs still want to overlap, but sensing danger the centre-halves backpedal. It’s a recipe for the sort of wide-open midfield that makes players like Andre Gomes look totally lost.

Here is a chance, then, for Dele Alli to remind us of his talents. Dele was one of the better Spurs players in their 1-1 draw with Watford, and he could build on that performance in the gaps between the Everton defence and midfield. Dele’s main problem is that he seems to float between two roles, not particularly excelling as a number ten or a number eight.

However, Everton’s disorganised midfield shape could be ideal for Dele to buzz as a second striker around Kane, drifting into pockets of space to run the game – like the good old days.

3) Does last season’s 6-2 mean Spurs will plump for a diamond 4-4-2?
Here’s another reason Dele could be crucial: Pochettino might go for a diamond 4-4-2 with Dele at the tip, repeating the tactics that helped Spurs to a 6-2 win at Goodison Park in December last year. Ten months might seem too long ago for a tactical comparison, but as many as 15 of the 22 players who began that game are likely to start on Sunday, including Spurs’ entire midfield and attack.

Everton will use the same 4-2-3-1, and they suffered from gaping holes in central midfield that day, just as they have done so many times this season; Idrissa Gueye, now at PSG, was conspicuously absent in December. Pochettino’s diamond gave Spurs a huge numerical advantage in this area of the pitch, releasing Dele and Christian Eriksen to charge into the number ten space and feed through balls for strikers Harry Kane and Heung-Min Son.

A horribly disorganised Everton back four were left frantically racing towards their own goal as Son and Kane repeatedly made aggressive runs, with a then-in-form Spurs bursting through the Toffees’ soft centre. The visitors surely won’t be as rampant, but nevertheless a diamond 4-4-2 could layer nicely on top of Everton’s 4-2-3-1.

4) Will Digne v Aurier prove to be the game’s key battle?
From Andrew Robertson to Jose Holebas to Lucas Digne, left-back has always been a crucial attacking threat for Silva teams. That’s because Everton like to narrow the pitch going forward, sucking the opposition inwards to create room out wide for full-back to arrive from deep. This system could be ideal for facing Spurs – if their 2-1 defeat to Liverpool is anything to go by.

In a flat 4-5-1 when out of possession, Tottenham inexplicably left the flanks open at Anfield, allowing Trent Alexander-Arnold and Andrew Robertson to run the game, receiving either simple short passes into feet (Spurs’ widest players Son and Eriksen did nothing to cut off the passing lane) or long diagonals from each other.

Obviously Spurs won’t treat Everton in the same way as the league leaders, but nevertheless the ease with which Liverpool overloaded the wide areas is a cause for concern – particularly with Serge Aurier up against Digne. Aurier is a calamitous defender; he often gets caught ahead of the play, fails to spot danger, doesn’t track runners and jumps into tackles. Any team facing Tottenham right now would target Aurier’s side. It’s something Everton, with Digne their most creative player, would do irrespective of the opponent.

5) How Will Son’s role impact still-adapting Sidibe?
Seamus Coleman’s appearance in the EFL Cup in midweek probably means another run out for Djibril Sidibe, the right-back signed from AS Monaco over the summer who started each of Everton’s last two league games. It’s easy to see why Silva likes him, which is to say Sidibe will compound Everton’s defensive problems, not solve them.

The 27-year-old flies down the right wing, making gut-busting runs the second he releases the ball for a short pass; against West Ham, Sidibe was looking for an assertive one-two whenever play was on his side of the pitch. That’s good news for Silva’s attacking tactics, but not defensively. West Ham repeatedly got at him a fortnight ago, plus Sidibe was caught out of position for Brighton’s winner last weekend. It will take him some time to adapt to the pace of English football.

Son, whether up front in a diamond 4-4-2 or on the left wing in a 4-2-3-1, will frequently peel out to confront Sidibe one-on-one. Son is one of the very few Spurs players who has maintained form during this sticky patch, and indeed as minds seize up in midfield he is increasingly used as a simple out-ball to create chances, a bit like how an aimless Chelsea came to rely on Eden Hazard under Maurizio Sarri.

Keep an eye on the battle between Son and Sidibe, one of several mismatches that should make this a very entertaining game.