Home F365 Says Everton will face Liverpool as rivals, if not equals… 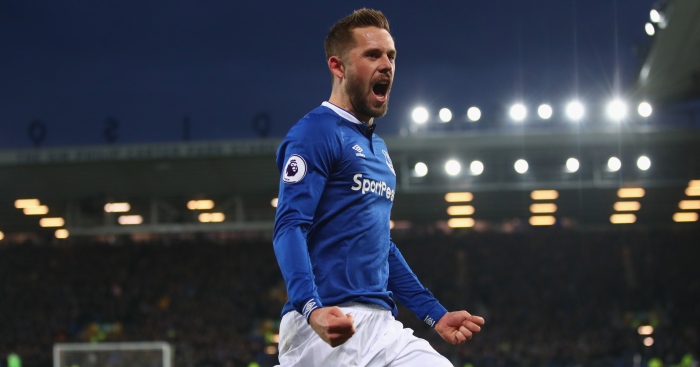 “The object of the exercise was to frustrate the opposition,” said a grinning Sam Allardyce after the most Sam Allardyce of results – a 1-1 draw in which the opposition set an Opta record for possession at 79%, had 12 corners and 23 shots and yet emerged with only one point. Liverpool, you were well and truly Allardyced.

Frustrated? Jurgen Klopp was utterly furious after a game “when only one team is trying to win it and the other team were never in our box”.

And yet you could hardly blame Allardyce for his ultra-defensive tactics; this was a Liverpool side who had scored 19 goals in their previous six Premier League games. Doing anything else would have been suicidal. Everton were only 11 points but several leagues below Liverpool, just a few games into an Allardyce experiment that would bring mid-table safety at the expense of fan consciousness. That day at Anfield, they fielded a defence of the curiously impressive Jonjoe Kenny, Mason Holgate, Ashley Williams and Cuco Martina, none of whom will be involved this Sunday. Indeed, Jordan Pickford, Idrissa Gueye and Gylfi Sigurdsson are likely to be the only survivors less than 12 months on. Everton have been transformed.

Do not be fooled by the identical 11-point gap; that was forged in the early weeks of the season when Marco Silva’s team were very much a work in progress. Over the last two months, Everton have actually picked up more points than Liverpool, scoring the same number of goals (12) in the process. Everton’s fixtures may have been kinder, but it is undeniable that the Toffees kick off this Merseyside derby not quite as equals, but certainly as actual rivals.

Everton have finally arrived back in sixth – two years after they were last there under Ronald Koeman – and it feels like they could spend the whole season there. This feels sustainable. After beginning the season with just one new signing in the team (one more was on the bench, two were injured and one was far from match-fit after no football since March), all five of Silva’s major summer signings are established in his starting XI. Silva has made just one change in five games and that was enforced; Kurt Zouma was ineligible to play Chelsea, allowing Yerry Mina to take his rightful place in the centre of the Toffees’ mean defence alongside the rejuvenated Seamus Coleman, improved Michael Keane and excellent Lucas Digne.

Only Manchester City, Liverpool and Chelsea have allowed more shots this season; Allardyce could only dream of those kind of statistics.

In midfield, Silva has finally found a partner worthy of the wonderful Gueye in Andre Gomes, a European Championship and La Liga winner who arrived with an injury but is now playing with freedom. He was truly magnificent against Cardiff on Saturday, prompting Silva to stop journalists’ questions in their tracks with a plea to help Barcelona “forget about him a little bit”. He is hoping that the Spaniards will quietly allow his loan spell to become a permanent move with minimum fuss and outlay. Right now, that looks unlikely.

Silva has undoubtedly had belated luck with injuries, affording him the leeway to discard Morgan Schneiderlin as ruthlessly as Jose Mourinho did, while Kenny, Holgate and Oumar Niasse cannot even make his match-day squad. He has been allowed to spend, but nowhere near as much as Koeman before him, and the difference is that Silva brought in six players and all six are very much part of his plans. It was spending with a plan. And right now it’s a pretty much perfectly executed plan.

Silva’s Everton side may not even be able to match Allardyce’s in taking a point from Anfield, but there is pretty much zero chance of them recording just 21% possession. The object of Silva’s exercise will not only be to frustrate the opposition. And that’s progress.