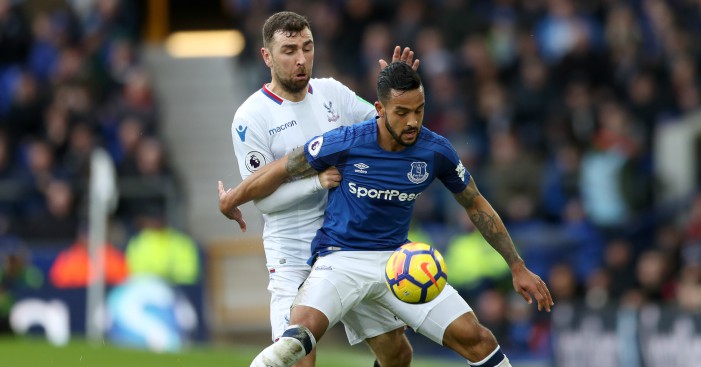 Were it not for that wonderfully creative chant in honour of their potential long-term love, Goodison Park might have been entirely silent for the entirety of the first half as injury-ravaged Crystal Palace happily ceded possession to the Toffees, who duly produced one (long-distance) shot on target.

It was probably Walcott’s effervescence that saved his teammates from half-time whistles and boos after 45 forgettable minutes, though the goodwill generated by Seamus Coleman’s second appearance in a week helped postpone the pitchforks. Everton’s outstanding players from their 2-1 win over Leicester had once again produced the only moments saving a quiet Goodison crowd from open mutiny.

Boredom often leads to nostalgia and there were more than a few mutters about Everton’s right-sided behemoths Steven/Stevens doing that first half when the football was providing little entertainment. A fit Coleman is potentially the Premier League’s finest right-back, while Walcott is thriving away from the toxicity of Arsenal; together they could be Everton’s best right-sided partnership in over 30 years.

Sam Allardyce is still an awful long way from winning the affection of most Everton fans – even after a 3-1 victory that should any lingering doubts about safety – but if he leaves this summer, he will at least bequeath a partnership full of pace, positivity, verve and invention; it’s possibly not a legacy he would relish.

when the rest of the club gets it's shit together the Coleman/Walcott connection will be seriously fun to watch. #efc

That largely dire first half ended with Allardyce berating his players for not playing direct enough. That sight – coupled with Coleman being withdrawn at the break – must have sent a shiver through Everton fans, but the players followed their apoplectic manager’s instructions to the letter. Within seconds of the re-start, a long punt had led to the game’s opening goal from Gylfi Sigurdsson. Walcott had provided the first-half entertainment, but he was as much a bystander as the Palace midfield when the ball hit the net.

He registered neither goal nor assist but there is little doubt that Walcott was the game’s outstanding player. He was the difference between Everton v Palace being a relegation six-pointer and the Toffees looking like a team who could yet match pre-season predictions and finish seventh, even though they have taken a circuitous route to get there.

On the day when Arsenal were outclassed by Tottenham, it is easy to say that the Gunners missed Walcott, Alex Oxlade-Chamberlain or any other player loved too deeply and then allowed to go stale by Arsene Wenger. But Arsenal would not have been able to bring on this version of Walcott, who is revelling in being the first name on a teamsheet for what must feel like aeons.

Walcott had become a smaller and smaller fish at Arsenal and was – in the end – barely more substantial than plankton. He is now discovering it can be an awful lot of fun being a massive whale in a smaller pond; he has probably been shown more love in the last three weeks than in the previous three years at Arsenal.