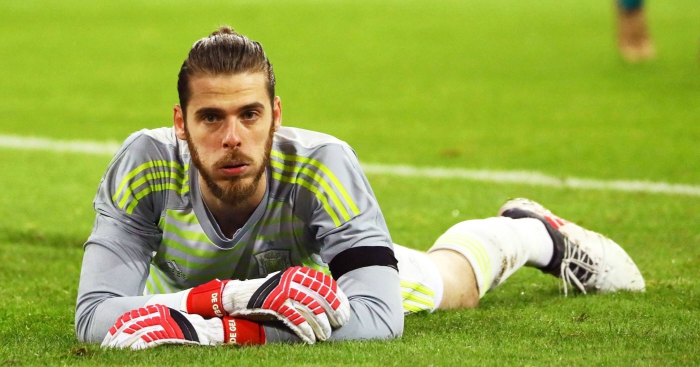 Arsenal – Aaron Ramsey
Arsenal have another clutch of contracts expiring next summer (Danny Welbeck, Nacho Monreal, Petr Cech, David Ospina) but Ramsey is by far the most important. Unless Unai Emery clicks this team into gear, Arsenal’s longest-serving player is surely going to fancy trying to win a league title somewhere?

Bournemouth – Junior Stanislas
You will mock and deride me, but Stanislas cannot have been that far away from getting a call-up to the England senior squad over the last six months. He has 12 goals and seven assists over the last two Premier League seasons, becoming Bournemouth’s most dependable attacking player. Now 28, might he eye one more shot at the big time?

Brighton – Glenn Murray
Brighton have a bloody long list, including Biram Kayal, Gaetan Bong, Bruno and Tomer Hemed, but all of those are the wrong side of 30 and so it indicates good planning that all are on shorter deals. All will surely leave if Brighton survive relegation again, too. Glenn Murray is the standout name, but turns 35 in September and it wouldn’t even be that surprising if he left this summer. A new deal? Probably not.

Burnley – Steven Defour
Defour credits Sean Dyche with rescuing his career after his move to Turf Moor, and spoke in February to insist that he would happily sign a new contract if the offer was right. Unfortunately , the Belgian hasn’t played since knee surgery in January, and will be concentrating on getting fit for the start of next season. Watch this space.

Cardiff City – Neil Etheridge
He may not have the No. 1 shirt, but nobody played more Championship minutes than Etheridge last season. Cardiff’s defence was miserly partly due to Neil Warnock’s organisation abilities, but also because Etheridge was excellent. Not bad for someone who was close to falling out of league football in 2014.

Chelsea – Thibaut Courtois
Take your pick. Olivier Giroud only signed on until the end of next season, while Pedro, David Lui and Gary Cahill are all first-teamers whose contracts expire at the same. Tempted to pick Stamford Bridge hall-of-famer for the funnies, but Courtois leaving on a free would be no laughing matter. Real Madrid?

Crystal Palace – Jason Puncheon
Palace had 11 deals expire this summer but only three in 2019, so they’ll save on printing and fountain pen ink costs. Of the three that do expire, Puncheon pips Pape Souare with Jonny Williams lapped by both of them. Puncheon’s cruciate ligament injury may keep him out of the start of next season. Eesh.

Everton – Leighton Baines
The ages of the six Everton players out of contract next summer: 35, 35, 33, 33, 32, 24. Tyias Browning is the odd one out but doesn’t deserve nomination here, so instead we’ll go for Leighton Baines. I’m pretending that it will be an issue if he leaves – it won’t be.

Fulham – Denis Odoi
Odoi almost left Fulham in the summer of 2017. He was close to joining Gent back in his home country, but the chairman’s son Tony Khan intervened to keep him on. Odoi was given a new contract with increased salary. It worked out pretty well. Odoi played 38 league games in 2017/18 culminating in him earning promotion to the Premier League. Shame about the red card against Aston Villa.

Huddersfield Town – Michael Hefele
A whopping 11 players at Huddersfield, including Laurent Depoitre. But Hefele wins, not least because I can’t stop singing his full name to the tune of Natasha Bedingfield’s banging hit I Bruise Easily. Enjoy.

Leicester City – Christian Fuchs
Another club whose only players out of contract next summer are all over 30, 2019 will see the title-winning squad edged out a side door. But we’ll go for Christian Fuchs, because his name sounds like a questionable website you caught your religious uncle browsing on his new tablet.

Liverpool – James Milner
Daniel Sturridge’s contract expires next summer, but I can’t think of his wiggly dance without getting sad about the balsa wood legs. Instead it’s Milner, who went from useful left-back to starting central midfielder in a Champions League final. When effort and determination become sexy, make him Miss World.

Manchester City – Vincent Kompany
“I’ve given myself the obligation to not think about anything regarding future contracts until my present contract is up. I’m really easy in my relationship with the club. It’s that good, there won’t be any panic on their side or my side. Let’s get the most out of these two years with City and international level and let’s see where we are at – no stress.” Anyone else worried Kompany is going to get released and not see it coming

Newcastle United – Mo Diame
Two. TWO. Newcastle have two measly players out of contract next summer. And given that Jack Colback was forced to train with the reserves by Rafa Benitez before being loaned out to Nottingham Forest for the second half of last season, I’ll go for Mo Diame.

Southampton – Alex McCarthy
Two. TWO. Southampton have two measly players out of contract next summer. Not quite a Colback/Diame situation here, but given that Steven Davis will turn 34 on the first day of next year, we best opt for new No. 1 Alex McCarthy. Unless they re-sign Stuart Taylor on a one-year deal.

Tottenham – Jan Vertonghen
Toby or not Toby, that is the question for Manchester United. But while Tottenham have accepted that one Belgian central defender is off at some point, Vertonghen was their most consistent player last season. His contract expires nest summer, so get him signed up after Harry Kane and Dele Alli.

Watford – Adrian Mariappa
Only two Watford players started more than 27 league games last season, a club who has rewritten the rules on squad fluidity. They have plenty of contracts expiring next summer, but anyone who leaves quickly gets replaced, often by two players. Let’s go Mariappa, because he at least started 24 times in the league season just gone.

West Ham – Declan Rice
West Ham are the masters of creating negative publicity, which means any good news story needs to be maximised. So it’s no surprise that Rice, out of contract next summer, has reportedly rejected a new offer worth £15,000 a week. They’re paying Jordan Hugill more than that, and he played 22 minutes last season.

Wolves – Carl Ikeme
Currently undergoing treatment for leukaemia, but Wolves are a good club. Ikeme is the longest-serving player at the club and a fan favourite. Whether he has fully recovered and returned to football by then or not, Wolves should – and surely will – rely on sentimentality and offer him a new contract. It is the right thing to do.