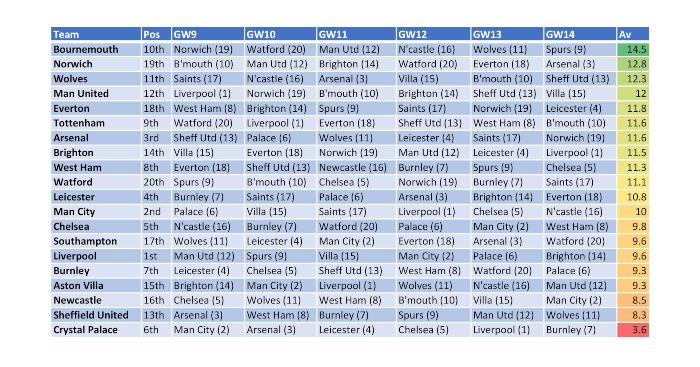 With the second international break of the season dragging towards its conclusion, it’s time to turn an eye back to a Premier League season which is already over one-fifth of the way through.

The table tells a number of stories. Liverpool are dominant, with Manchester City pulled into a chasing pack of familiar faces in Arsenal and Chelsea, as well as the unlikely lads of Leicester and Crystal Palace.

Mid-table sees 7th and 16th separated by just four points, with 18th-placed Everton and Norwich in 19 within a win of Manchester United in 12th. The biggest points gap between any two teams directly next to each other in the table is Liverpool’s eight-point advantage over City, followed by Watford’s three-point deficit to Norwich at the bottom.

The coming weeks will sort wheat from chaff, cream from sour milk, men from boys. Positions will be solidified and battle lines – be they relegation or otherwise – will be drawn. The next six games, leading into December, should be crucial in clarifying targets and expectations.

So this table could be even more instructive. It shows the current positions of every team’s upcoming opponents in an attempt to see who has the most and least difficult runs coming up.